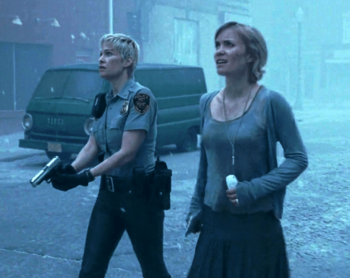 Guess which of these women is the tough, competent one.
"And over time [the writers] realized that you don't have to put a sword in a woman's hand to make her seem tough."
— Liv Tyler, on the development of her character Arwen from The Lord of the Rings
Advertisement:

A woman is shown as weak, incompetent, and ineffectual unless she dresses and behaves in a masculine manner (and in some cases, ditches her heterosexuality completely and becomes a Celibate Hero or Butch Lesbian because attraction towards men is a "weakness"), or is otherwise applauded for being "Not Like Other Girls." A variation is a Tomboy and Girly Girl scenario, where the tomboy is presented as superior. It's not hard to spot the Unfortunate Implications: that traditionally feminine traits are weak and worthless and women must "masculinize" themselves to be taken seriously. It takes the old prescriptivist gender roles and merely inverts them, creating a new prescribed gender role that female characters must adhere to or be shunned.

And yet, the trope persists, and we record it. Between a woman in trousers and one in a dress, the odds are the trouser lady is going to be the Action Girl of the pair and the one in the dress is going to be a Damsel in Distress. Variations exist, of course, especially in works after the third-wave "Girl Power" feminism. Many of the straight examples are from older works, when having proactive female characters at all was fairly edgy.

Compare Stop Being Stereotypical and Tender Tomboyishness, Foul Femininity. Contrast Agent Peacock, Girly Bruiser, Kicking Ass in All Her Finery, Lady of War, and Silk Hiding Steel, where it is the feminine character who is presented as capable, Vasquez Always Dies, where trouser-wearing and competence aren't enough to keep a woman alive, and Nothing Nice About Sugar and Spice when a female villain is traditionally feminine but very, very dangerous. Compare Female Misogynist. A woman who Hates Wearing Dresses might dislike dresses due to this viewpoint. See also Girl-Show Ghetto, where a dominantly feminine "girly" work is considered lesser quality, presumably due to this. See also Action Dress Rip, which can be interpreted as a justification of this trope in some circumstances.

Note: This is not an audience reaction trope. Only add examples where a character is derided by another character in-universe for having traditionally feminine traits, or where the work itself clearly portrays femininity as a sign of weakness, incompetence, or inferiority compared to other women.