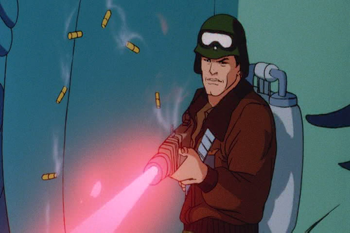 In an example of the nerfing of violence, almost all firearms in animated cartoons made since the late 1970s or early 1980s, if they appear at all, will be radically different from real guns, either in form or in function. Energy weapons are a popular choice.

Sometimes it gets explained (e.g. the villains in the show are Immune to Bullets, so the heroes have to use something else) but usually it's not.

Several reasons for this have been theorized:

Note that this is usually limited to bullet-firing weapons. Larger, more destructive weapons like cannons and RPGs may still be seen in works using this trope, perhaps because they are less easy to obtain in real life. In these cases, it will have large guns fire actual bullets, but still no realistic small arms.

This trope manifests in several ways:

As you might assume, this trope is most common in Western Animation coming from the United States for the above-stated imitability, due to the much higher rate of gun ownership in America compared to most other countries making the risk of children actually having access to a real firearm much greater there. This philosophy has sometimes extended to cartoons from previous decades or those imported from other countries. In general, most production houses have (under pressure from various media watchdogs who believed cartoon violence stimulated real violence) eliminated or altered anything and everything that looked like a real gun from their cartoons. Similarly, networks have gone back and Bowdlerized classic cartoons to remove firing guns and, in some cases, casual use of explosives. The reasoning behind these sometimes bizarre substitutions seems to be the belief that if it doesn't look like a real weapon, the poor child's psyche won't be warped and he won't have the desire to use a real weapon on someone else.

This trope is a fairly cyclical one, with guns going from "acceptable" to "not acceptable" and back again in the span of a handful of years, and sometimes within the same show. Whether or not it appears also depends greatly on a particular show's creator and how willing he or she is to fight for realism. A handful of exceptions seem to exist; Elmer Fudd-style double barrel shotguns and Tommy Guns seem acceptable regardless of what stage in the cycle everything else is at. Also, cartoons set in The Wild West still use realistic looking guns because of it being a famous historical time period.

Note: if personal laser beam weaponry ever becomes a reality, these "family-friendly" firearms might not be so family-friendly anymore.note To be specific, the wound would not be cauterized, and the laser would cause hundreds of small explosions, opening up a wound channel superficially similar to a gunshot wound. If Cracked.com is any indication,

however, laser weaponry already exists, and someone could get hurt or killed by such technology any day now.

Goes hand in hand with The Lethal Connotation of Guns and Others. For actual firearms being portrayed as family-friendly toys, see My Little Panzer. See also Abnormal Ammo, Trick Arrow, Inverse Law of Sharpness and Accuracy, Fantastic Firearms. Often given to a Badbutt. See also Frothy Mugs of Water when alcohol and other drugs receive similar treatment in works.

Alternative Title(s): Where Did They Get Lasers, Family Friendly Firearm