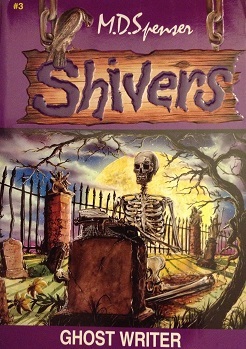 The first of many, many covers to show Dem Bones

"Do you enjoy being frightened? Would you rather have nightmares instead of sweet dreams? Are you happy only when shaking with fear? Congratulations!!!! You've made a wise choice. This book is the doorway to all that may frighten you. Get ready for cold, clammy shivers running up and down your spine! Now, open the door—if you dare!!!!"

Shivers is a children's horror series by M.D. Spenser with thirty-six books, starting with The Enchanted Attic and ending with Madness at the Mall. The series follows in the footsteps of Goosebumps, but has the tendency to be much darker. The series began to be released as ebooks in 2011, with the first seven having been released as of 2013 and none since.