WARNING — some unmarked spoilers for both games are present. 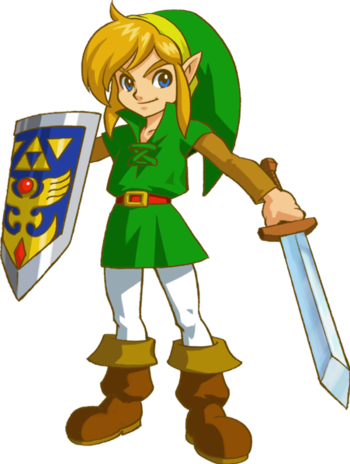 While riding through the countryside of Hyrule, the Triforce summons Link to Hyrule Castle, where he is sent to either Holodrum or Labrynna. He has a Triforce mark on his hand, which signifies him as a hero from Hyrule to the natives of those lands. Hyrule Historia states that he is the same hero from A Link to the Past and Link's Awakening. 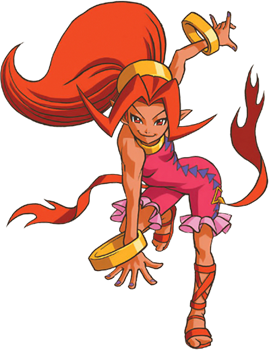 Din is the titular character of Oracle of Seasons, and shares the same name as the Goddess of Power. She holds the four seasons of Holodrum in their balance while in working in disguise as a popular dancer. 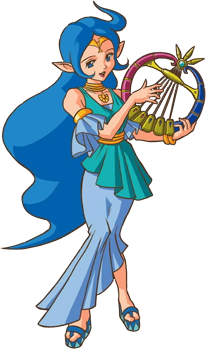 Nayru is the Oracle of Ages, and shares the same name as the goddess of wisdom. She's a main character in The Legend of Zelda: Oracle of Ages and has the power to jump through time. She's well known for her beautiful singing voice in the kingdom of Labrynna and wields the Harp of Ages, which holds a part of her powers. 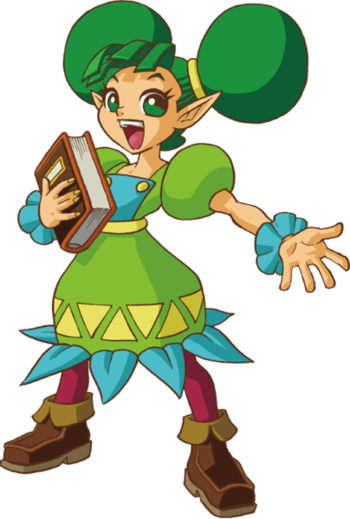 Farore is the Oracle of Secrets, and shares the same name as the goddess of courage. She's a side character in both of the Oracle games. She resides in the Maku Tree that connects Labrynna and Holodrum, and Link must bring a secret he finds in one region to her so he can use new equipment in the other. 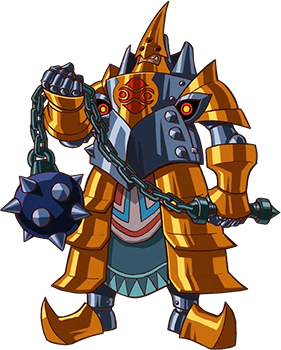 The main villain of Oracle of Seasons, he is known as the General of Darkness. He kidnaps Din and throws the seasons in Holodrum into chaos, spreading destruction through the land. He is revealed to be The Dragon to Twinrova. 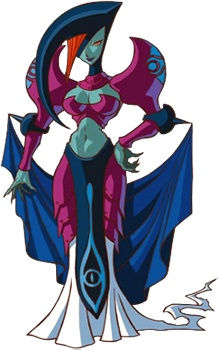 The main villain of Oracle of Ages, known as the Sorceress of Shadows. She possesses Nayru and goes back in time to screw up the history of Labrynna, spreading sorrow through the people. She is revealed to be The Dragon to Twinrova. 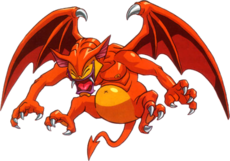 A red, bat-like demon that serves both Onox and Veran. 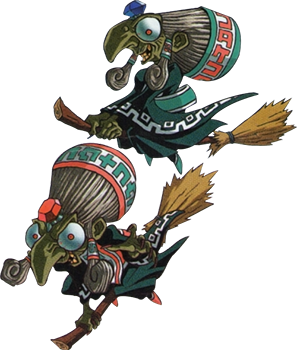 The twin sisters Koume and Kotake, who were Ganon's adoptive parents in Ocarina of Time, are the true villains of the Oracle games. They send Onox and Veran to Holodrum and Labrynna to create destruction and sorrow as part of a plan to resurrect the Demon King, Ganon. 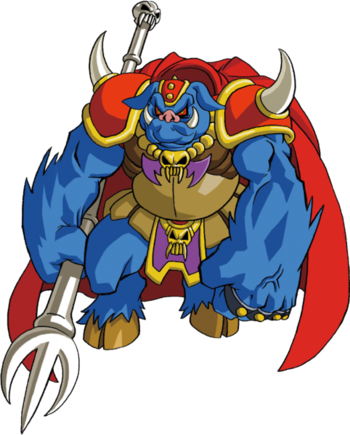 The Greater-Scope Villain of both games. At the start of the games he's dead, but Twinrova is planning to resurrect him the Dark Rites that Onox and Veran are aiding them with. The official timeline establishes this Ganon is the incarnation from A Link to the Past. 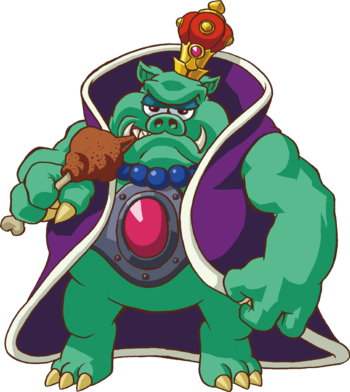 The Great Moblin is the ruler of the moblins and of their fortress in each game. When the games are played separately, he has a fairly straightforward story: in Labrynna he's blocking the way to the Bomb Flowers to make people pay for his own hand-made bombs, while in Holodrum he rules a more fortified keep and fires his cannons at anyone who comes near and, after being defeated, retreats to a shack in the Sunken City to make more bombs to sell and restore his funds.

In a linked game, he's originally from the land the first game is set in, and after his defeat there he's driven out of the country and settles in a new land — unfortunately for him, the same one that Link soon visits as well.

Bosses in Oracle of Seasons

Aquamentus, a one-horned dragons, is the first true boss in the game, and the guardian of the Gnarled Root Dungeon and the first Essence of Nature, the Fertile Soil.

Dodongo is a dinosaur-like beast fought as the boss of the Snake's Remains, where it guards the second Essence of Nature, the Gift of Time.

Mothula, a giant one-eyed moth, is the boss of the Poison Moth's Lair. Once the giant moth is defeated, Link obtains the third Essence of Nature, the Bright Sun.

A crab-like monster with a single giant eye, Gohma guards the fourth Essence of Nature, the Soothing Rain, within the Dancing Dragon Dungeon.

An urchin-like eyeball monster found inside the Unicorn's Cave, where it guards the fifth Essence of Nature, the Nurturing Warmth.

A great mobile plant found in the Ancient Ruins. Defeating it will reward Link with the sixth Essence of Nature, the Blowing Wind. 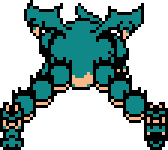 A two-headed dragons whose heads continue to fly around after being severed. Gleeok is found in the Explorer's Crypt, and surrenders the Seed of Life, the seventh Essence of Nature, once he is defeated.

The Medusa Head is the boss of the Sword & Shield Maze, where it keeps watch over the eighth and final Essence of Nature, the Changing Seasons.

Minibosses in Oracle of Seasons

A living face inscribed on the floor of its room, who attacks by creating pits in the floor and sending swarms of bugs after Link. Facade is fought in the Snake's Remains, and later in Onox's Tower.

A trio of squid-like creatures found in the Poison Moth's Lair. The Omuai must be lifted out of their pits to be defeated, which will allow Link to strike at their soft undersides.

A shrouded wizard fought as the boss of the Dancing Dragon Dungeon.

A saber-toothed cat with a vulnerable tail and a propensity for rolling attacks. Syger is fought as the miniboss of the Unicorn's Cave.

A pair of ghostly sisters fought throughout the Explorer's crypt. They are Margaret, who carries a lantern and leaves a trail of fire behind herself as she flies, and Amy, who uses a sword.

A spirit of ice and fire fought in the Sword & Shield Maze, who alternates between fiery and icy forms.

Bosses in Oracle of Ages

A pumpkin-headed figure fought at the end of the Spirit's Grave, where it guards the way to the Eternal Spirit, the first Essence of Time.

Head Thwomp is a floating stone head with a hollow top and face on each of its four sides. It guards the second Essence of Time, the Ancient Wood, at the end of the Wing Dungeon.

A ghostly being fought in the Moonlit Grotto, where she guards the third Essence of Time, the Echoing Howl. 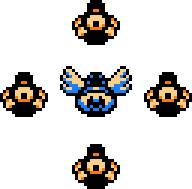 A flying eye surrounded by smaller flying eyeballs, which Link encounters at the end of the Skull Dungeon and fights to obtain the fourth Essence of Time, the Burning Flame.

Once Link reaches the end of the Crown Dungeon, this living cloud challenges him to a game — it will divide itself into multiple parts and, if Link can piece them back together and blow them away, he will win. In the meantime, these pieces will try to kill him. If Link wins the deadly game, he will be rewarded with the fifth Essence of Time, the Sacred Soil.

A giant octorok with an invulnerable shell, fought in the Mermaid's Cave. Defeating it will award Link with the sixth Essence of Time, the Lonely Peak.

A jellyfish-like creature found guarding the seventh Essence of Time, the Rolling Sea, inside Jabu-Jabu's Belly.

A levitating statue consisting of a head and a pair of hands, Ramrock guards the eighth and final Essence of Time, the Falling Star, at the bottom of the Ancient Tomb.

Minibosses in Oracle of Ages

The miniboss of the Moonlit Grotto.

The miniboss of the Skull Dungeon.

The miniboss of the Crown Dungeon.

The miniboss of Jabu-Jabu's Belly.

The miniboss of the Ancient Tomb.

Other names: The Bojo Trees (French) 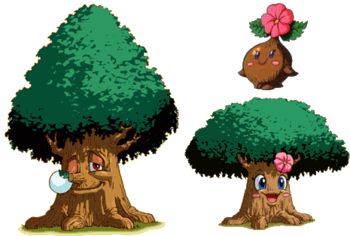 The Maku Trees of Holodrum and Labrynna are the guardian spirits of the land. When the title oracle is kidnapped, they task Link to retrieve the Essences of Nature/Time that can stop Onox and Veran. The Maku Tree of Holodrum is male, the one of Labrynna is female.

Ricky, Dimitri, and Moosh are Link's animal companions who help him cross impossible terrain. Ricky is a Boxing Kangaroo that can jump up cliffs and over pits, Dimitri is a red dodongo that can swim across seas, and Moosh is a winged bear that can fly over large gaps. 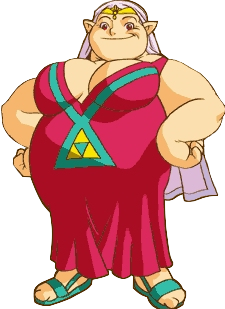 Impa is Zelda's nursemaid. In the prologues of both games, she's on her way to try and get the titular Oracle to safety, but fails to do so before the villain finds them. 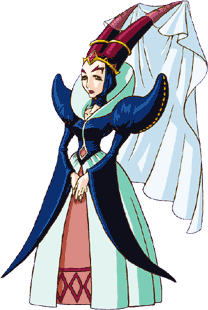 Ambi is the Queen of Labrynna in the distant past when it still had a monarchy. She's come under the influence of Veran in Nayru's body, and is building Ambi's Tower to the detriment of the stability of her village. 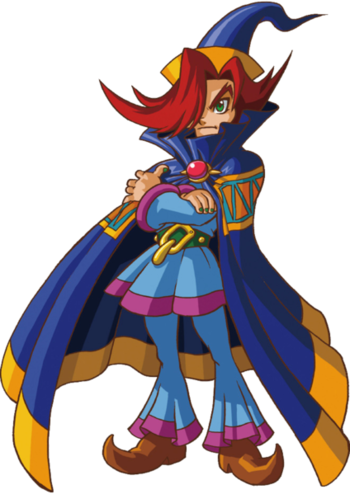 An obnoxious young man first seen as Nayru's bodyguard. When the Oracle is kidnapped by Veran, he goes tearing off after them, screaming for Nayru. He occasionally shows up to give Link hints, usually nagging him for stopping to help others instead of rescuing Nayru.

Found in Oracle of Seasons, she's trying to care for a lot of Cuccos but doesn't know what she's doing. She plays a part in the game's trading sequence.

Malon's father, he went adventuring up Mt. Cucco and fell asleep. He plays a part in the game's trading sequence. 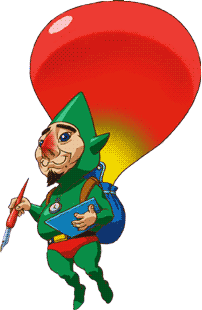 The goofy-looking man who rides around by tying a balloon to his belt, floating in place. He appears in Oracle of Ages where he sells Link a sea chart needed to sail to Tokay Island.
Maple 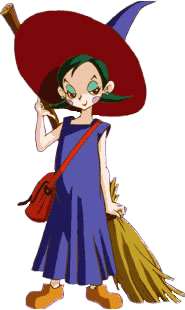 Granddaughter of Syrup, the witch who sells you potions in the previous games. She appears after you defeat a certain number of enemies, triggering a sort of mini-game where you bump into each other and each drop some of your items. You then have to race with her to collect each other's items. She often drops rings, Gasha seeds, and even potions and a piece of heart. 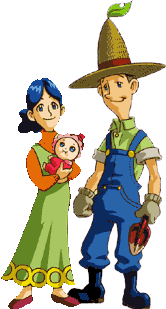 A local family in town that asks you to name their newborn son. The son grows up differently based on how you interact with the family during the game. 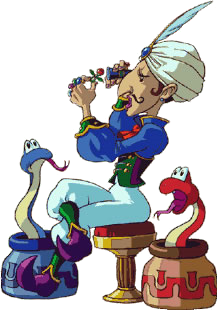 Owns a jewelry store in both Horon Village and Lynna City. He appraises and stores rings for Link throughout the game.
Rosa 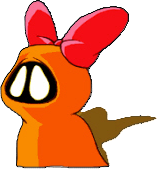 A female Subrosian "pop-star" who is distinguishable by the huge ribbon she wears. The key she carries can open any lock; a pity she doesn't follow you out of Subrosia. 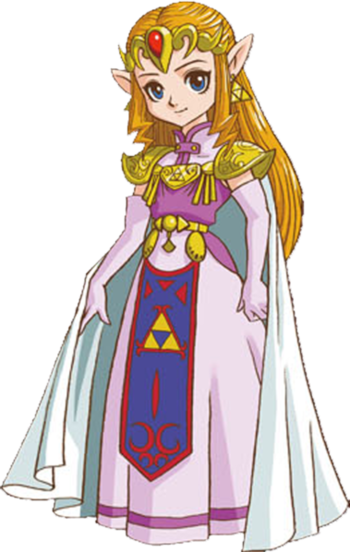 The Princess of Hyrule, she sends Link to Labrynna and Holodrum to aid the endangered oracles. The joined game reveals that the true aim of Koume and Kotake is to sacrifice her in order to resurrect Ganondorf. 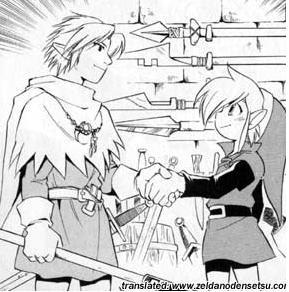 An ancestor of Link who lives in Labrynna.