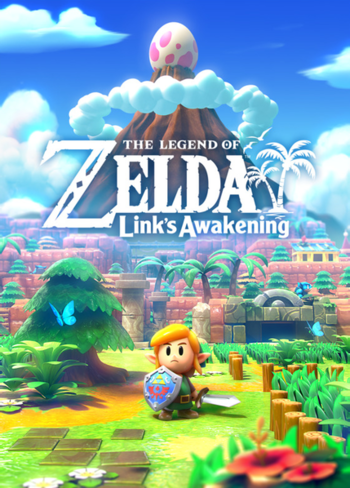 A dream come true!
"Sleepers wake, dreams will fade...
Although we cling fast.
Was it real, what we saw?
I believe..."
— Ballad of the Wind Fish
Advertisement:

Following the defeat of Ganon in The Legend of Zelda: A Link to the Past, Link left Hyrule to go on a Journey to Find Oneself and train in preparation for any future threats to Hyrule. After completing his travels, which were implicitly the events of the Oracle games, he began sailing back towards Hyrule. However, while sailing back, his boat was suddenly caught in a violent storm and struck by lightning. When he awoke, he discovered that he had been shipwrecked on the shores of Koholint, an island home to a giant egg that rests upon its mountain's peak.

Five years after its initial release, the game received an Updated Re-release on the Game Boy Color, titled Link's Awakening DX. This version featured modest additions and improvements, mainly in the form of the new color graphics, a brand-new dungeon that took advantage of them, and a photography sidequest that came in conjunction with Game Boy Printer functionality. A remake for the Nintendo Switch co-developed by Grezzo, which includes a brand-new dungeon-creation mode among other improvements, was released on September 20, 2019. In November, 2021 a Game & Watch would release which contained The Legend of Zelda, Zelda II: The Adventure of Link, and the original Game Boy version of this game.

This game takes place in the "Hero Defeated" timeline, after A Link to the Past and before The Legend of Zelda: A Link Between Worlds. It is also linked to the Oracle games, which use the same engine and many of the same assets, but their exact connection to this game is inconsistent Depending on the Writer.note According to Hyrule Historia, this game takes place immediately following the Oracle games, but was later stated to take place before them. Considering that the Oracle games end with Link departing on a seacraft similar to the one he's seen on at the beginning of this game, the former interpretation was probably the original intention, while the latter may have been intended to stave off speculation that Link died at sea after this game.

THIEF, are you listening to me?
Yeah
• No...
Feedback