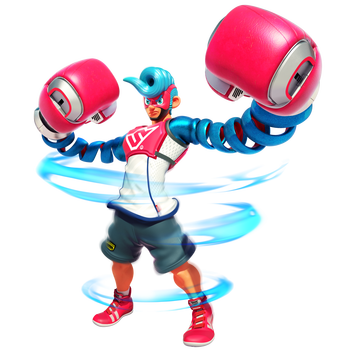 A balanced fighter whose ARMS take the shape of springs. He's hot-blooded and has a strong determination to win. His unique traits are that he can repel punches while charging with a shockwave, and that once he hits critical health, his ARMS will stay charged. 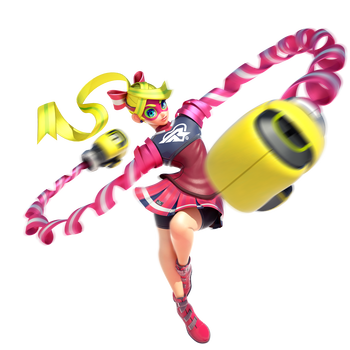 The Airess
Voiced by: Momoka Kawasaki

An agile fighter with ribbon ARMS who's also an Idol Singer. Her unique traits are that she can jump four times consecutively, air dash twice in a row, and that she can fast-fall to the ground which charges her ARMS instantly. 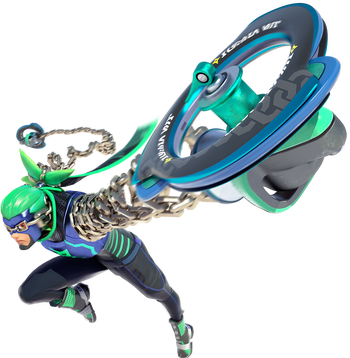 The Student of Stealth
Voiced by: Kenji Takahashi

A student ninja who fights with chain ARMS. His unique traits are that he can warp short distances while air-dashing and he can teleport to the side while blocking attacks. 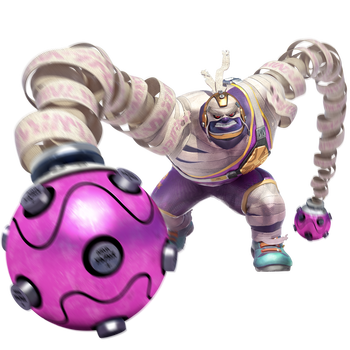 A massive mummy who can extend his punches with his bandages. He does not flinch from weak ARMS punches, and his unique trait is that he can regain a bit of health when he guards. 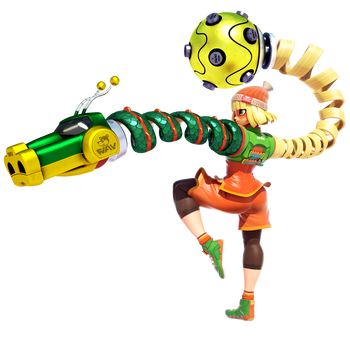 A martial artist with noodle ARMS who serves as the poster girl for her family's ramen shop. Her unique trait is that she can deflect attacks while dashing with her kicks, even in mid-air. Her left arm can turn into a dragon after a long charge or successful throw and can stay charged until knocked down. 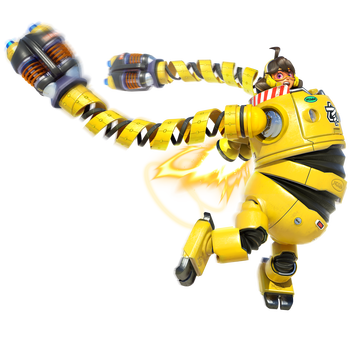 A teenage girl not born with the power of ARMS but pilots a Mini-Mecha in battle to keep up. The mech allows her to armor through weaker attacks much like Master Mummy and her unique trait is the mech's jetpack, which gives her more agility for dashing and hovering in the air. 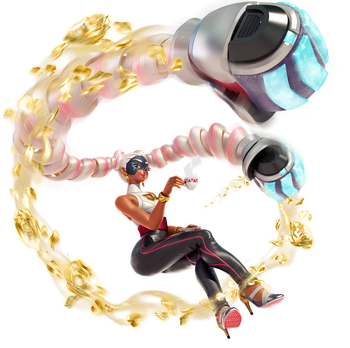 A famous movie star whose ARMS are in her hair (leaving her with regular arms where they should be). Her unique trait is her Actress Aura, which can slow down time to allow her to dodge punches, float, and charge her attacks even in midair. 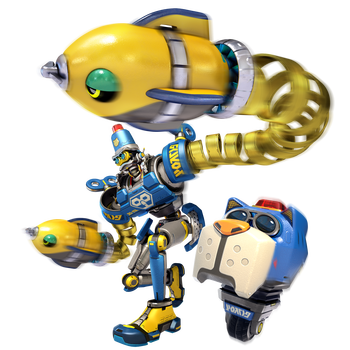 A tag team of fighters consisting of a clockwork robotic cop and his similarly mechanized canine companion. Their unique trait is that they fight as a team, with Barq being an AI-controlled assist. Barq attacks on his own and can take hits for Byte, and Byte can use Barq as a springboard to parry punches and get a high jump. 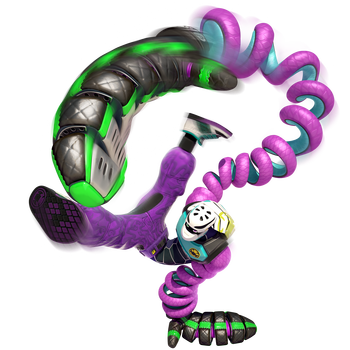 A professional snakeboarder who fights with snake ARMS and his motivation is to increase views for his livestreams. His unique trait is both his ground and air dash go faster and further while his arms are charged. Also when charged, his forward dash allows him to duck under punches. 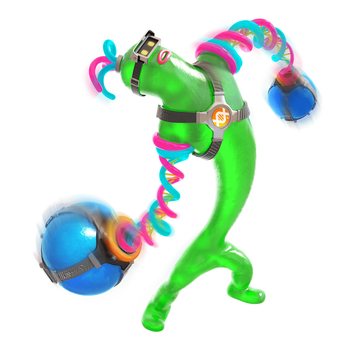 The "Man" of Mystery

A green blob creature with ARMS designed after DNA double helices who was accidentally created by scientists researching the ARMS phenomena. His unique trait is his unusual body, which allows him to move in weird ways for added defense and to confuse the opponent. 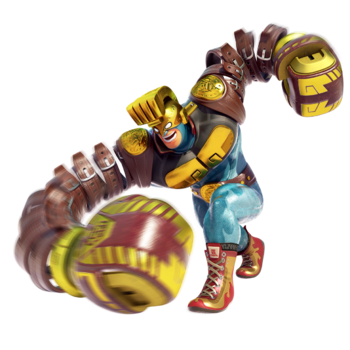 The Commish
Voiced by: Dominic Allen

The head of the ARMS league, and the Champion of the Grand Prix. Fitting his status, his ARMS look like belts. Originally the Final Boss of Grand Prix mode, he is the first post-release fighter introduced to the game, made playable in the first update. His unique trait is that charging his ARMS or completing a throw will buff his body mass to give him armor from weak attacks. Like Spring Man, he can charge to repel punches and his ARMS stay permanently charged at critical health and he will also stay buffed. 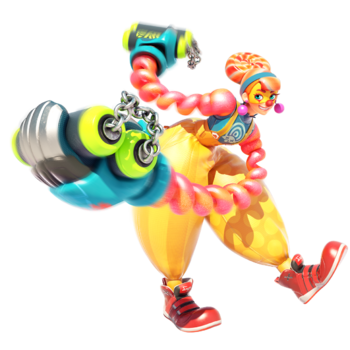 A traveling fighting clown with gummy candy ARMS introduced in the third update of the game. Lola Pop has traveled the world doing street performances and hopes to one day open a circus of her own. Her unique trait is the ability to quickly inflate her whole body; which allows her to move while blocking, bounce on the ground and air-block. 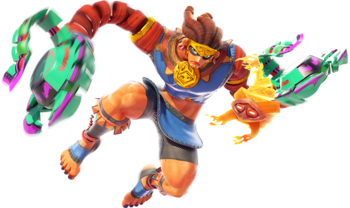 A proud, spiritual warrior with woven bracelet ARMS introduced in the fourth update. Misango is devoted to defending his homeland and people, the Misangans. He enters the ARMS tournament in order to prove that the Misangan fighting technique is superior above all others. His unique trait is that he fights with a "mysterious entity" mask that can imbue him with randomly generated buffs as well as shield him during a charge. 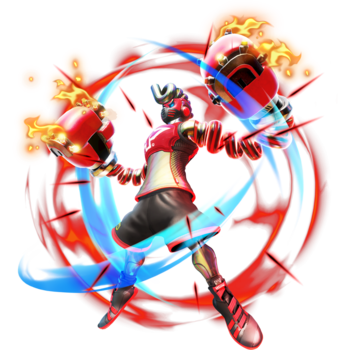 A strange robotic fighter resembling Spring Man. He shows up to challenge you in Grand Prix if you're doing TOO well. Originally an NPC Bonus Boss, he became playable with the fourth update. His unique trait is that charging his ARMS will release a energy pulse that disables any ARMS that comes in contact with it. Like Spring Man, he can also parry punches after charging but unlike Spring Man, he doesn't stay charged at low health. 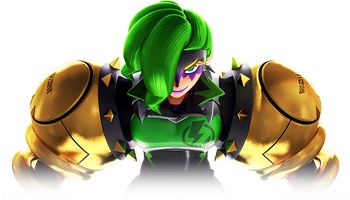 A brilliant scientist who's the head of ARMS Laboratories. She's obsessed with ARMS research and Springtron, Hedlok, and Helix are the results of her experiments. She has even experimented on herself, which gave her a set of ARMS of her own in the form of Tesla coils. Dr. Coyle was hinted at in the game previously and made her debut for the fifth update of the game. Her unique traits are that she can turn invisible during a block, levitate and air-guard, and gain a third ARM when charging her punches. 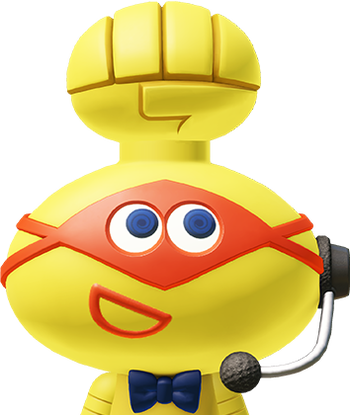 The announcer of the ARMS League. He's usually quiet, but always game to talk about the ARMS game. 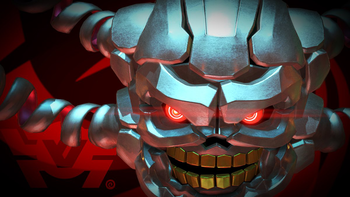 The Secret Weapon
A floating skull-shaped robot that was originally being developed in a research facility by Dr. Coyle before running amok. It fights by latching itself onto the bodies of other fighters to battle.

He becomes semi-playable in Version 2 in the special "Hedlok Scramble" mode, where combatants fight for Hedlok's body to temporarily assume control of him.

The Cell
Prototypes of Helix made by ARMS Laboratories. They are the enemies fought in 1-on-100 mode.