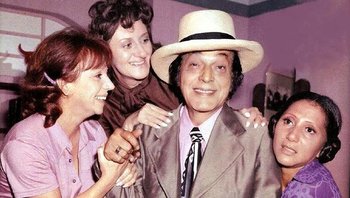 O Bem-Amado (English: The Beloved) is a Brazilian telenovela that first aired on Rede Globo in 1973. It is based on a play by Dias Gomes called Odorico, o Bem-Amado ou Os Mistérios do Amor e da Morte, written in 1962. It was the first Brazilian color telenovela. It was shot in Rio de Janeiro. A notable feature of this telenovela was its music, composed by Vinícius de Moraes and Toquinho.

It had 178 episodes and is one of the most acclaimed and popular soap operas in Brazil. In 1980, a sequel was made in format of TV series, with the return of most of the the main cast. It lasted four years.

The telenovela tells the story of Odorico Paragaçu, mayor of Sucupira, a small town in the Northeast of Brazil. Odorico's biggest dream is to inaugurate the majestic cemetery he built, but to his unpleasant surprise, almost no one dies in the city. He begins to use unorthodox methods to get a dead man, but his political enemies and even the incompetence of his allies will make his task more difficult...