These are the characters that debuted in Yakuza 2, the second game of the Yakuza series, as well as its remake Kiwami 2. 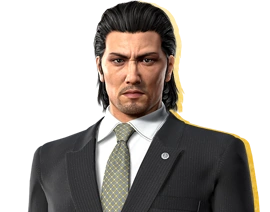 "It may not seem it, but I'm trying my best to navigate this path I'm on."

The son of Sohei and Yayoi Dojima. Kiryu seeks him out in the second game as someone who can rebuild the Tojo Clan to glory after Terada's death, not realizing he lost himself after his father's murder and served time. When Kiryu finds him, he's pretty much become just another street punk, but he's convinced to aid Kiryu against the Omi clan, and eventually becomes the Sixth Chairman of the Tojo Clan. He's since remained a staunch ally of Kiryu's, but struggles to maintain control the Tojo Clan amid its financial woes and power struggles from within. 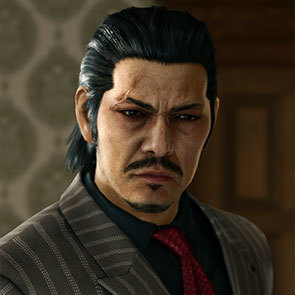 Patriarch of the newly created Uematsu family, introduced in Kiwami 2. He's the one who brings the most money in the Tojo Clan, which Terada recognized and promoted him to a direct patriarch. Because of this, is the one closest to the seat of Clan Captain. With a knack for finance and money, Uematsu is the opposite of Kiryu: A yakuza who thinks with his head rather with his fists. Because Majima is also gunning for the seat of Clan Captain, Uematsu is hostile towards him. 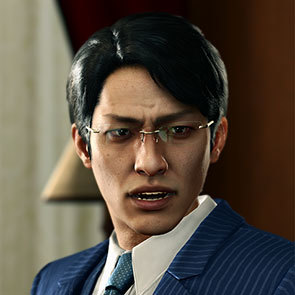 "What is the meaning of this, Majima?"

Patriarch of the newly created Ibuchi family introduced in Kiwami 2 and originally one of Uematsu's men. Having a unique background in consultation, he possesses an overwhelming amount of knowledge has a capacity for making rational judgments. He's the second money bringer of the clan after Uematsu and feels Majima is a threat to his or Uematsu's position as future Clan Captain. He has an open disdain for senior management, who he feels are fixated on old values like moral codes and humanity, preventing the organization from reaching its potential. In truth, he was one of the many catalysts of the Omi/Tojo conflict as he has Ryota kill several members of the Omi Alliance to settle debts of his to start a war. Ultimately he was outed facing prison for his proxy murder. He opts to kill himself instead to kickstart the war. 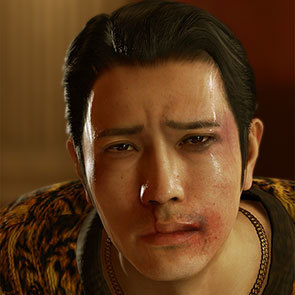 "If anything, I want you become Clan Captain, boss."

A new member of the Majima family introduced in Kiwami 2, and seems to respect his boss a lot. He entered the Majima family one year prior to the events of Majima's story, by literally knocking on their door and asking to join them. A little careless, he's respected by the senior family members because of his sociable personality, and is entrusted with driving and taking care of personal belongings. 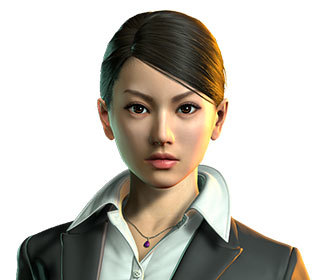 Kaoru as she appears in Kiwami 2.

"You're a Yakuza, not a fuckin' weasel. You should be putting yer ass on the line."

The Lead Detective of the Osaka Organized Crime Division who is famed for her spirit and determination, she's earned the title of 'Yakuza Eater/Huntress' for her work in dealing with the clans. She first appears placing Kiryu under arrest when he's in Osaka, and while she did it under orders to place him under protection, she has her own agenda. She grew up never knowing who her parents were, and believes he's the link to the truth behind her lost past.

The Deuteragonist and Kiryu's Love Interest in Yakuza 2, she returns briefly in the prologue for Yakuza 3 to tell him goodbye as she heads to the United States for special training, putting her relationship with him on hold to see how far her career can take her. Although they agree to find each other when that time has passed, she hasn't been seen in the series (or its spin-off titles) since. 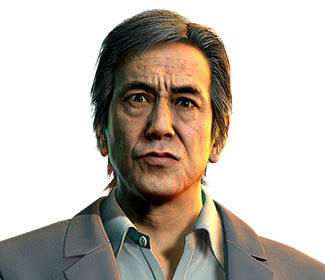 Kawara as he appears in Kiwami 2. 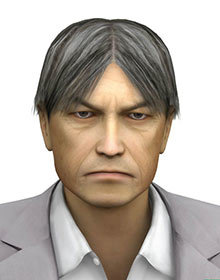 Kawara as he appears in Yakuza 2.

"A cop's gut instinct is more than just some guess."

Or 'Killer Kawara', so named for the amount of suspects who die resisting arrest. A veteran cop who is viewed with suspicion by the other characters for keeping secrets from everyone and his and lack of morals, which includes Date, who once worked under him. He had previously investigated the Jingweon massacre incident along with Bessho, and joins the police investigation when they return. 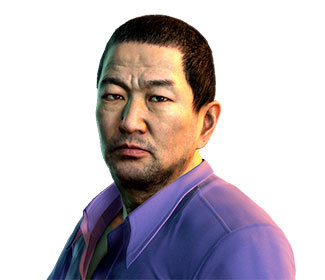 Bessho as he appears in Kiwami 2 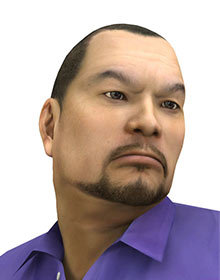 Bessho as he appears in Yakuza 2

"You only say that 'cause you don't know how scary the Jingweon really are! Women and kids are just more meat to 'em!"

The Division Chief of the Osaka Police Organized Crime Unit and Kaoru Sayama's boss. He used to work in Kamurocho before being transferred to Osaka, and remains in close contact with them. On Sudo's request, he orders Kaoru to place Kiryu under protective custody to keep him from getting killed during the Tojo/Omi peace talks. He was involved with the investigation of the Jingweon Mafia along with Jiro Kawara, and finds himself involved once again when they return after 26 years. 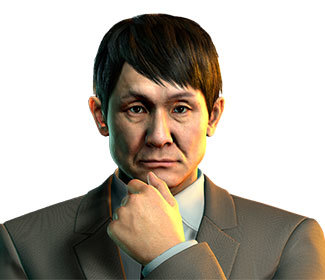 Kurahashi as he appears in Kiwami 2 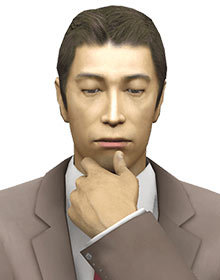 Kurahashi as he appears in Yakuza 2

"You have no idea what I'm capable of!"

The Chief of the Public Security Foreign Affairs Division of the Tokyo Police, who's been investigating the Jingweon Mafia's presence in Tokyo for several months alongside Sudo. Following the bombing on Millennium tower, he informs Date of their presence, and suspects Kazuki is actually one of them.

Late in the game, he takes Date hostage to lure Kiryu, Kaoru and Kawara to the Millenium Tower, revealing he's one of the survivors of the Jingweon Massacre, while taking out The Florist of Sai's network in the process. He reveals to Kaoru the identity of her real father before shooting him repeatedly. After Kiryu beats him, he attempts to shoot Kaoru but her father takes the bullet, and the two proceed to shoot Kurahashi dead before Kawara dies.

"I dunno what happened, but I do know this! It's the Tojo that made Kaoru's life this hell!"

The proprietress of the bar "Aoi", she's also Kaoru's foster mother. She had worked as a doctor several years before and has known Kawara for many years. She knows much of the truth behind Kaoru's past, including who her parents were, but is determined to keep it a secret from her.

"How's about we see here and now...which one of us is the real dragon!" 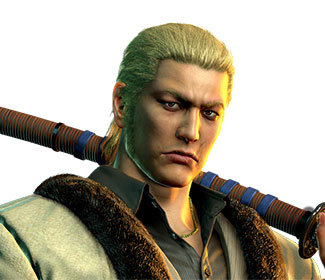 Ryuji as he appears in Kiwami 2

One of the main antagonists of the second game, Ryuji is the adopted son of Omi Alliance Chairman Jin Goda and the second Chairman of its Go-Ryu Clan. He was behind the Omi's involvement with Jingu in the previous game and was involved with Terada's supposed murder, in order to start a war between the Omi and Tojo Clans with the help of the Jingweon mafia. He's also determined to bring down Kiryu and claim the title of The One True Dragon. He's actually one of the Jingweon mafia survivors, and learns that Kaoru Sayama is his half-sister. He suffers from life threatening injuries at the end of the game after putting a stop to the villains ambitions, but doesn't go out until he and Kiryu have determined who the one true dragon is in one final fight.

He was announced as one of the new playable protagonists in the spin-off title Yakuza: Dead Souls, a non-canon entry that allowed him to be brought Back from the Dead under a "what if" scenario where he was merely defeated at the end of Yakuza 2 and ousted from the Go-Ryu clan, and aids the others in their fight against the zombie outbreak. 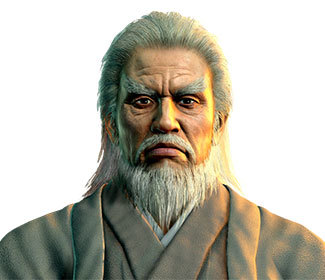 "If the Omi can be of help along the way, it'd be my pleasure to assist you."

Jin Goda is the fifth chairman of the Omi Alliance and the foster father of Ryuji Goda. At 65 years old, his many years of fighting have left him bound to a wheelchair. Kiryu meets him following Terada's death in hopes to reach a truce between the two clans and avert war. Although the elder Goda accepts, his son Ryuji stages a coup to prevent it from happening and has him kidnapped, leaving his whereabouts unknown throughout most of the game. 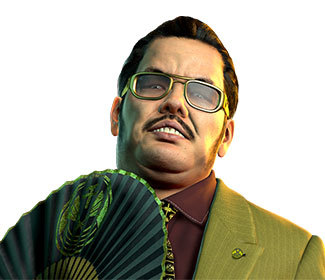 "Lemme know if ya need incense money for Terada's funeral. I'd be happy to spot ya a billion or two."

The man behind most of the wealth of the Omi Alliance, he's a smug, smirking jerk whose only redeeming attribute is his skill with money. 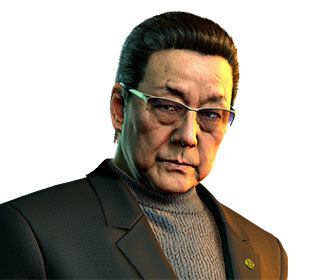 Takashima as he appears in Kiwami 2 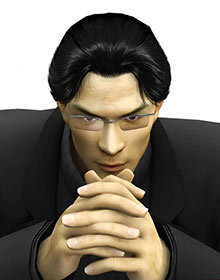 Takashima as he appears in Yakuza 2

"God, you're all so stupid! Why do you trust people like this? It's ludicrous!"

Ryo Takashima is the chief director of the Omi Alliance and Patriarch of the Takashima Clan. An intelligent individual, he appears to be Jin Goda's right-hand man and a strong candidate as his successor. Friendly and civil at first, following Ryuji's insurrection, his true colors are quickly revealed.

Yuki
The former number one girl at Club Sunshine, now the owner of Club Four Shine. See her entry on the Yakuza 0 character sheet for more information.
Koyuki 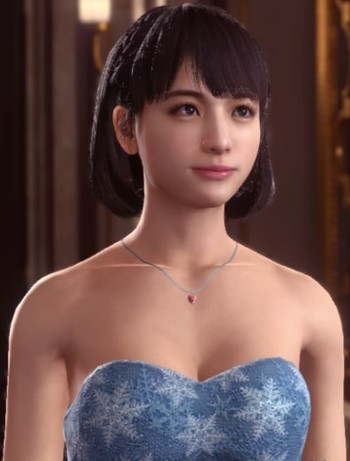 The number one hostess at Club Four Shine, not that there's much competition for that spot at the start.
Kana Momonogi

The number one hostess at Hiroshima Sweet Goddess.
Aika

The number one hostess at Osaka Heaven's Goddess.
Shoko Takahashi

The number one hostess at Kamurocho Divine Queen.
Yua Mikami

The number one hostess at Kineicho Platinum Goddess.
Kirara Asuka