These are the characters that debuted in the third game of Sega's long-running Yakuza series, Yakuza 3.

"Morning Glory" ("Sunshine" in the early English localizations) is an orphanage sited in Okinawa, with connections to the Sunflower orphanage where Kiryu, Nishiki, Yumi, and Haruka grew up in. After the previous owner had passed away, Kiryu decided to take over the place along with Haruka following the events of the second game. There are eight orphans residing in the orphanage aside from Kiryu and Haruka.

Things change for them in Yakuza 5 when Kiryu and Haruka leave the orphanage, in order for the latter to pursue a career as an Idol Singer, and so the older kids wouldn't have to make sacrifices to support the orphanage. They're all still there by Yakuza 6, now teenagers, and play a large part in what kicks off the game's plot. 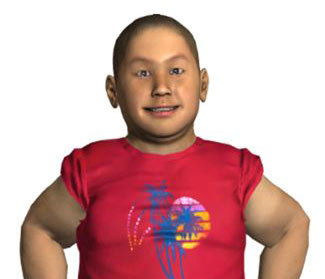 Taichi as he appears in Yakuza 3.

A tough boy with an aspiration of becoming a professional wrestler. Ten years old as of Yakuza 3, and in his second year of middle school by the fifth game. However, he planned on getting a job to support the orphanage instead of pursuing his education. When Kiryu and Haruka leave the orphanage, he's the one who takes over in their absence, and writes Haruka a fan-letter using the pen name "Dragon Mask Man". 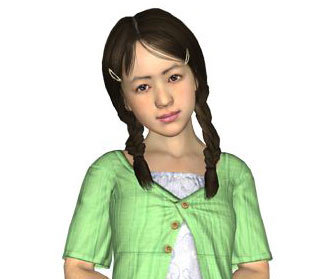 Ayako as she appears in Yakuza 3.

The eldest of the orphans second to Haruka, age 11 as of Yakuza 3. A quick thinker who is also quiet, caring and committed, she carries a motherly role to the orphanage, but tends to put others ahead of her own needs. By the time of the fifth game, she texts Haruka letting her know she and the others watch her on TV. Like Taichi and Koji, she was planning to find work to support the orphanage at the expense of her education.

In Yakuza 6, she learns of the scandal surrounding Haruka and catches her trying to leave the orphanage because of it, but is told to keep it a secret from the others. When Kiryu returns without her, she realizes she wasn't told the whole truth either, and informs him of the scandal and why she left. 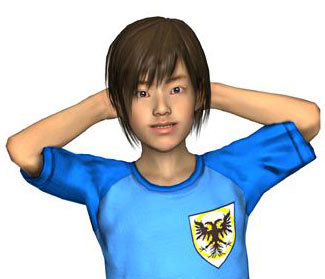 Koji as he appears in Yakuza 3.

An active boy who is into sports, particularly soccer and baseball, and generally plays with the other orphaned boys on the beach. Ten years old as of Yakuza 3. Like Taichi, he's also in his second year of middle school by the fifth game, and also planned to find work to support the orphanage instead of going to high school. 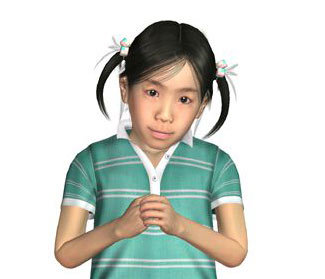 Eri as she appears in Yakuza 3.

A girl who has trouble getting along with other orphans, who took it hardest when she lost her parents. She tries fitting in but learned it was best to just be herself. Nine years old as of Yakuza 3. 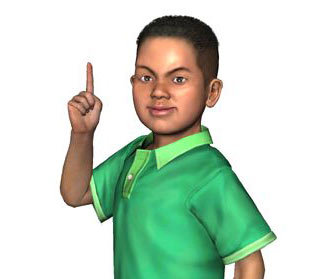 Mitsuo as he appears in Yakuza 3.

The son of an American soldier and a Japanese woman. He was orphaned when his father returned to the United States without even knowing he had a child and his mother died. He's nine years old as of Yakuza 3, and in his first year of middle school by Yakuza 5. He's got a huge crush on Riona.

In Yakuza 6, he's become an active baseball player at his school, and his skills have been recognized to the point that it could earn him a college promotion. Now that Haruka is known to have been raised by the yakuza and lives in the same orphanage they do, the others fear it will interfere with his chances to make it big in life, which plays a large part in why she leaves them. 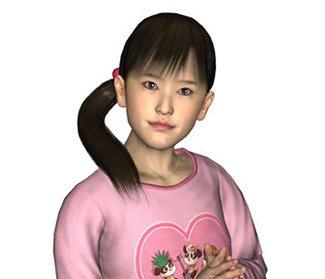 Riona as she appears in Yakuza 3.

A girl whose parents died in a burning building and had her arms burnt badly. The trendiest kid at the orphanage, she's into fashion and clothes. Mitsuo also has a crush on her. Nine years old as of Yakuza 3. 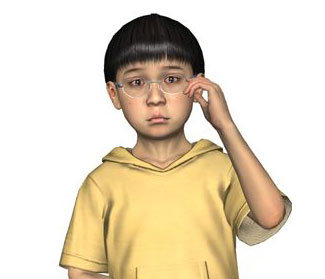 Shiro as he appears in Yakuza 3.

A shy and smart boy who wants to grow up to be a doctor since his parents died of different diseases, and enjoys reading books about space. Eight years old as of Yakuza 3. In the fifth game, he writes Haruka a letter under the pen name "Professor Cosmos". 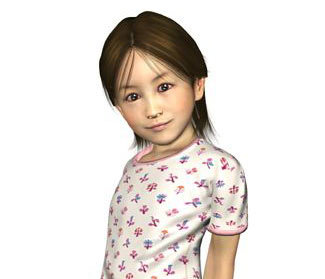 Izumi as she appears in Yakuza 3.

The smallest and youngest of the orphanage. She is very lonely and quite selfish. She takes care of a dog named Mame (Rex in the English version) who reminds her of her previously owned pet dog. Eight years old as of Yakuza 3. 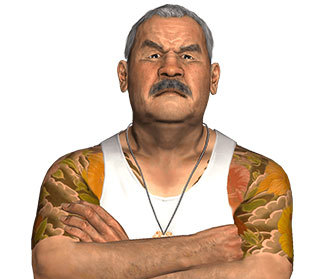 The Patriarch of the Ryudo Family in Okinawa who threatens Kiryu with a sudden eviction notice to give up the land the Orphanage is on. When Kiryu decides to discuss the issue, he turns out to be quite a reasonable and decent guy and is only looking out for the Okinawa's economy. But it's when his foster daughter Saki is taken from him that the two get on good terms, and swears an oath of brotherhood to Kiryu when he rescues her. A year later, he's shot around the same time Daigo is, which kicks off the game's main plot. 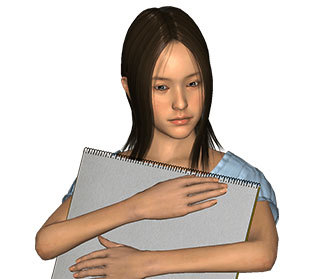 A mute girl that comes from an unstable family, which leaves her under Nakahara's greater care. She only communicates by showing her drawings on her sketchbook. 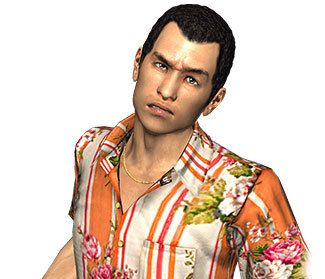 "I've got a viper on my back. The soul of Okinawa. No matter what comes my way, I'll strike at it, fangs out."

The captain of the Ryudo Family and the most loyal friend to Kiryu in the third game. 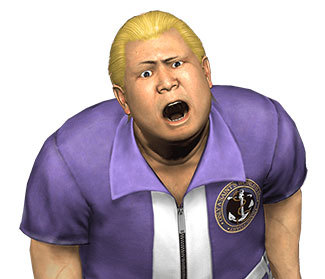 A young blond-haired lieutenant of the Ryudo Family who is usually praised by the merchants of Downtown Ryukyu for protecting their businesses. 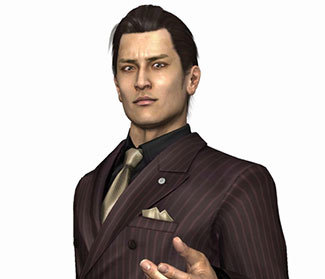 "...Every last thing I do is done with the aim of aiding the Tojo Clan. A motive I'm sure Daigo-san would approve of. Anyone that stands in my way will be eliminated. Even if that person… is one of our own.

The Chairman of the Tojo Clan's Hakuho clan, a family that emerged during the time gap between the second and third games. An extremely rich young man who was brought into the Tojo Clan by bribing Kanda. Since then, he's come into his own under Daigo's wing and suffers an erratic breakdown when Daigo is shot, which sets the events of the third game into motion. 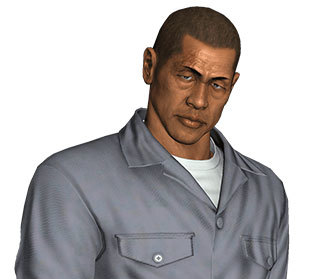 Hamazaki as he appears in Yakuza 4

Patriarch of the Hamazaki family that works on the fringes of the Tojo, they are vital but mistrusted for their close links to the Chinese Triads, and helped take over Yomohama with the help of Lau Ka Long. Big, ugly and nasty, Hamazaki is an opportunistic thug who will do whatever it takes to succeed. He goes to jail at the end of the third game, appearing in the fourth game where he recognizes Saejima and uses him to plot an escape. He subsequently not only starts to see Saejima as a genuine brother, but also gains possession of Okinawa Penitentiary No. 2's ledger, sparking off Kiryu's involvement. He suffers several critical injuries in the process, and after helping Kiryu and Yasuko escape the prison's staff, they reopen, leading to his death. 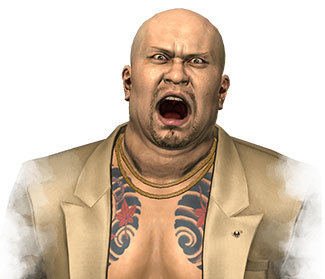 The third patriarch of the Nishikiyama family. Loud, rude, violent and ignorant, he's against Kiryu returning to the Tojo Clan considering what happened to the previous patriarchs of the family. When Daigo is shot, he's just as eager to claim the position of Chairman like the others.

Captain of the Nishikiyama Family and the most violent member of the Tojo Clan. Even Kanda views him as most dangerous member. Due to his rank, he's trying not to needlessly stir things up, but tends to resort to violence because it is in his nature. 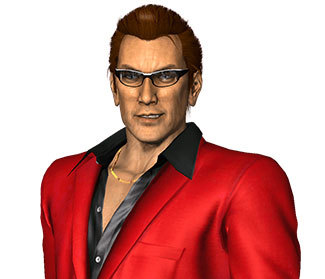 The ruthless patriarch of the Tamashiro Family, who are rivals with Nakahara's Ryudo family. He was working with the Tojo Clan to ensure the Okinawa resort deal goes through before Daigo called it off, and was beaten by Kiryu to get Saki back from him. 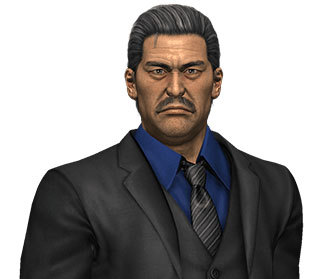 "When your chairman tells you to do something, you damn well do it. And the CIA is my "chairman." They say I need to kill someone, no matter the target... I'm going to kill them."

A man who carries an uncanny resemblance to the late Shintaro Kazama. He's later revealed to be an agent of the CIA who seeks to ensure the Okinawa resort deal goes through by any means necessary. He is the younger brother of Shintaro Kazama. 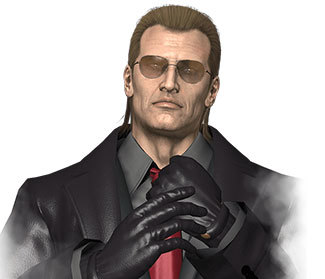 A mysterious individual who's only known motive is that he wants Kiryu dead. Is in fact the leader of a terrorist group known as Black Monday, and has conspired with Mine to bring about the events of the third game. 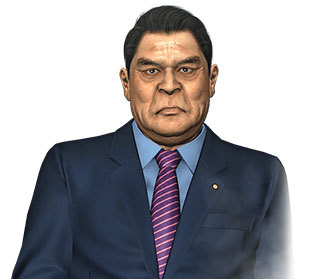 The Defense Minister, Ryuzo appears in the third game as one of the two politicians vying for the Prime Minister job. His big plan for winning the position revolves around a new missile defense system for Japan, built in co-operation with the Americans. 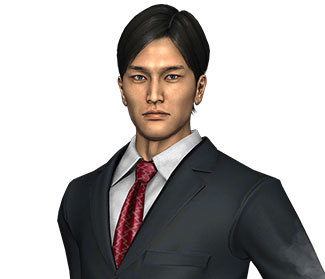 The defence minister's apprentice and assistant. He wishes the best for Okinawa, which is why he agrees with the base expansion bill. Upon learning it was a ruse, he defects to Suzuki (Tamiya's possible rival in the future election) to get the bill to pass.

Shoji Yonashiro
An Okinawan kobudō master who is asked by his student and local weapons smith Renta Kamiyama to help Kiryu learn to use more weapons so Kamiyama can sell more weapons to him. A little eccentric but his skills and training are the real deal.

He becomes an opponent in the Underground Coliseum once his training is completed. He continues to do so in 4 as a Cameo with no lines of dialogue.

In 5, he's joined the Victory Road as a competitor for Shinada in Kiniecho. 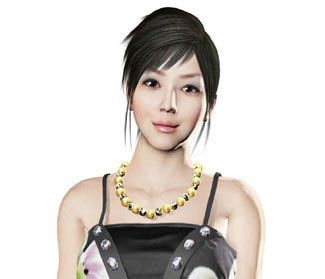 Mama as she appears in Yakuza 5.

The proprietress of New Serena, and the widow of a police officer killed in the line of duty who worked under Date's jurisdiction. Date felt responsible and looked over her following her husband's death, but became quite smitten with her. She's largely absent in the fourth game as she attends to her family, with Date taking her place, but she returns in the fifth.

A local male crossdresser introduced in Yakuza 3. He frequently chases Kazuma Kiryu around Kamurocho lovingly for just his beauty.