These are the characters that debuted in Yakuza 6, the seventh main entry of the Yakuza series and the final chapter of Kazuma Kiryu's story. Due to wiki policy, this page contains numerous unmarked spoilers.

For Kazuma Kiryu, Haruka Sawamura and Goro Majima, see their entries on the Character Index page.

When a majority of the Tojo Clan's original ruling families met their demise thanks to Kurosawa's antics, Sugai and Someya quickly made moves to take over by accusing the remaining family members of guilt for the Little Asia Arson. With everyone from Daigo to Majima effectively out of the way, they moved in to take over the Clan, serving as its sole rulers. Ultimately, their deaths result in Daigo retaking his position with Saejima and Majima as his two reigning families. 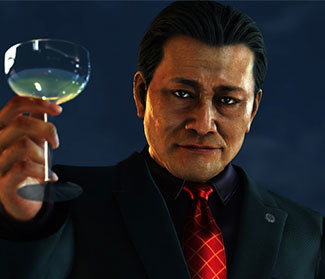 A man who heads the Tojo Clan’s Sugai group. A veteran member of the Tojo Clan relegated to a mere advisory role for years before ascending to acting chairman. His rise to power was made possible by the arrest of key Tojo figures like Daigo Dojima, Goro Majima & Taiga Saejima. He has slowly brought the whole clan under his control in order to wage war against a chinese mafia named the Saio Triad. He is a cunning man who was seemingly involved with the big fire in the Asia District. Since then he has arranged for Daigo's arrest which led him to become the Interim chairman of the Tojo while Daigo remains in prison. 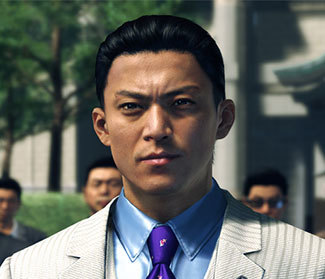 Head of the newly-minted Someya Family serving as Sugai's left hand man. A confidant of Sugai, the acting 6th chairman of the Tojo Clan. He used the conflict between the Tojo Clan and the Saio Triad to his advantage and rose to be a direct patriarch despite only being in his thirties.

The Hirose Clan is the local yakuza in the town of Onomichi Jingaicho. Although loosely affiliated with the Yomei Alliance as a subsidiary of the Masuzoe family, they are a very small clan and actually rather humble. Initially an obstruction to Kiryu's investigation behind Haruto's parentage, they become important allies and integral to his search for answers behind Haruka's accident. 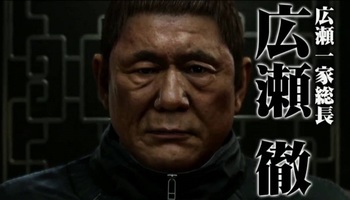 Head of the Hirose Clan. A seemingly jovial senior, but nonetheless manages to maintain a presence in Jingaicho. 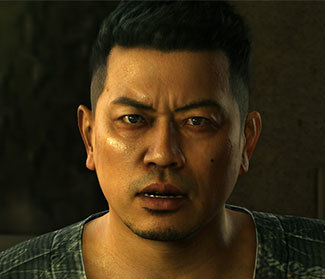 The first member of the Hirose Clan Kiryu meets when arriving in Onomichi Jingaicho, as well as it's underboss. He's very short-tempered and instantly takes a dislikes for Kiryu, but Kiryu eventually earns his respect and loyalty after he saves him. 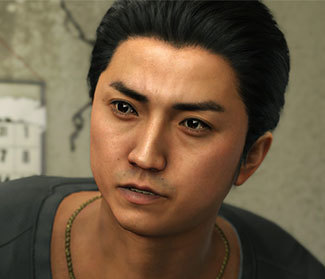 Another younger member of the Hirose Clan of Jingaicho. Yuta wishes to find the answers behind Haruka's accident with an unusual conviction. 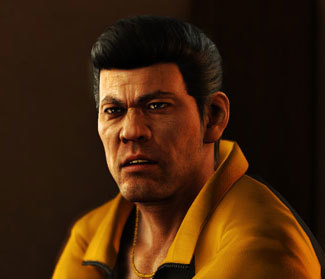 A low-ranking member of the Hirose Clan. Despite his stern appearance, Matsunaga goes through life with an easygoing disposition. 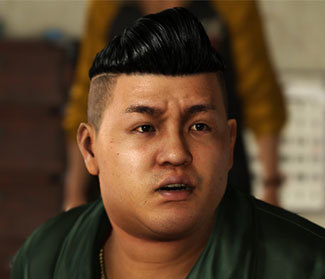 A low-ranking member of the Hirose Clan. Like most of the clan, Naoto spends most of his days relaxing in Onomichi.

A bar that Kiryu finds himself in during his time in Onomichi where he gets to learn about the many regulars that frequent the place.
Gen
Mama

A mysterious syndicate of multiple Yakuza clans. They're said to be so powerful that not even the Tojo Clan or the Omi Alliance can touch them, and Haruka's "accident" seems to further and further implicate their involvement. They're based in the town of Onomichi Jingaicho, Hiroshima.
Takeru Kurusu/Heizo Iwami 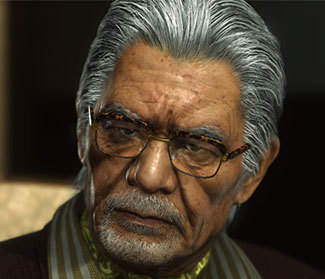 President of the Iwami Group, based in Onomichi, Hiroshima. Secretly he is also Takeru Kurusu, Chairman of the Yomei Alliance. Despite his advanced age, Heizo is a brilliant man who's presence is still felt with great authority. 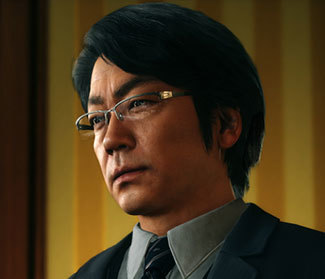 Son of Heizo Iwami and CEO of the Iwami Group's Shipbuilding company subsidiary. Despite his father being the president, Heizo has technically relinquished control of the company to Tsuneo. 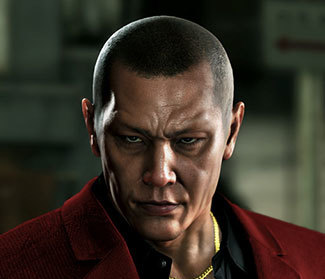 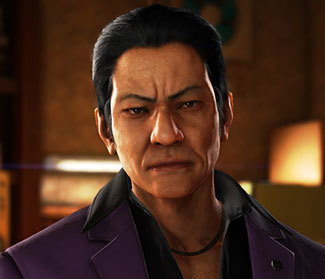 Boss of the Yomei Alliance-affiliated Masuzoe clan. He keeps a predatory eye on the Hirose clan due to their lax attitude on bringing cash. It won't be long until tensions burst.

After the fire of Kamurocho's Little Asia, the Chinese Mafia made a move on the city by rapidly building a Chinatown where the destruction took place. However, they are incredibly hostile towards the yakuza, and are willing to attack anyone who even appears to be one. They are also responsible for the construction of the battleship in Onomichi, which was used as their bartering piece after the devastating Tojo/Omi purge to gain their own piece of Kamurocho. 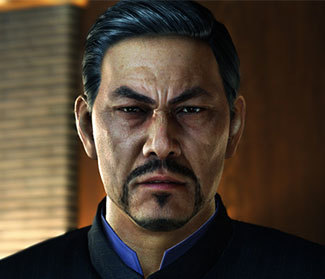 Leader of the Saio Triad. He made his move after the fire of Little Asia, marking his territory and expanding his influence. 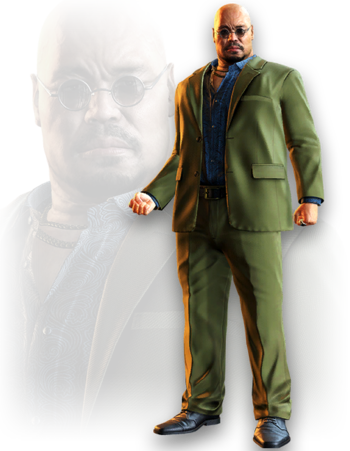 One of the Saio Triad's top henchmen. He is especially eager to kill any yakuza who stand in the way.
Shu Tatsukawa

An ex-member of the Hirose clan who left to work with the Chinese Mafia, and thought to be the the father of Haruto.

The deceased son of Big Lo. He was killed some time ago before the release of Kiryu from prison, when the game starts.

One of the other factions to make a move on Kamurocho during Kiryu's absence. The Jingweon especially have a grudge against Kiryu due to being nearly driven to extinction by his hand. The Jingweon's focus is in Kamurocho's sex industry, starting with the old club Stardust.
Joon-Gi Han 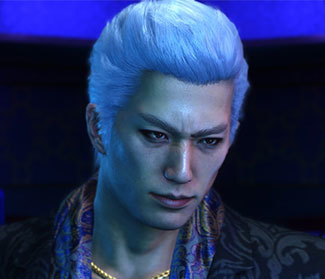 The new owner of Stardust and the current head of the Jingweon Mafia. A stylish man who uses his charm with women to rapidly expand the influence of his group.

A gang from Kamurucho founded by Jojima and Kazuchika Okada to take out the other colored gangs in the district, but soon became another run-of-the-mill gang, causing Jojima to leave and Okada taking his place as leader. Kiryu is approached by Jojima to help reform the group by defeating Okada and the rest of the "Six Lunatics", all of whom are New Japan Pro-Wrestling stars portraying fictionalized versions of themselves. When each of these bosses are defeated, they join Kiryu's gang and can be used for clan battles. The Kiwami remake of Yakuza 2 also features them as optional boss fights in Purgatory.
Kazuchika Okada 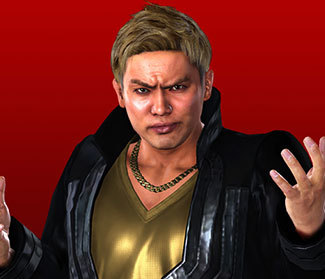 The leader of JUSTIS, nicknamed the Rainmaker. 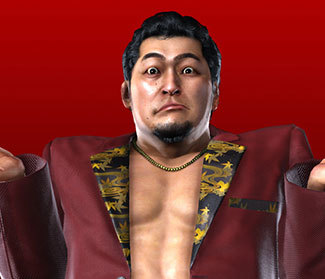 The first of the Six Lunatics fought by Kiryu, who has a habit of taunting people with his name. 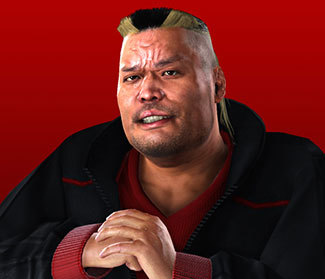 An aged brawler, and good friend of Satoshi Kojima. Kiryu fights both of them at the same time. 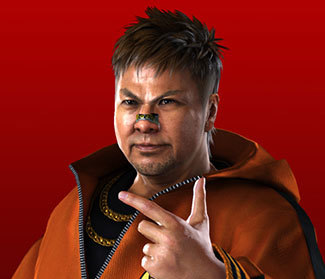 A senior member of JUSTIS, and a close friend to Hiroyoshi Tenzan. Kiryu fights both of them together. 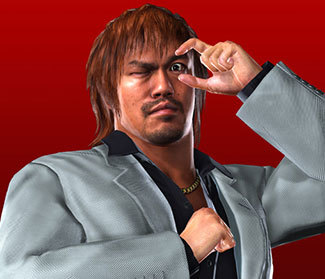 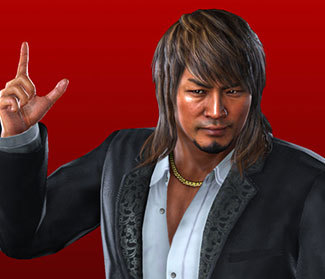 The resident Ace of JUSTIS.

A professional wrestler who also works as a hostess. Saki is a tomboy who is strong in both her body and her spirit.

A kind-hearted hostess who is quick to try and please her client, often putting the interests of her customers before the club, or herself.

A friendly and cheerful hostess who, unfortunately, is accused of trying to use her looks and personality to seduce men who are already in a relationship.

A kind and demure hostess. Unlike others in her line of work, Hikaru is very quiet and soft-spoken.

A Taiwanese hostess who is head-over-heels for Japanese culture. In her off-time, she enjoys anime, manga, and cosplay. 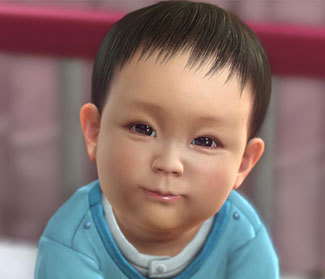 Surprise! The secret infant son of Haruka, conceived during the 4-year prison sentence Kiryu served. After Haruka is left comatose protecting him from what was most likely a hit, Kiryu takes it upon himself to protect and take care of Haruto, while also trying to discover the father of Haruto as well as the motives behind Haruka's accident. 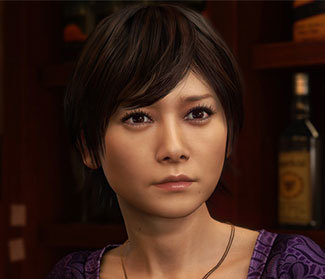 The owner of the local bar in Onomichi. She has the eyes of a number of men, but her involvement in the mystery behind Haruto's conception and the events around it are more than it seems. 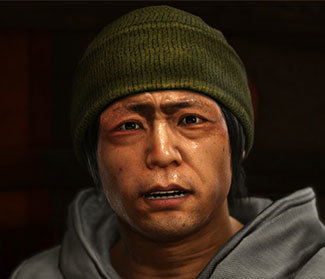 Owner of the local inn, which Kiryu stays in during his foray into Hiroshima.

A former IJA admiral turned politician. He was the one responsible for the secret construction of the Yamato Mark II battleship in Onomichi, built on the illicit funds of the Omi Alliance who controlled Hiroshima's shipyards. After Kurusu, the chairman in charge died, he uses his influence from this to help prop up the Yomei Alliance and ensure their secrecy in exchange money and power. He appears near the end of the game, advising Tsuneo to turn on his father and become the new Chairman of the Yomei Alliance.