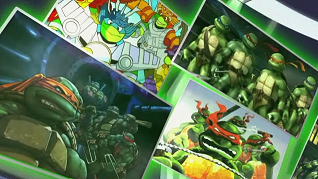 "BEHOLD! A multiverse of accursed Teenage Mutant Ninja Turtles!"
"Man, I LOVE being a Turtle!!!"
Advertisement:

(Ninja Turtles cereal, Chef Boyardee TMNT pasta, Ninja Turtles cookies, etc.); a Coming Out of Their Shells concert tour that first premiered at the Radio City Music Hall (with Donatello on keyboards, Leonardo on bass guitar, Raphael on drums and sax, and Michelangelo on guitar, as the story had a feel similar to Bill and Ted's Excellent Adventure, with its theme of the power of rock n' roll literally defeating the enemy, in the form of the Shredder (who only rapped about how he hates music) trying to eliminate all music; a behind-the-scenes documentary from 1991 called "Behind the Shells" about the making of the first two live action movies; and a stage show at the Disney-MGM studios theme park in Orlando, Florida from 1990 to 1996. The franchise is also the subject of a documentary film titled Turtle Power, fan-made but distributed by Paramount.

TMNT remains a pop-culture phenomenon to this day. It inspired the entire Teenage Mutant Samurai Wombats genre, and is a multimedia Cash Cow Franchise still beloved by many fans new and old.

Example of:
Gretzky Has the Ball