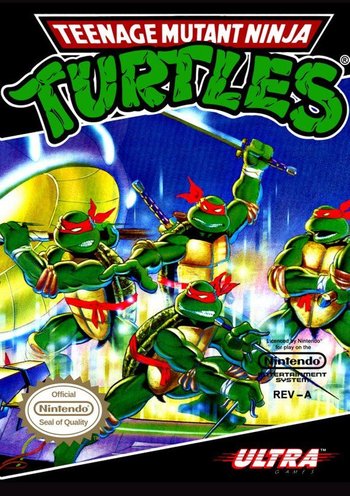 Best enjoyed with pizza, of course. Or Aspirin.
"Anyone unfortunate enough to have a Nintendo device in the house will be familiar with the Teenage Mutant Ninja Turtles, who star in one of the most insidiously addictive Nintendo games. The turtles live in the subways beneath Manhattan, where, exposed to radiation, they have grown into teenager-sized, intelligent creatures, and have absorbed such items from the culture as surfer jargon."
— Roger Ebert
Advertisement:

A side-scrolling platform game released in 1989 (1990 for the PAL region) for the Nintendo Entertainment System and 1991 for computers. As you could tell by the title, it was a video game adaptation of Teenage Mutant Ninja Turtles which had become a cash cow franchise towards the end of The '80s thanks to the hit cartoon. Although it is often thought to be based on the comic created by Kevin Eastman and Peter Laird, nearly everything about it - Splinter being Hamato Yoshi, the Technodrome, The Shredder being alive and having a retromutagen gun, the existence of Bebop and Rocksteady, and April O'Neil as a reporter using her cartoon design, all came from the cartoon, though the box art and some of the in-game art style came from the comics. Perhaps due to brand recognition, this game was one of the best selling NES titles published by a third-party company. It also has the distinction of being the fifth game reviewed by James Rolfe's "The Angry Video Game Nerd" character, then known as the Angry Nintendo Nerd.

The four eponymous characters—brothers Leonardo, Michelangelo, Donatello, and Raphael—are in hot pursuit of the Foot Clan, the most dangerous criminal empire New York has ever seen. Their babe-licious human friend, Channel 6 News field reporter April O'Neil, had just been kidnapped by the Shredder, the deadly leader of the Foot. To give you an idea of how deadly he is, the instruction manual describes him as "a villain more vicious than an army of mind altered Bruce Lees." That's deadly. His plan? Brainwash April and train her in ninjitsu so she will become part of the Foot! The Turtles must save April, storm the Shredder's Technodrome lair, and steal his Life Transformer Gun, which can turn their beloved Master Splinter back to his original human form of Hamato Yoshi.

There are six levels total, and gameplay is divided into two modes: initially, you start the level in a top-down perspective hub world, and you walk your way to a platforming segment. Progression to the next level is gained by beating each platforming segment.

Although only a single player game, you can switch between the Turtles on the fly at the pause screen. Each turtle is essentially a life, meaning you have four lives. When the vitality gauge of a Turtle is completely depleted, he is "captured." When all four are captured, it's Game Over, and you are only given a chance to continue twice. It can get very painful when you are down to only Raph and Mikey, as Donatello's bo staff has the longest range and strongest attack power, Leonardo's katana has middling range and attack power, Raph's sai has the worst range and strong attack power, and Mikey's nunchaku have short range and the weakest attack power. This means that if you're down to Raph and Mike, you're likely going to be taking a lot of damage since you have to be right up on the enemies in order to hit them, and most don't die in one hit. Still, you are given a few chances to rescue captured Turtles.

Released a little later in '89 was the arcade game, which was nowhere near as polarizing and is almost unanimously considered a classic in the Beat 'em Up genre. Thanks to the arcade game's success, most games based on the Ninja Turtles henceforth would be beat em ups as well, although some, such as a couple of the Game Boy titles, would be platformers like this puppy.

by ProtonJon, of Kaizo Mario World LPing fame, in honor of the game's then-recent re-release on Virtual Console (speaking of the VC release, it's 600 Wii points, instead of the usual 500 for an NES game, due to licensing issues; and said licensing expired, causing the game to be de-listed, although previous buyers can still re-download it).

See Teenage Mutant Ninja Turtles for information on the franchise in general and similarly named works.