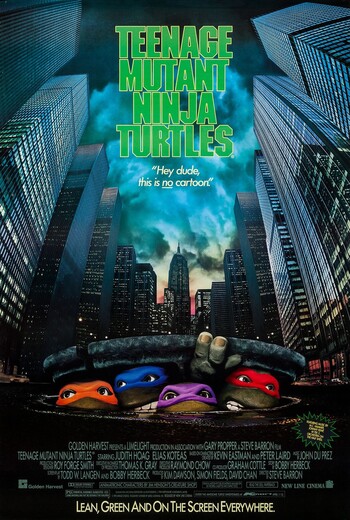 Hey, dude, this is NO cartoon!
"Dudes and dudettes, major league butt-kicking is back in town!"
— Michelangelo
Advertisement:

Teenage Mutant Ninja Turtles is the 1990 feature adaptation of everyone's favorite heroes in a half-shell. It was directed by Steve Barron, with the screenplay by Todd W. Langen and Bobby Herbeck and the story by Herbeck. It was released on March 30th, 1990.

The Shredder (James Saito, with voice dubbed by David McCharen) is building an army. With his Foot Clan, a group of misguided teenagers trained in the art of ninjitsu, he is responsible for a crime wave the likes of which New York City has never seen. The worst thing is that they're ninjas. How do you catch someone so quick? So silent?

Enter four reptilian hominids: Leonardo (David Forman, with voice dubbed by Brian Tochi), Donatello (Leif Tilden, with voice dubbed by Corey Feldman), Michelangelo (Michelin Sisti, with voice dubbed by Robbie Rist), and Raphael (Josh Pais), given a humanoid shape through a dip in a broken canister full of mutagen. Trained by a similarly mutated rat named Splinter (Kevin Clash) in the art of ninjitsu as well, along with moral support in investigative reporter April O'Neil (Judith Hoag) and extra muscle in street vigilante Casey Jones (Elias Koteas), these Ninja Turtles must save the Big Apple from the clutches of the Foot.

Financially the most successful of the movies made thus far, the first was mostly an adaptation of Eastman and Laird's original comic, although it did take some elements from the popular '80s cartoon, such as the turtles' love of pizza and their differently colored headbands, and April's job as an investigative reporter. The costumes provided for the eponymous heroes, as well as puppetry for Splinter and the turtles as young mutants, were provided by Jim Henson.

The film was followed up by two sequels and an animated continuation in 2007. A completely different movie was released in 2014, which also received its own sequel in 2016.

Actually, it's more like an Atomic D-Bomb, but considering how frustrated Raphael sounds when Casey Jones bests him in their initial scuffle, and the fact that we only hear Raph's voice echoing over a wide shot of the city, it sure fits the trope.

Actually, it's more like an Atomic D-Bomb, but considering how frustrated Raphael sounds when Casey Jones bests him in their initial scuffle, and the fact that we only hear Raph's voice echoing over a wide shot of the city, it sure fits the trope.