A prisoner who has chosen to take her chances in the Gungeon rather than face life imprisonment. Her starting weapons are the Budget Revolver and the Sawed-off Shotgun. Her active item is a Molotov Cocktail and her passive item is a photo of her nemesis that gives her a damage buff whenever she takes damage.

In her past life, she was once the legendary crime boss "Laser Lily" who had worked with the crooked politician Black Stache. Her partner-in-crime eventually sold her out to the Hegemony, thus leading to her imprisonment.

A mysterious gunslinger who braves the Gungeon alongside her dog, Junior II. Her starting weapons are the Rusty Sidearm and the Crossbow. Her dog can occasionally dig up consumable items such as health and ammo.

In her past life, she was a treasure hunter of sorts from about 1000 years ago who was caught in an inescapable trap by her nemesis Dr. Wolfenclaw, who put her in cryogenic stasis.

A smuggler who comes equipped with the Rogue Special, a laser pistol. He can try to unlock chests without a key with his Lockpick, talk the shopkeeper into giving him discounts, and has a higher ammo capacity.

In his past life, he and his friend were cornered by a Hegemony battlecruiser. At the urging of his friend, he left him to his fate.

A low-ranking Primerdyne Marine, he comes equipped with the Marine's Sidearm. He can call for ammo with his Supply Drop, starts with a piece of armor and his military training means he's more accurate and reload faster than other characters.

In his past life, Primerdyne summoned an Eldritch Abomination that proceeded to wreak havoc within the facility. Rather than facing it down with his squad, he ran for the escape pods.

The Co-op only character. His starting weapon is a Dart Gun. He carries a Friendship Cookie that lets him revive fallen comrades as well as the No. 2 Headband that makes him stronger when he's alone.

One of the unlockable secret characters, it is unlocked by bringing the Busted Television to the Blacksmith, who will repair it. It uses an Arm Cannon as its default weapon. It can spray a pool of coolant forward as well as electrify any water near its bullets.

In its past life, it was hailed as the finest warrior of the robotic regime hell-bent on eliminating all humans off their planet, but presumably failed to kill The Last Human.

The other unlockable secret character, a friendly sword-wielding Bullet-kin. Upon clearing a character's past, occasionally you'll find it wandering around the field before teleporting away. Repeat the process enough times and it will be unlocked. It starts off with Blasphemy, a sword that shoots Sword Beams when it's at full health. It is also immune to contact damage and deals increased damage from rolling into enemies.

In its past life, it wielded its sword against the evil king Cannon. Its failure doomed the Bullet-kin into servitude to the Gungeon.

Added in the 'A Farewell to Arms' update, this walking space time anomaly can be unlocked by finding a space texture on one of the floors, interacting with it, and beating a final boss after having done so. Due to its anomalous nature, it starts with a random starting gun, a random non-starting gun, and a random passive or active item. It is presumably some kind of sentient anomaly caused by everyone mucking with the timespace continuum via killing their past.

Since it is not really a person, this character lacks a past, instead going straight to Bullet Hell when trying to reach the final chest.

The legendary hero who first conquered the Gungeon and turned into the Lich. Brought back to a previous point in his life by the Paradox's temporal shenanigans, he's seeking to kill his future and prevent the Gungeon from ever existing to begin with.

Added in the 'A Farewell to Arms' update, the Gunslinger is unlocked via a pretty round-about method; you have to complete a run with Paradox and kill the Lich, and then you'll immediately be thrown into playing the Gunslinger. From there, you have to defeat the Lich again without dying in order to unlock him for normal play. Failing at any point will force you to do it all again.

He starts every run with the Slinger, a 7-shot revolver that, instead of having a normal reload, can be thrown at an enemy after fully emptying its magazine, and the Lich's Eye Bullets, a passive item that will simulate the synergies of every gun you pick up, with a few exceptions.

The simplest type of blob creature. They can only hurt you if they touch you.

A torture device that fires shots that home in on targets.

Skeletons made out of the shells of fired bullets.

Birds that fires eggs that are full of bullets.

Wizards who fire barrages of bullets at foes.

These might seem like your average mimics at first, but they could be anything, even the walls or pedestals...

Massive hammers which intend to crush anyone who comes underneath.

A pair of Bullet-Kin who fight as one. Their names are Smiley and Shades. 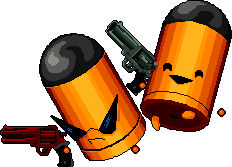 A regal Bullet-Kin who sits on a Lead Throne. 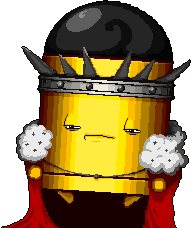 IN THE LEAD THRONE

A bird who has spent so long in the Gungeon it has lost it’s mind and now enjoys flexing and shooting intruders with a minigun. 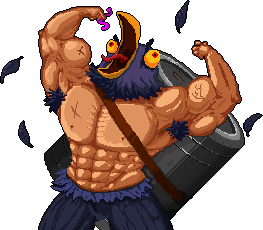 A being named Meduzi, who, as you might expect, can turn those she fights to stone. 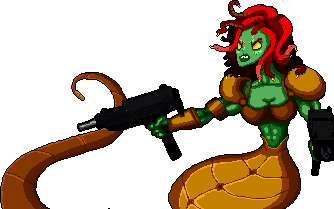 A snake comprised of several turrets that really likes eating turrets it spawns- and you, for that matter. 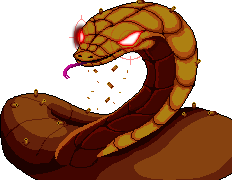 A one-eyed monster with six guns. 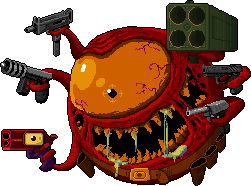 A Tanker operating a tank that the Hegemony left behind when they tried to invade the Gungeon and failed. 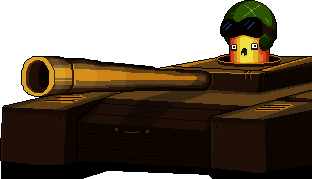 A monster made out of gunpowder that defends the Black Powder Mine with its life. 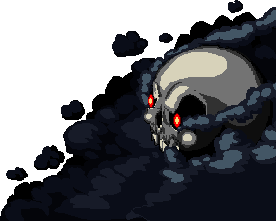 GUNS IN THE DEEP

Introduced in the Supply Drop update, this being is the leader of the Killithids. 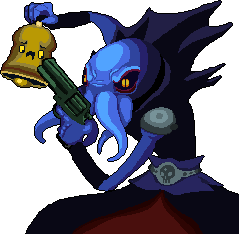 Four possessed pillars who fight you all at once. The last becomes possessed by Kaliber when its comrades die. 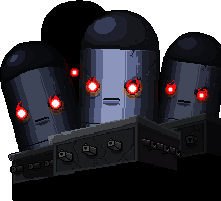 A massive mobile wall that intends on crushing those it faces. 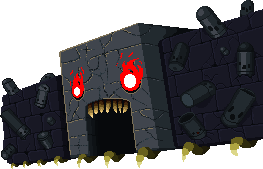 A normal warlock, or so it seems... because his head is a gun. 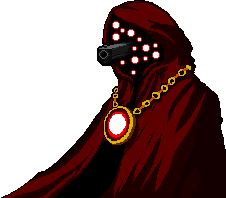 FIRST OF THE ORDER
Chamber 5

The final challenge to be faced before one can get the Gun That Can Kill The Past — a giant dragon made out of bullet shells. 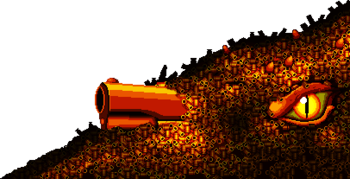 A Gungeoneer who betrayed Ser Manuel and left him to die. He now spends most of his time residing in the Black Powder Mine. 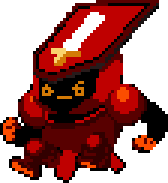 The lord of all Blobulons, this titanic pile of ooze resides at the heart of the Oubliette. 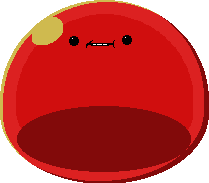 A demigod among Bullet-Kin. He hides deep within the Abbey of the True Gun.

If you thought normal mimics were bad, one that’s secretly the boss door is even worse!

Final Bosses From The Past

A being which was teleported into a laboratory. The Marine tried to face it but fled. Now he seeks to go back and kill it. 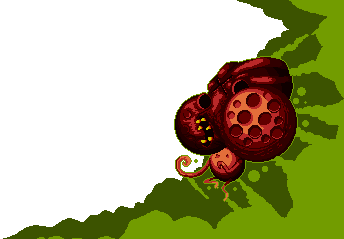 A politician who framed the Convict for a crime she didn’t commit. Now the Convict seems to go back to the past and get back at him. 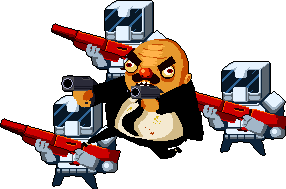 A massive Hegemony battleship which attacked the Pilot while he was in space, forcing him to flee. Now the Pilot seeks to go back and destroy the battleship. 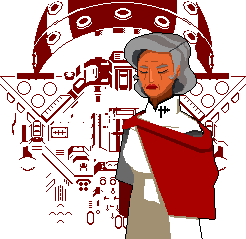 Dr. Wolf was a mad scientist who captured the Hunter when she tried to kill him. If the Hunter goes back to face him, he will call upon his personal creation to defeat her. 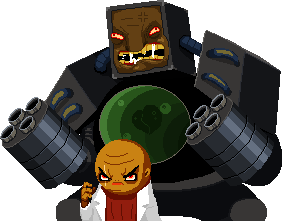 The last remaining human of wherever the Robot came from. The Robot failed to kill her and now it wants to go back and finish the job. 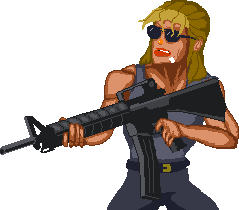 A wicked sorcerer, who, along with his king, took over the Gungeon and prevented anyone from getting through. Though the reign of his lord is over, the Bullet seeks to return to the past and end his evil schemes. 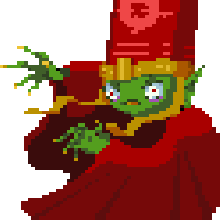 The mastermind behind Agunim’s takeover. He’s just as mean as his servant is. 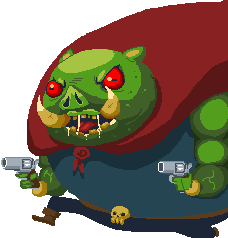 The true final boss, the ruler of the Gungeon. He will only show himself when the pasts of the main four characters have been killed. 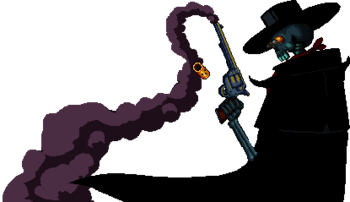 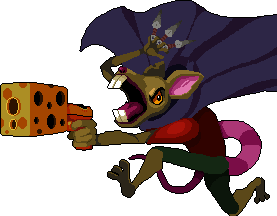 MASTER THIEF
A mysterious anthropomorphic rat who likes to steal valuable goods from Gungeoneers. He'll teleport to almost any item that gets left behind, and if you don't pick it up yourself, he'll take it away for good. If a shortcut is taken, he'll appear in a Bello disguise and offer up to three free weapons for you to take.

The Resourceful Rat is normally an unstoppable force; no matter how many times you scare him off, he'll eventually reappear and steal the item anyways. However, if you have the dough to purchase a special key, you might find a way to take revenge against him...

A being who likes to drink and offers gossip on bosses once you’ve defeated them for the first time.

A spirit who inhabits the Halls of Knowledge.

The shopkeeper who has several stores throughout the Gungeon. He’s generally a nice guy- unless, of course, you shoot in his store...

A weirdo who offers to buy unwanted items.

A woman and her massive robot. Once you free them, they’ll set up shop in the Forge.

A mysterious tinker who can set up shortcuts to the later floors.

A hunter and his friend who offer quests for new guns by killing the various monsters of he Gungeon.

A man who runs a shooting gallery in the Gungeon.

A king and his put-upon servant. They like challenging you to clear rooms under certain conditions.

A Bullet-Kin who suffers from eye problems. He’ll sell you items for blanks.

A talking lock who will sell items for keys.

A friendly orc who sells items in both times the Gungeon and the Breach.

An alien who sells goop based items in both the Gungeon and Breach.

A woman who will sell items- but you’ll be Cursed if you buy them, so beware!

A being who likes to map out the Gungeon.

Bello doesn’t dare to go as far as the Forge in the Gungeon- but this Blacksmith is nice enough to replace him.

A sorceress who will enchant you for a cost.

A pair of healers who will heal you.

A little dung beetle who will sell items depending on how far you get in the Gungeon.

A living twenty sided die who will make the game harder for a price.

A smooth talking dog who will make the game faster.

A shopkeeper who will sell synergy chests.

A being who will enable Rainbow Runs.