To return to the Equestrian Pantheon's page, click here.

To return to the main character index, click here. 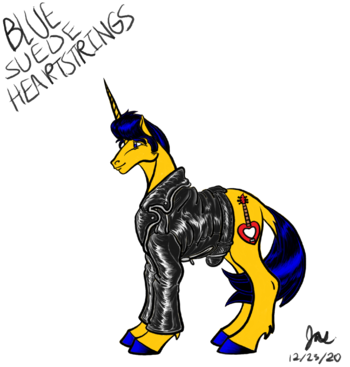 Advertisement:
"Whatever I will become will be what the higher powers has chosen for me." (as Blue Suede Heartstrings)

), is the joint-Church/Equestrian Alicorn god of Music, Humility, Performance, and Love, and an extremely famous and beloved celebrity icon whose reputation survived the Ages of Known History.

Blue Suede was born to mortal parents in southern Ponyland during the Second Age. His foalhood was marred by tragedy and hardship - he lost his older identical twin brother, Bossa Nova, to stillbirth (though Blue Suede would end up meeting him much later), and he narrowly survived an outbreak of Category 5 tornadoes that devastated his hometown. Despite this, Blue Suede grew up influenced by religion, which influenced his humility and inclination for music. His talents would be made known much later, when he revolutionized the 'Rock and Roll' and introduced it to the mainstream, creating one of the most recognizable celebrity icons of the Second Age.

Unfortunately, much of Blue Suede's career was tarnished by the decisions of his corrupt manager, "Colonel" Hollow Note, who not only psychologically abused him, but worked him like a dog. Despite attempts to help by a then-pre-Ascendant Bossa Nova, this would continue until Blue Suede snapped from the mistreatment, causing him to furiously beat up his manager during an explosive argument. Traumatized, bitter, and disillusioned, Blue Suede intended to permanently retire from music and become a recluse, but ultimately changed his mind thanks to the efforts of his loved ones and Luminiferous, a friendly "devil in disguise". After holding a 'farewell' concert, Blue Suede became a globe-trotter and performed music for his fans on his own terms. His adventures, combined with Luminiferous' tutelage, would help him Ascend to godhood as an Alicorn.

However, while Blue Suede made many friends and did lots of good deeds throughout the Ages, life would wear down on him via loss and more abuse. His traumas, combined with his friends and family's ignorance, caused his mental state to deteriorate over time until he finally snapped. Blue Suede was narrowly saved from turning into a Fallen Alicorn, but he fell into a coma right after, requiring a group of friends to psychically enter his mind in order to wake him up. As it turned out, 'The Colonel' had taken root in Blue Suede's mind, embodying all his worst traits and memories, and would have succeeded in overtaking its host. Thanks to the encouragement of his friends, Blue Suede regained his pride and let go of the pain his abusers caused him, allowing him to kill 'The Colonel' for good.

Now finally free, Blue Suede was able to heal from his traumas. His road to recovery ended with him being crowned as Prince Caerulus Melodia Equestria and joining the Equestrian Pantheon, after which he would fall in love and marry his long-time friend, Prince Stoltur Skjöldur, the Bogolenya Deer-Draconequus god of Pride and Evil. He also became the father of Prince Perfect Tone, an infant Alicorn-Deer Draconequus, whom he is raising together with Stoltur. Last but not least, he finally changed his mind and joined the Church of the Stars after initially refusing to out of humility, much to the joy of his friends and students who are members of it.

Personality-wise, even before Ascending, Caerulus is known for being very tolerant, kind-hearted, and friendly. Due to being a devotee of the 'King in Heaven', he is very humble, and he is a good teacher to hundreds of students, many of whom Ascended to godhood thanks to his lessons. Caerulus' personality is what made him famous as a musician, and allowed his reputation to endure over three Ages. However, three Ages worth of abuse, personal abstinence from feeling pride, and other bad experiences caused him to become mentally unstable, making him repress the 'bad' parts of himself until he finally snapped. Fortunately for Caerulus, the vast number of friends he made, among them Prince Stoltur, would help him recover and accept the beneficial aspects of pride, which are important to a balanced and healthy well-being. With his coronation, Caerulus sees his new status as a Prince and member of the Equestrian Pantheon as a 'promise' to be a better stallion, and a 'responsibility' to uphold his promise to himself, his peers, and his subjects.

That being said, Caerulus is not to be messed with. While he still has his kindness, tolerance, and mercy, his experiences influenced him to be far more open with his anger, and far more willing to punish people of serious wrongdoing. Targets of his ire include abusers, racial bigots, and excessively prideful beings, who have been on the receiving end of some very nasty curses. He is also quite protective of those close to him, especially his husband and son, who both played a role in helping Caerulus build his self-esteem. Going after them is ill-advised.

As a 'prodigy deity', Caerulus is incredibly powerful, and learning under various deities made him even more so. As a god of Music, he can use both musical and sound magic. As a god of Humility, he has psychic powers that help him detect, predict, and encourage/discourage humility, as well as purification spells that cure people of pride-based curses. Ironically, his domain of Humility also gives him various humiliating curses and hexes. As a god of Performance, he is a skilled dancer and shapeshifter, with unique abilities like magically sensing the quality of performance arts, and magically generating props for performers to use. As a god of Philia Love, his empathy is enhanced, and he can see the bonds of friendship that tie people together, allowing him to repair or sever these bonds. Fittingly, he can empower himself and others through friendship, and punish those who abuse their friends and/or break their friendships for cruel, petty reasons with various curses.

Outside of his domains, Caerulus is a very talented and experienced musician who revolutionized the 'Rock and Roll' genre, and an experienced fighter due to being a war veteran from the "Second Maretian-Tellusian War". Notably, his combat skills are enhanced by his Performance domain. He is also capable of using his instrument, a heart-shaped magitech guitar, as a blunt-force weapon. Finally, Caerulus is psychically linked to his older twin brother, Bossa Nova, now Prince Rubeus Stella, allowing them to telepathically communicate and sense each other's emotions.

A kindhearted yet long-suffering god, Caerulus was ultimately able to persevere thanks to his friends and loved ones' support, and continued inspiring others well into the Fourth Age.
open/close all folders
# - B
C - E
Advertisement:
F - I
J - O
P - S
T - Z