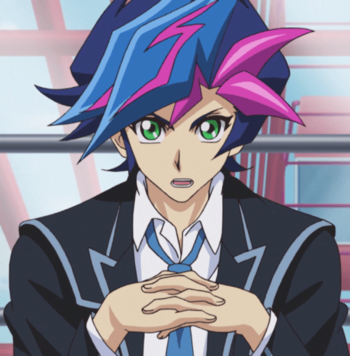 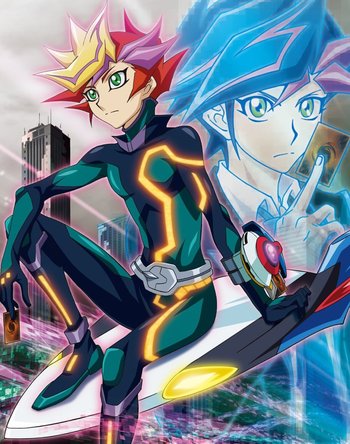 A first-year high school student who doesn't like standing out and doesn't enjoy Dueling. In LINK VRAINS, he is known as Playmaker, one of the best duelists in VRAINS. He has a personal grudge against the hacker group, the Knights of Hanoi, and wishes to take them down. To this end, he captures Ignis, a mysterious AI program sought by both Hanoi and SOL Technologies. With the two knowing Playmaker has Ignis, Yusaku becomes their target to find and defeat. At the end of the series after Playmaker defeated Ai he went on a journey for 3 months leaving his comrades behind .

Yusaku uses a Cyberse deck of low-level monsters, centered around a Beatdown play style, that swarm the field to set up Link Summon combos. His ace monsters are Firewall Dragon and Cyberse Magician. He also utilizes Code Talkers such as Decode Talker in order to use their effects to adapt to the situation at hand or use them as attackers by empowering them with card effects. In Season 2 he uses Ritual, Fusion, Synchro, and Xyz Monsters in order to have an alternative way of summoning strong Monsters while at the same time still supporting his Link Monsters.

In Speed Duels his strategy is to let his opponent to damage him or use his own cards with effects that requires him to pay LP in order to drop his LP to 1000 or below it so that he can use his Skill "Storm Access" which allows him to add a Cyberse-Type Link Monster to his Extra Deck which he uses finish of his opponent. Midway in Season 2 during his third duel against Bohman, his Skill was upgraded to "'Neo' Storm Access" which is mostly the same as regular Storm Access, but also allows him to add other types of Extra Deck Cyberse-Type Monsters to his Extra Deck besides Link Monsters. Additionally if Yusaku's LP are 100 or less and he failed to acquire a card in the first attempt, he can try once more to add a Extra Deck Cyberse-Type Monster to his Extra Deck and draw one card afterwards. 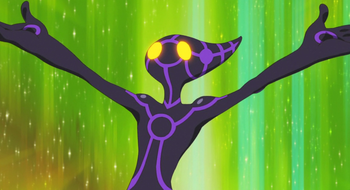 A mysterious AI program, sought after by the Knights of Hanoi and SOL Technologies Inc., that Yusaku captures. Belongs to an AI species with free will, known as the Ignis, and is based on the DARK Attribute.

Warning major spoilers underneath here. All unmarked! Read at your own risk. You Have Been Warned.

Tropes Exclusive to Ai in Season 3 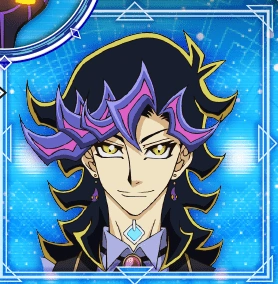 After the defeat of Bohman, Ai became the last remaining Ignis and disappeared from Yusaku along with Roboppy. After a few months he resurfaces with a human form and a mysterious goal in order for him to go forward.

In duels Ai uses an "@Ignister" deck which focuses on swarming his field with @Ignister monsters to quickly Link Summon Linguriboh and Dark Templar @Ignister from his Extra Deck and then use Synchro, Xyz, Fusion or Ritual Summon as another way of summoning strong monsters or use them as backup in case Dark Templar isn't enough. He also uses the "Ai" archetype of Spell & Trap cards themed around him to empower them. 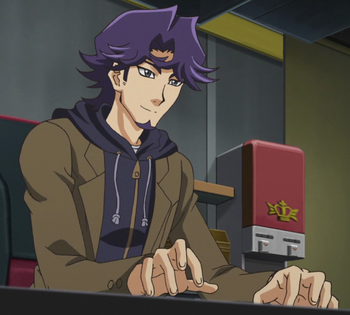 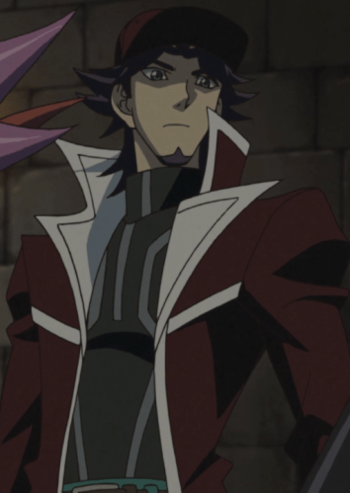 A seemingly ordinary man acquainted with Yusaku who runs a hotdog stand, he is in truth a skilled hacker who operates as Playmaker's Mission Control. He has a little brother, Jin Kusanagi, who remains traumatised thanks to a certain ten-year old incident. At the end of the series after Ai is defeated Kusanagi continues to work at his hot dog truck with his brother Jin and Aoi frequently visits them to inquire about Yusaku's whereabouts and all of them are hoping that Yusaku would return someday.

He uses a "Codebreaker" deck, an archetype of DARK Warrior-Type Monsters. 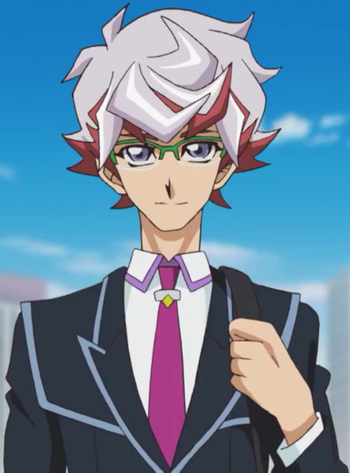 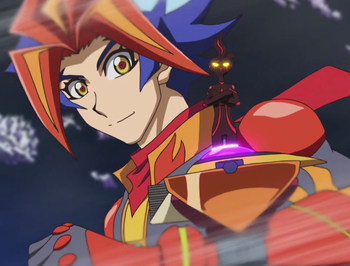 A New Transfer Student of Den Academy. In LINK VRAINS, he is known as Soulburner. Just like Yusaku he is a victim of the Lost Incident/Hanoi Project and caused his time to stand still. After the incident he became a Hikikomori, but after seeing the three heroes of LINK VRAINS (Playmaker, GO and Blue Angel) fight against the people who caused his problems and meeting his Ignis Flame, he decides to go forward and help Playmaker in his fight against the new enemy faction. At the end of the series after Ai is terminated Takeru returns to his hometown and continues to explore LINK VRAINS withs his friend Kiku.

Takeru uses a Salamangreat deck, an archetype of FIRE Cyberse-Type Monsters focused on a Beatdown strategy, but unlike Yusaku whose deck focuses on Link Summoning multiple Link Monsters and using their effects together for power, his deck focuses more on summoning his ace monster Salamangreat Heatlio whose effects alone are enough to defeat his opponents. His deck also utilizes Reincarnation Link Summon this allows him to use Link Monsters as the only material in order to summon a copy of the same monster, but with an effect it couldn't use before. His deck just like Playmaker's is capable of using Ritual, Fusion and Xyz Summon which he uses as an alternative when his Link Monsters aren't enough. 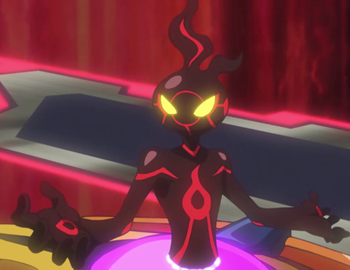 One of the six Ignis created by Dr. Kogami, and Takeru's partner; is based on the FIRE Attribute. He shows himself to Ai and Yusaku after his homeworld, the Cyberse World, was destroyed by a certain unnamed faction. His goal is to find the other Ignis in order to rebuild the Cyberse World and to defeat the enemy faction that caused its destruction. At the end of Season 2 Flame and the other Ignis except Ai got absorbed by Bohman and after Bohman is defeated he and the other absorbed Ignis are terminated. 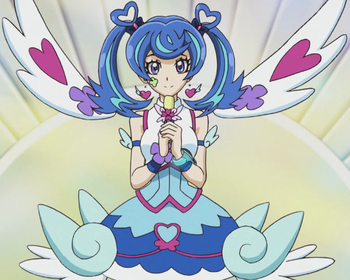 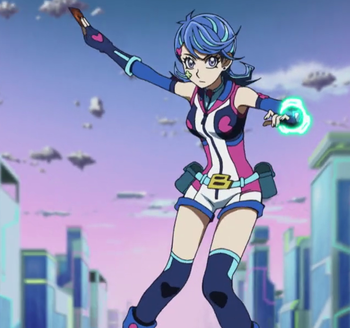 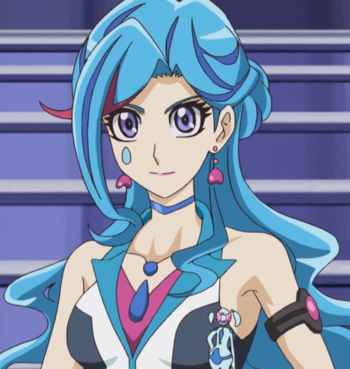 A classmate of Yusaku's. In LINK VRAINS, she is known as Blue Angel. In Season 2 she goes by the name Blue Girl in order to help her brother Akira in his search for the Ignis. However she changes her name once again to Blue Maiden after deciding to partner with the Water Ignis, Aqua and fight alongside Playmaker again in order to defeat Lightning and save her Aqua's Origin and Childhood Friend, Miyu. At the end of the series after Ai is defeated Aoi got her brother back and frequently visits Jin and Shoichi at Cafe Nagi to inquire about Yusaku's whereabouts and hoping that he would return from his journey someday.

As Blue Angel and Blue Girl, she uses the Trickstar archetype, focusing on whittling down her opponent's LP bit by bit via card effects. Her Ace Monster is Trickstar Holly Angel, a Monster that temporarily gains strength when her opponent takes effect damage. Her Skill, Trickstar Fraud, allows her to force an opponent to draw cards until they have three cards in their hand once per Duel, but as a price her opponent must banish cards from her hand equal to the amount of Trickstar Monsters in Blue Angel's GY.

In season 2 she adds Fusion Summoning to her deck in order to increase her burn strategy and give more offensive pressure. She also changed her Skill to Trickstar Gig. This Skill allows her to send cards from the top of her deck to the GY equal to the amount of Trickstar Monsters she has on her field. After that she can add one Trickstar card send to the GY to her hand.

As Blue Maiden, she uses a "Marincess" deck, an archetype of female WATER Cyberse Monsters. 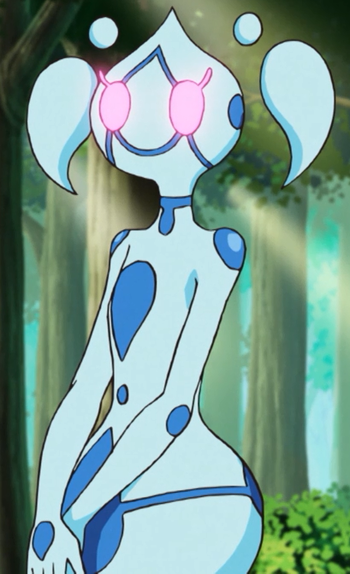 One of the six Ignis created by Kogami. Is based on the WATER attribute. Her Origin is Miyu, a childhood friend of Aoi. At the end of Season 2 Aqua and the other Ignis except Ai got absorbed by Bohman and after Bohman is defeated she and the other absorbed Ignis are terminated. 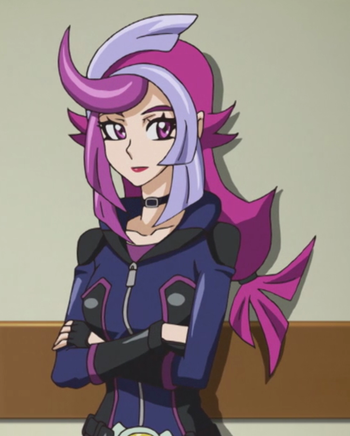 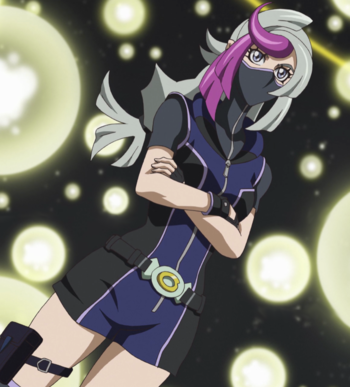 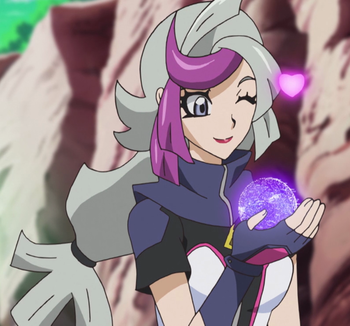 A young woman hired by Akira to spy on Playmaker. She is known as Ghost Girl in LINK VRAINS. At the end of the series after Ai is defeated Emma and the other victims were revived and she continues to work as a Cyberse Treasure Hunter with her brother Blood Shepherd.

She plays using the Altergeist archetype. Her deck focuses on swarming the field with Altergeist Monsters and set up many Trap cards from her deck with their effects. Her Skill, Secret Cure, allows her to excavate cards from her deck until a Monster Card is revealed. She can than add the Monster Card to her hand while the other cards are sent to the GY and both players gain LP equal to its ATK.