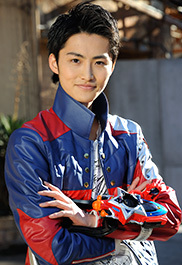 A traveling warrior who was born in the Leo System. He has an amazing amount of luck, which helps him both in life and in the battlefield.

Lucky's personal voyager is a Leo Star System Space Cruiser. It is able to utilize vertical takeoffs and landings and armed with the Leo Laser, Leo Claws and Leo Missiles. Given its mix of powerful arsenal and flight capabilities it is able to visit many planets and is the strongest of the Kyu Voyagers.
Stinger 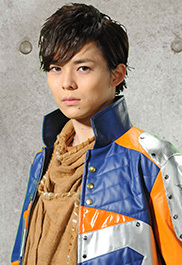 A mysterious veteran warrior from the Scorpius System who utilizes venomous techniques. Hails from a planet that fell to Jark Matter, betrayed by his own older brother. Works as a Rebellion spy within Jark Matter.

Stinger's personal Voyager, a Scorpius Star System multi-legged walker tank. With it's six powerful articulated legs it specializes at missions on harsh desert planets with magnetic or sand storms. It attacks with it's twin Scorpius Crushers (Scissors), can pierce enemies with the Scorpius Needle (Tail), and attack with it's own poison.
Garu 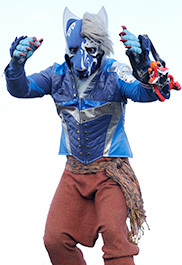 A bipedal wolf being from the Lupus System. He possesses incredible speed and strength, but is known to be impatient. He lost his pride after seeing his clan getting killed by Jark Matter.

Garu's personal Voyager, a Lupus Star System Cyborg Beast. Its notable characteristics are its Lupus Kiba (Fangs) and Lupus Feather (Down/Fur). Has the ability to sense atmospheric currents and atmospheric pressure and conduct searches using its body hair, and specializes in missions involving planets with tropical rain forests or lush jungles. Navigating easily around dense forests, it can rush and attack speedy enemies with its fangs.
Balance 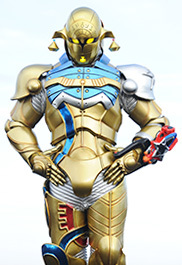 A mechanical lifeform from the Libra System. He has the ability to control other machines.

Balance's personal Voyager, a Libra Star System Humanoid Robot. Capable of analyzing the balance of atmospheres with the Libra Balancer within it's head which ensures that it keeps stability in battle, it specializes in missions on mechanized planets filled with powerful electromagnetic waves. The Libra Shields on both arms can be used as shields, as well as yo-yos and flying discs.
Champ 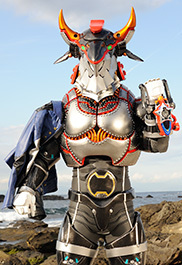 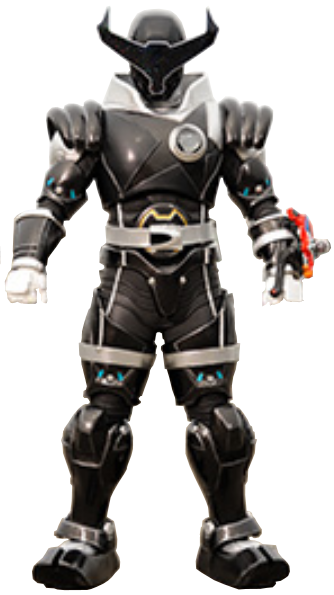 A robot designed for wrestling from the Taurus System that is loyal to his friends.

Champ's personal Voyager, a Taurus Star System Battle Tank. It's skilled at moving over unpaved roads using its hardy crawler treads, and can move through wastelands with ease. It specializes in missions on undeveloped planets. Armed with the Taurus Crawlers and the Taurus Horns it can rush straight at enemies with its large, fortified body.
Advertisement:
Naga Ray 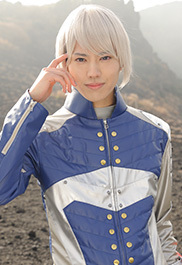 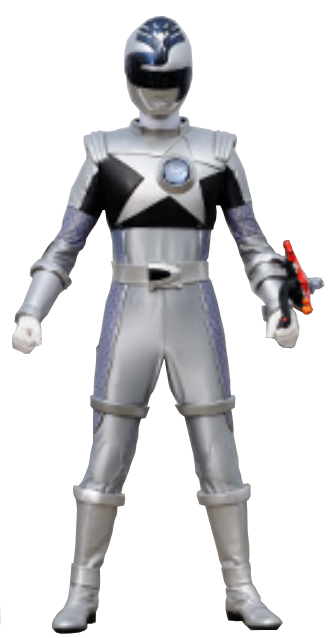 An emotionless warrior from the Ophiuchus system.

Naga Ray's personal Voyager. a Ophiuchus Star System Combat Robot. The Ophiuchus Antenna on the head can allow the Voyager to automatically dodge obstacles, and it specializes in missions on industrial planets full of dangerous objects and harmful waste. The Ophiuchus Sickles on both arms stretch like a snake and attacks with a fierce bite.
Hammie 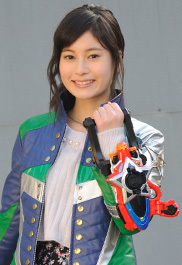 A female alien ninja from the Chamaeleon System. She can change the color of her skin thanks to her chameleon powers. She is very self-motivated but unable to control her emotions due to her youth.

Hammie's personal Voyager, a Chamaeleon Star System Space Hover (Hovercraft). Its small body gives it stealth capabilities and it can easily avoid enemy radar. It specializes in missions involving planets with little-to-no sunlight. Armed with the Chamaeleon Tongue and the Chamaeleon Camera Eyes, it utilizes an Active Camouflage system which allows it to blend into its surroundings and then tie up its enemies by surprise using its tongue.
Raptor 283 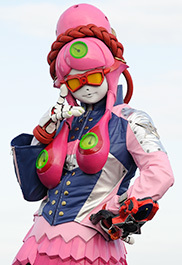 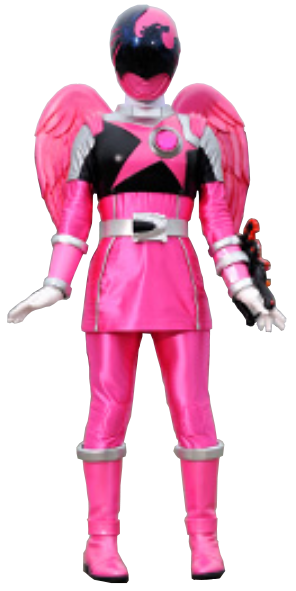 A pilot and secretary gynoid from the Aquila System. Built by Rebellion to helm the Orion.

Raptor's personal voyager; a Cyborg Bird from the Aquila Star System. Using its Aquila Wings it can fly perfectly through bad weather. It specializes in missions to gaseous planets or those with hard to identify land masses. It is able to nosedive from the air at high speeds and attack enemies with its Aquila Beak. 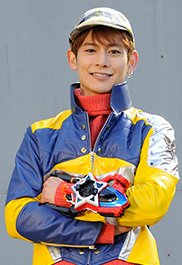 A cook from the Dorado System. His main goal in life is to become the best chef in the universe.

Spada's personal Voyager, a Dorado Star System Space Submarine. Having stabilizers which can hold up against violent currents, it specializes in missions to ocean planets with whirling tides and gigantic waves. Armed with the Dorado Slasher and the Dorado Stabilizer, it can cut straight through the water and jump out suddenly cutting into its enemies like a sword.
Advertisement: 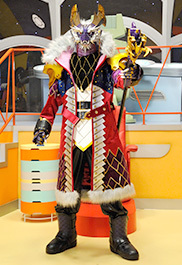 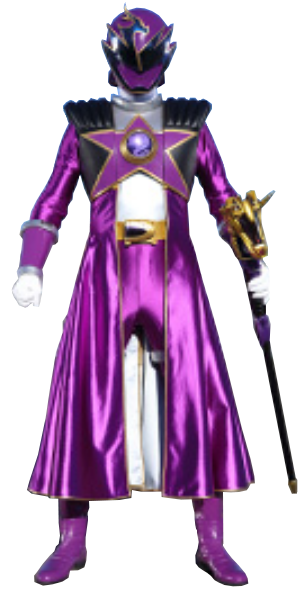 A draconic alien who acts as the Commander of the Orion. He's a veteran warrior who tries to be the coolest person in the room, but comes off like an eccentric old guy.

Due to the nature of certain revelations early in the show's run, certain parts of this folder may have unmarked spoilers, especially further down.

Shou''s personal Voyager, a Draco Star System robot dragon. Originally this was just an ordinary Kyutama incapable of combat like the others. However, Shou's resolve to fight alongside the Kyurangers resulted in a wish being granted to become one of them. Thus, the Kyutama transformed as well, by having the very spirit of the Draco constellation infuse it with its power. The spirit of Draco gained a golden helmet and transformed into the tenth Voyager. It can attack by constricting foes and blasting them with fire.
Kotaro Sakuma 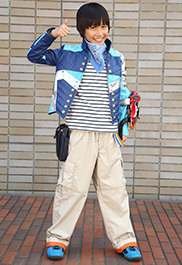 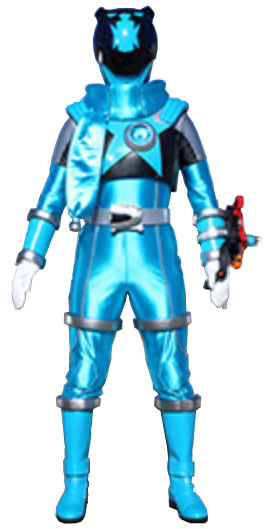 Due to the nature of certain revelations early in the show's run, certain parts of this folder may have unmarked spoilers, especially further down.

Kotaro's personal Voyager, a pair of robot bear motor vehicles representing the Ursa Minor and Ursa Major star systems. Rather than being used separately, the Koguma and Ohguma Voyagers are a tag team that always belong together in a limb formation as one giant "Kuma Voyager", but can briefly separate to perform certain attacks and functions.
Tsurugi Ohtori 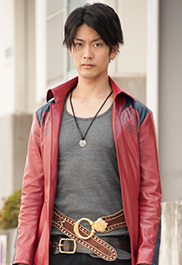 A warrior found within the Argo Ship, where he lay dormant in cryosleep for 300 years. In the centuries before, he was the first man from Earth to travel past the Moon, and also the first one to obtain a Kyutama. Thanks to this, he managed to unite the peoples of the universe as the first President of the Space Federation. When Jark Matter rose to overthrow him, Ohtori also rose to the challenge, and rallied warriors from each of the 88 Constellations to fight back, based on the Argo. In the battle, he managed to land a crippling blow on Don Armage himself, but the battle had taken its toll on him and so he was placed in a cryogenic chamber within the Argo, which was placed into hiding in his homeworld.

Returning to the land of the living, Tsurugi finds out Jark Matter had stricken any mention of his battle against Don Armage from the records, and seeks to rebuild his legend, by himself if he has to - and he definitely thought he had to, until Lucky convinced him that, having the same goal to protect the galaxy, they are all in this together.

Tsurugi's personal transport, and a legendary vessel made up of three constellations. In addition to housing Tsurugi, it can be summoned by Houou Soldier to ambush his enemies. It can also split into three components: Houou Voyager, Houou Base and Houou Station.

Hidden within the body of the Argo, Houou Voyager is a rocket with flame designs emblazoned all over it to resemble a phoenix. Houou Soldier rides in it as his personal voyager, and it serves as the main body of Gigant Houou.

Another component of Argo hidden in its rear sails, Houou Station is a satellite docked in space that combines with Houou Voyager to serve as Gigant Houou's arms and wings. It can also absorb energy attacks, trap foes, and use its solar panels to slice them.

The last component of Argo hidden in its front sail, a mobile rocket base that carries Houou Voyager whenever it's inactive. When not in active use it, along with Houou Voyager are hidden within a mountain.

A huge spaceship who serves as transportation for the Rebellion as well as their home base.

The Kyurangers as a whole have an impressive arsenal with a higher degree of versatility compared to past Super Sentai teams. Each mecha is made of a base robot that can then be substituted with any voyager acting as an arm or leg (as opposed to most previous teams where they were configured for only one location). Due to the nature of this versatility all of their mechas share certain characteristics via the voyagers.

The team's Combining Mecha formed from 5 of the 9 Voyagers (Shishi Voyager being the only mandatory component). Together, they form the Ultimate Space Robot, Kyuren-Oh. By switching around the arms and legs, The Kyurangers have access to 1,680 different docking permutations note or 70 combinations (with even more possibilities following the introduction of new Kyutama and Voyagers, allowing the robot to adapt to any situation.

The team's secondary mecha, primarily piloted by Ryu Commander. Unlike Kyuren-Oh, this mecha is only made of three parts: the mandatory base, Ryu Voyager, and two arm slots (the defaults are Sasori Voyager and Kuma Voyager). It's an impressive machine with access to 36 combinations (or 72 permutations).

The third mecha of the series, piloted, and formed exclusively by two of Houou Soldier's three units: the Houou Voyager and Houou Station. Extremely fast and nimble, what it lacks in versatility, it makes up in raw power.

The fourth mech of the series, piloted (at least in battle) by Shishi Red Orion. Formed by a mere two units, the Orion Voyager and Orion Battleship, it's still the biggest part of the Kyuranger arsenal by a long shot. It can store and deploy Voyager units 1-11 via its Seize Scramble, as well as fire a powerful burst of Kyu energy to back up deployed units.