Another Dimension
aka: Alternate Dimension 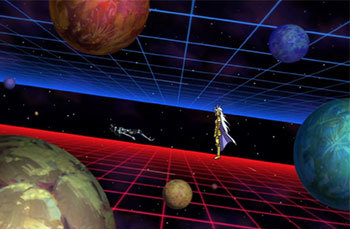 Two degrees eckwards of due fnord, and straight on 'till morning.
"Listen: there's a hell of a good universe next door; let's go."
— E. E. Cummings
Advertisement:

An ancient trope, still used. Another Dimension refers to universes that are "next" to our own, which require magic or high-end technology to travel to and from. In theory, from our world they are in a direction other than the directions we are familiar with.

The popular usage of this term is incorrect; "other dimensions" are not locations, but the means by which you get to them.note And let's not talk about "parallel dimensions", which is a contradiction in its own right. Our universe, as far as we know, contains four dimensions: three dimensions of space, plus time. We have free movement in the first three, but are locked in a continuous forward motion in the last.

Free movement in the fourth dimension is called Time Travel. Free movement in the fifth dimension, or "time squared", is usually seen as jumping sideways from branch to branch within the tree of choices and alternate events that make up the multiverse — so called alternate universes. The sixth dimension, or "time cubed", is where things get really weird — because we as a species don't have the capacity to comprehend what the temporal version of "up" is, we tend to see the sixth dimension as home to wildly alien places with their own laws of physics where literally anything can happen.

Travel to and from another dimension is usually via some sort of door, vortex, portal, gate, window — the exact term depends on the story. Sometimes some kind of teleportation suffices. There may be a Void Between the Worlds to go through to reach them. Characters might need the aid of Weirdness Search and Rescue to get home. Entering the dimension can sometimes be used as an Extradimensional Shortcut. Dimensional Travellers make such journeys regularly, either via a device or spell they possess or as an innate power of their own.

Not to be confused with More than Three Dimensions, which is about higher spatial dimensions.

Despite 'dimension' being a relatively new term for it, the concept is Older Than Dirt. The "fairy lands" of Celtic Mythology and European fairy tales, the various universes of Hindu cosmology, Hell, Heaven and The Underworld, and so on.

Types of Other Dimensions:

If you were expecting to find anything related to Dragon Ball Z, you're looking for Never Say "Die".