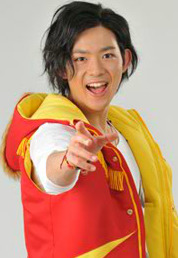 The son of Dantetsu Kiryu, Daigo is the courageous leader and ace of the team. Before joining the team, Daigo was a wandering vagrant who travelled the world helping out others and learning from them in turn. He acquired his nickname, "King", due to his presence of personality and overall greatness.

A cocky and stylish charmer from Europe. Ian is a playboy with a sharp and analytical mind, though he also possesses an antisocial streak and takes the longest to fully acquaint himself with the team. His speciality is shooting. 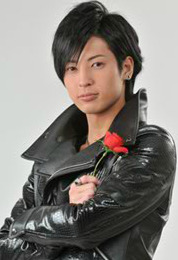 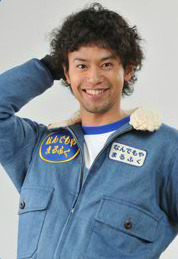 An affable and reliable handyman with an affinity for cracking awful "dad jokes". Nobuharu works hard as a Kyoryuger to protect his beloved family from the influence of evil, and tends to be on the receiving end of comic relief. His nickname is "Nossan" (taken from his name and "ossan," a Japanese expression for "old man"; a loose English equivalent to "ossan" would be "Pops").
Souji Rippukan / Kyoryu Green 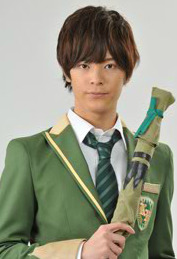 A cold and focused high-school swordsman who is the son of Genryu Rippukan and Reiko Tanba. Souji is the heir to a legendary school of swordmanship, which he has combined with his own personal, savage style to great effect. Though quiet, he is the first to act when something offends him.
Amy Yuuzuki / Kyoryu Pink 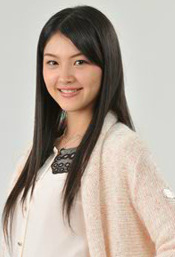 A multi-millionaire heiress with a tough streak. Amy was raised in high society, but feeling that her true personality was more untamed, secretly underwent training to turn herself into a fighting powerhouse. Despite her wealth, she holds down a job as a server at a cafe.
Utsusemimaru / Kyoryu Gold 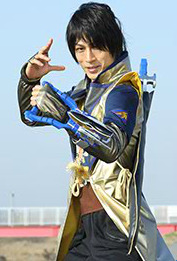 The partner of Pteragordon (#6), a samurai who fought during the Warring States Era in Japan 400 years ago. After seeing many of his comrades killed in battle and Torin about to be executed by the hands of Dogold and Chaos he went into a violent rage, where in which Dogold took advantage of him and Utsusemimaru was sealed inside of Dogold's body until he was freed by the present day Kyoryuger. He transforms using the GaburiChanger.

Apart from the main team, there have been other Kyoryugers that existed throughout history. They are partnered with Zyudenryu #7-10, and though they never formed a team themselves, they now support the current Kyoryugers in their battles- two of them assist as spirits after having died fighting Deboss, while one of them, Dr. Ulshade, retired as a Kyoryuger after undertaking one last mission in space before handing down the powers to his granddaughter Yayoi. And Torin had partnered with Bragigas back when the Zyudenryu were transformed, though he did not become a Kyoryuger until the modern age.
General Tropes
Ramirez / Kyoryu Cyan

The partner of Ankydon (#7), who fought during the Dark Ages against Debo Virsun. Ramirez is a Caucasian Kyoryuger who speaks in accented broken Japanese, and has a tendency to lighten the mood by cracking jokes.
Tessai / Kyoryu Gray

The partner of Bunpachy (#8), a powerful martial artist from China that lived 1500 years ago. He is from a clan that mastered the Tessai-Ken or "Iron-Breaking Fist", and returns to teach the current team the technique, as well as to train them to be stronger.
Doctor Ulshade / Kyoryu Violet I

The partner of Plezuon (#9), a scientist living in the modern age that created the weapons for the team. He went away to study the meteor that Deboss originated from and is currently planning to retire as a Kyoryuger. Working with him is his granddaughter, Yayoi.

Granddaughter of Doctor Ulshade/Kyoryu Violet and helped with the creation of the Gaburevolvers and Zyuden Arms. She later inherited the title of Kyoryu Violet after her grandfather's retirement.
Torin / Kyoryu Silver 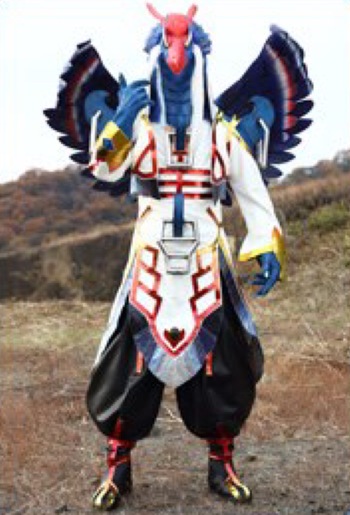 The divine mentor of the team, who gave them their powers and can sense when the Deboss Army is on the move. Also revealed to be not only the Deboss' Demon Sword Priest turned good, but also the partner of Bragigas (#10) all along. He had been looking for the fossilized ambers to revive it. He later transforms into Kyoryu Silver in #36. However in #45, Torin is killed by none other than Dantetsu himself, making the latter the new Kyoryu Silver.

Take note, many of his character tropes relate to the above spoilers.

Daigo's father. He one day mysteriously vanished, leaving Daigo with some money and a pendant which resembles a mysterious stone that Aigaron stole from Ian's best friend. In Brave 45, he allies with the Deboss Legion, betraying and murdering Torin and stealing the Kyoryu Silver powers; turns out this seeming act of betrayal is part of a larger scheme Dantetsu and Torin cooked up to severely cripple the Deboss Legion.

Nobuharu's sister. A widow and single mother, she dislikes both the Deboss and the Kyoryugers, believing them to be equally dangerous. Her greatest contempt is for Kyoryu Blue, who she does not know is her own brother.

Nobuharu's six-year-old niece who has become a Secret Keeper regarding her uncle's identity as Kyoryu Blue. Despite her age, she's quite mature.

Souji's father and head of the family sword fighting style. He originally disapproved of Souji's more savage style, but accepted it as Souji proved his own strength in combat.

Amy's overbearing and strict butler that watches over her while her parents reside in the USA.

The manager of the kendo club at Souji's school. She has a crush on him, but he doesn't realize, much to her frustration.

A popular idol who appears in the Gaburincho of Music movie. An acquiantance of Daigo's, she is kidnapped by Deathryuger to help him gain control of the powerful Zyudenryu Tobaspino.

A direct descendant of Tessai's, he is a mangaka who is the creator of a shoujo manga that Amy and Luckyuro both enjoy.

Each of the Kyoryugers have a companion beast. These were dinosaurs modified to battle the Deboss Army in the past.

Daigo/KyoryuRed's partner, a red Zyudenryu based on Tyrannosaurus rex. Forms the bulk of Kyoryuzin, and normally resides in a volcano on a tropical island until called upon.

Ian/KyoryuBlack's partner, a black Zyudenryu based on a Parasaurolophus. Forms the right arm of Kyoryuzin and PteraidenOh Western, serving as an Arm Cannon, and normally resides near a European castle until called upon.

Nobuharu/KyoryuBlue's partner, a blue Zyudenryu based on a Stegosaurus. Forms the right arm of Kyoryuzin, forming a shield and the Zyudenkennote Electro-Beast Sword when all five Kyoryugers pilot Kyoryuzin. It resides beneath the ice of the North Pole until called upon.

Souji/KyoryuGreen's partner, a green Zyudenryu based on a Velociraptor. Forms the left arm of Kyoryuzin and PteraidenOh Western, serving as a claw, and normally resides in a Japanese bamboo thicket until called upon.

Amy/KyoryuPink's partner, a pink Zyudenryu based on a Triceratops. Forms the left arm of Kyoryuzin, serving as a drill, and resides within the walls of the Grand Canyon until called upon.

Utsusemimaru/KyoryuGold's partner, a gold Zyudenryu based on a Pteranodon. It can transform into Pteraiden-Oh or combine with Kyoryuzin to form the Raiden Kyoryuzin. Resides in a volcano near by Gabutyra's resting spot, and can often be found flying around inside a thunderstorm.

Ramirez/KyoryuCyan's partner, a cyan Zyudenryu based on an Ankylosaurus. Forms the right arm of Kyoryuzin Macho and Kung Fu, serving as a hammer. Rests underground below a rock quarry until summoned.

A violet and white Zyudenryu based on a Plesiosaur. Has three modes: normal Zyudenryu, rocket ship, and the Zyuden Giant Plezu-Oh, which transforms via "Rocket Transformation". It can swap out its left arm for Bunpachy to form Bupachy Plezu-Oh, and adding Gabutyra to the combination makes Bakuretsu Kyoryuzin.

Was originally the partner of Dr.Ulshade/KyoryuViolet I, but is now bonded with his granddaughter and successor Yayoi/KyoryuViolet II. And like everyone else on the team, is great friends with Daigo.

A silver and gold Zyudenryu based on a Brachiosaurus. Has at least three modes: normal Zyudenryu, Zyuden Giant, and a combined form (or at least parts of it) with the first five Zyudenryu. And to top it off, it can store the Zyudenchi of the thirteen Guardians in its back. Further, the Spirit Base is contained within his body. Wears armor on his body of the fallen Guardians. Transforms via "Super Snapping Transformation."
Tobaspino

These Zyudenryu have no physical bodies, instead granting special powers to the team through their weapons and mecha. It is revealed later that each of them did have a body, but were gravely injured during the initial battle with Master Deboss and could only give Torin their Zyudenchi before passing on.
Deinochaser

A pair of small Zyudenryu mechs, both based on a Deinonychus. Rather than forming into a mecha, they combine to form the team's motorcycle. And unlike the mechs with independent bodies, there can be one bike for each battery.
Deinosgrander

A Zyudenryu based on a Deinosuchus capable of forming a double-claw weapon for the Kyoryugers.
Kentrospiker

A Zyudenryu based on a Styracosaurus. Anyone hit from a shot by this immediately falls in love with the first object they see.
Allomerus

A Zyudenryu based on an Allosaurus. This battery gives the user's weapon the ability to emit a flame hotter than the sun.
Beyonsmo

A Zyudenryu based on the Diplodocus. This battery gives the user the ability to stretch their limbs.
Ovirappoo

A Zyudenryu based on an Oviraptor. The user is given the ability to emit a cloud of foul-smelling odor.
Igerandon

A Zyudenryu based on an Iguanadon. Anyone hit from a shot by this is tickled by the shot, making them laugh uncontrollably.
Tuperanda

A Zyudenryu based on a Tupendactylus. Anything shot by this becomes flat and very flexible.
Gurumonite

A Zyudenryu based on an Ammonite. Anyone shot by this becomes dizzy.
Archenolon

A Zyudenryu based on an Archelon. When this battery is activated, it emits a small gravity field that slows down everything caught within it.
Pukuptor

A Zyudenryu based on a Fukuiraptor. This battery gives the target the ability to inflate and fly against their control.
Futabain

A Zyudenryu based on a Futabasaurus. This battery gives the target the ability to copy themselves or others.

The mecha which consists of the various combinations of the Kyoryugers' partners, the Zyudenryu.
Kyoryuzin

The primary robot of the Kyoryugers, normally consisting of the Zyudenryu Gabutyra (main body), Stegotchi (right arm), and Dricera (left arm). It can have other combinations simply by swapping the arms of Kyoryuzin.
Pteraiden-Oh

The mecha of Kyoryu Gold. When used by Deboss it was controlled by evil spirits and piloted by Dogold. It may operate on its own, or swap out its arms with other Zyudenryu.
Plezu-Oh

The mecha of Kyoryu Violet. Unlike Kyoryuzin or Pteraiden-Oh, it can only swap out its left arm due to the fact that the right arm is formed by the head of Plezuon.
SpinoDaiOh

The mech of Kyoryu Silver, and the humanoid form of Bragigas. Unlike the other Zyuden Giants, it seems incapable of swapping its arms.

A descendant of Daigo and Amy, chosen by Candelira to become the leader of the Kyoryugers of 2114.
Nobuta

A descendant of, not Nobuharu as one would expect, but rather Rika.
Ami

Dai's sister, another descendant of Daigo and Amy.
Soujiro

A descendant of Souji.
Uppi

A descendant of Utsusemimaru, who is a pro bowler.
Icchan

A descendant of Ian, who is a musician.