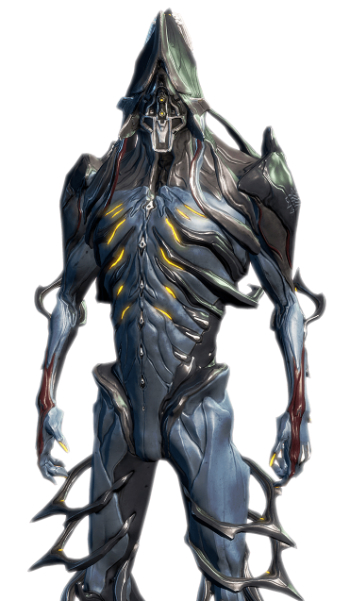 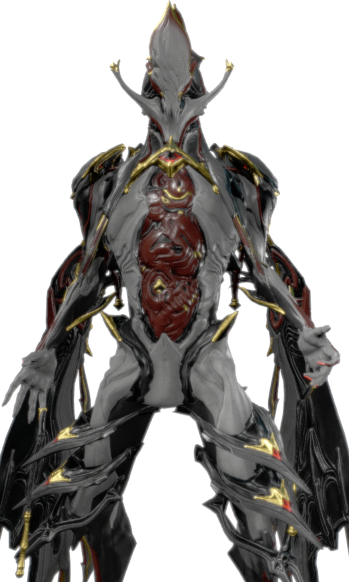 Fear is a weed, snaking in the dark. It vines within the mind, corrupting it. It germinates within tribes, dividing them. Your graces, we who are beyond death, have forgotten the simple power of fear. Let us now remember. You will find no greater power than the simple thought of your own name, inscribed upon a grave.
Our harbinger. Our Terror. Nekros.
— Ballas, Warframe: Nekros Prime

Rising up alongside Mag Prime with Update 10.0 in 2013, the Necromancy-themed Nekros was the runner-up for the first Design Council Warframe, though his abilities were chosen without player input. He manipulates clouds of nanobots to simulate the stereotypical effects of dark magic such as damaging his enemies' souls, striking fear into their hearts and reviving their dead under his control. 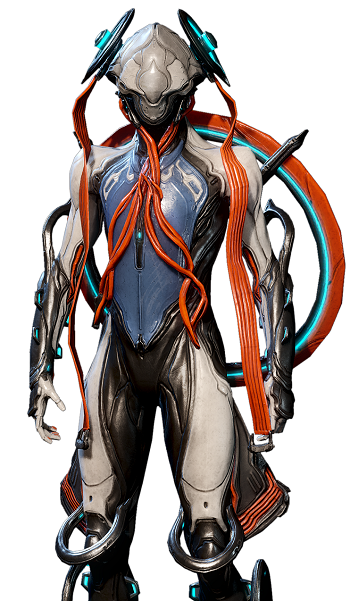 This is Nezha, the protector, the quick.
Feel the heat, Tenno. Nezha is a burning thing, and he makes a fiery ring.
— The Lotus

A fire-based Warframe. Unlike Ember, Nezha focuses on the defensive and utilitarian properties of fire. Like Wukong, Nezha is another Warframe originally released in China then blazing a trail to the global build in Update 18.1 in 2016. 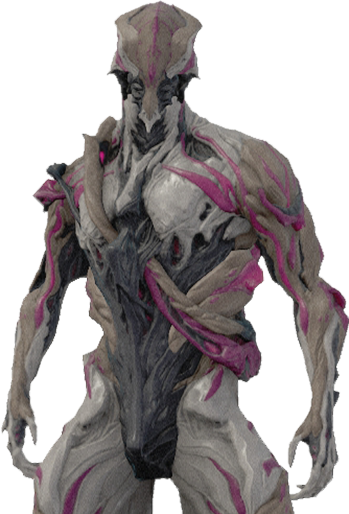 This is Nidus, the adaptive, the scourge.
Nidus is a deadly plague for which there is no cure. You must control the strange disease.
— The Lotus

An Infested-themed Warframe whose strain developed with Update 19.5 in 2016. Nidus is unique in that he grows in power over the course of the mission, by spreading the Technocyte Plague to enemies through his abilities. Like Inaros, Nidus has no shields; unlike Inaros, none of his abilities leech health. To compensate, he has innate health regeneration, stronger armor, and powers that focus on crowd control. 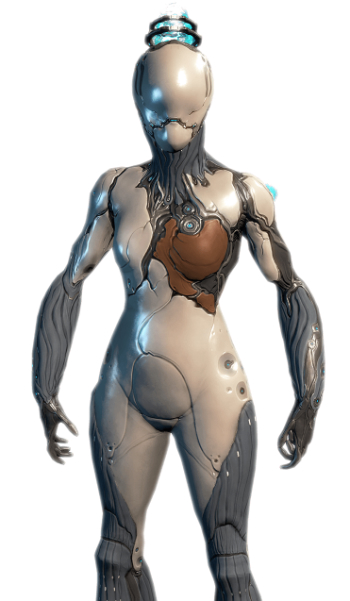 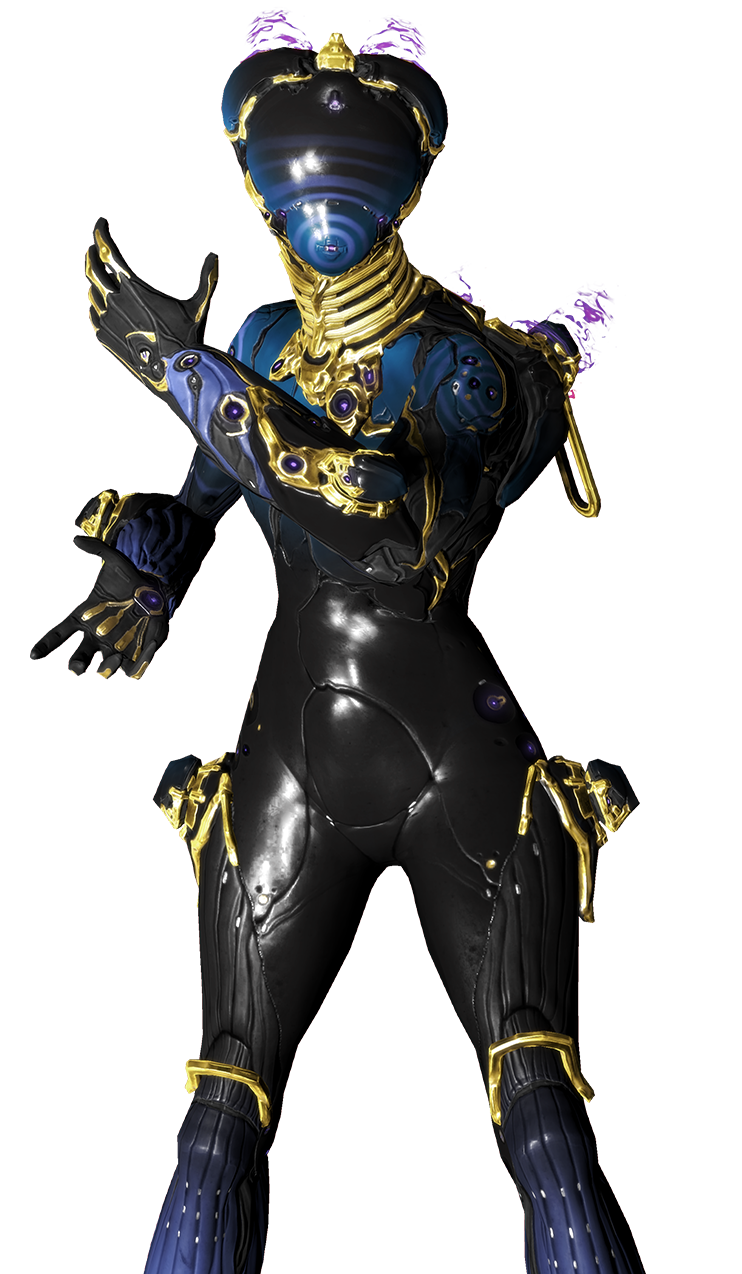 This is Nova, wildly unpredictable.
Nova's presence on the battlefield is complex and deadly. Handle with care, Tenno.
— The Lotus

Detonating with Update 9.0 in 2013, the antimatter-themed Nova bears the distinction of being the first Warframe whose design was influenced by player feedback via the Design Council. She is a Glass Cannon through and through, specializing in dishing out ridiculous amounts of damage at medium-to-long range and falling quickly if she gets cornered without Energy. 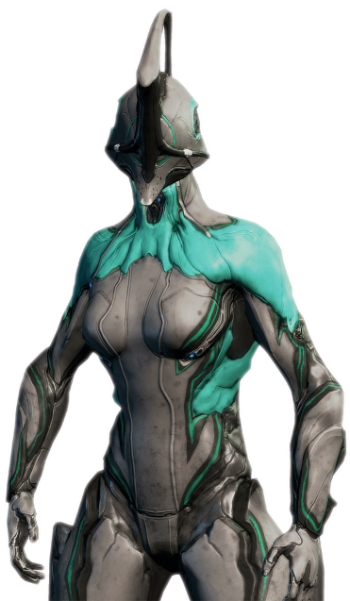 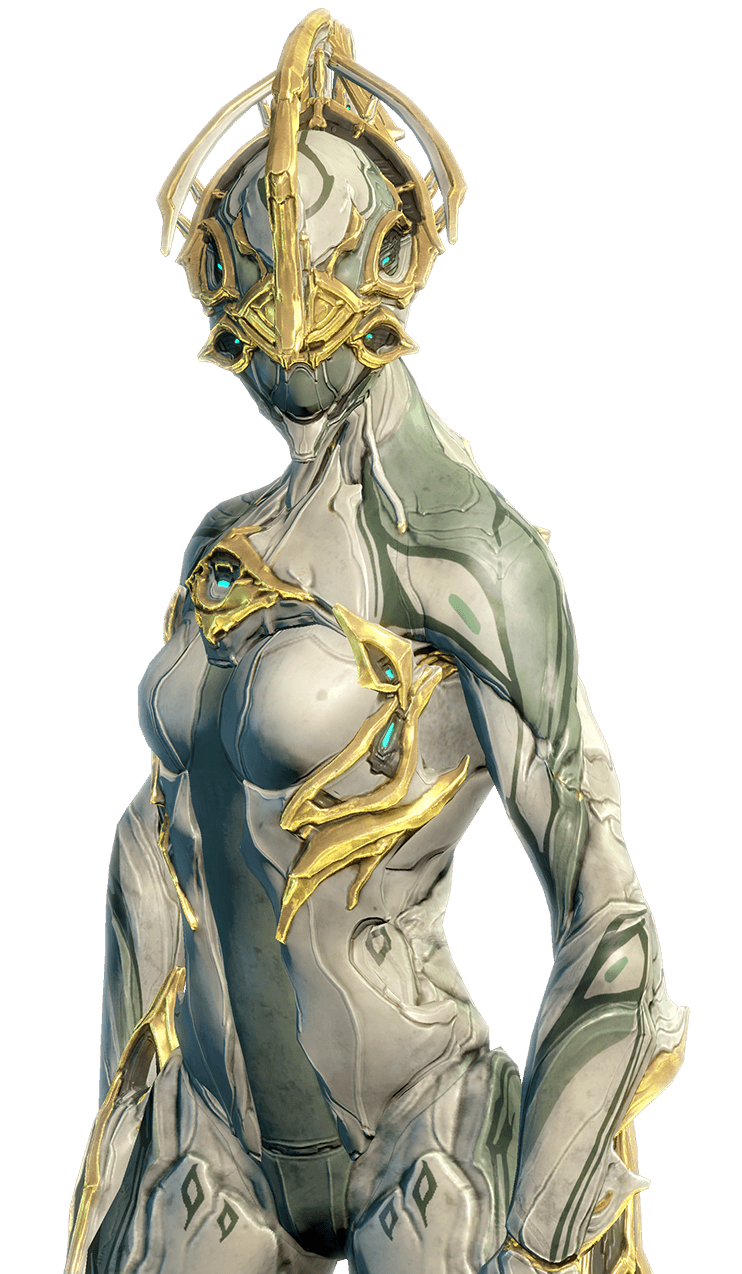 This is Nyx, manipulator of minds.
On her own or with a group, Nyx can turn the tide of battle in her favor.
— The Lotus

Nyx is a psychic Warframe who is infamous for her sheer utility in missions with large groups of enemies that would swamp other characters. She achieves this by causing her targets to fight each other for long periods of time and kill or heavily damage themselves in the process. 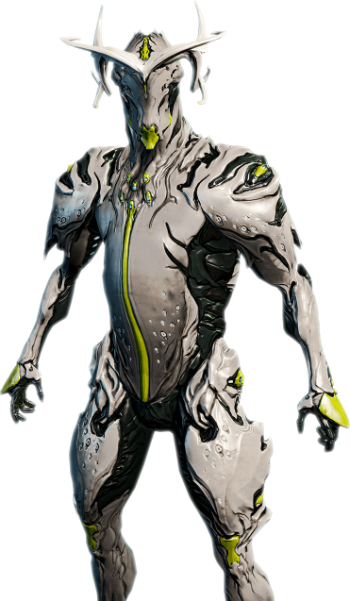 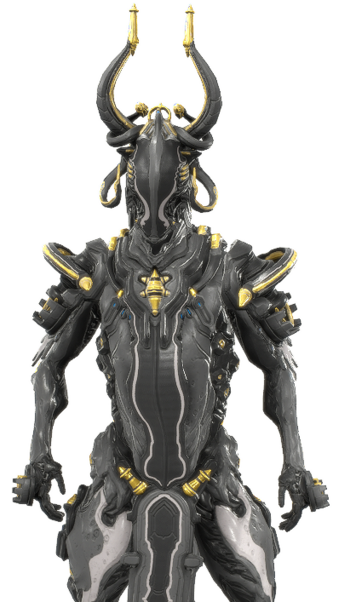 "Greed and denial will seduce any destruction... even our own. We're blind to future consequence, casting our debts on those to come. But what if now, the Gray Mother sought revenge? A brutal thorn... piercing the gushing ulcers of waste and industry. A new green... sown upon sanguine ground.
Fertilized... with the blood and bone of its defilers. Oberon."
— Ballas, Warframe: Oberon Prime

Oberon is a paladin Warframe who came to light with Update 11.5 in 2013. Unlike Trinity, he is built with a balance of healing and damaging skills. 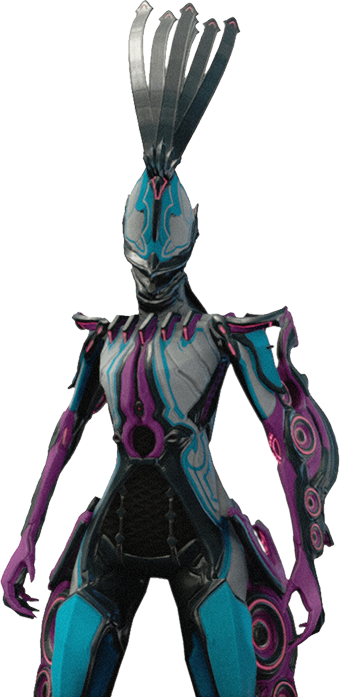 This is Octavia, the melodic, the maestro.
If music be the food of death... play on, Tenno.
— The Lotus

A bard-themed Warframe whose beat dropped with Update 20.0 in 2017. While she and Banshee each use sound as a primary weapon, Octavia focuses on using music to enhance her allies and enchant her enemies. Her main blueprint is obtained from the "Octavia's Anthem" quest offered by Cephalon Suda.

Armed for deadly encounters, she is tactical and timely. This is Protea, the protector, the enforcer.
Protea is the method to the madness. When you face her, it's already too late.
— Lotus

Protea is a Combat Engineer Warframe similar to Vauban deployed with "The Deadlock Protocol" in 2020. 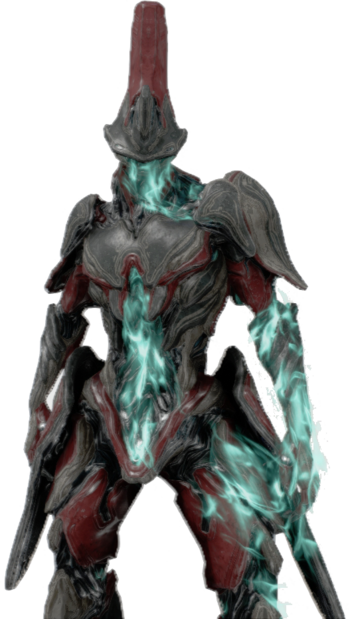 This is Revenant, the returned, the condemned. Harnessing the essence of Eidolon and Warrior alike, he mystifies and obliterates his foes.
Revenant serves last rites for the souls he leave on fire, without a plea for mercy.
— The Lotus

A Sentient Eidolon themed Warframe risen back from the grave in Update 23.5 The Mask of Revenant in 2018. Revenant's abilities theme around converting and spreading control over his enemies and siphoning their life to help him and his allies. His main blueprint drops after completing Mask of the Revenant, with part blueprints dropping from Cetus bounties. 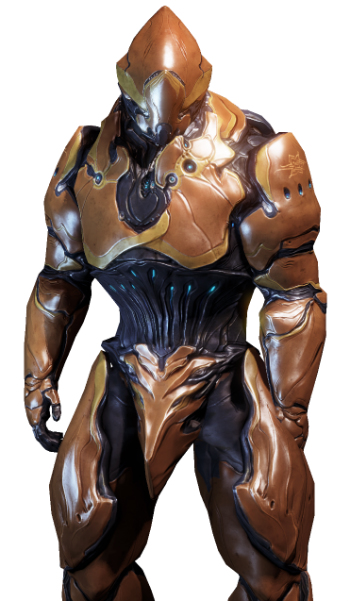 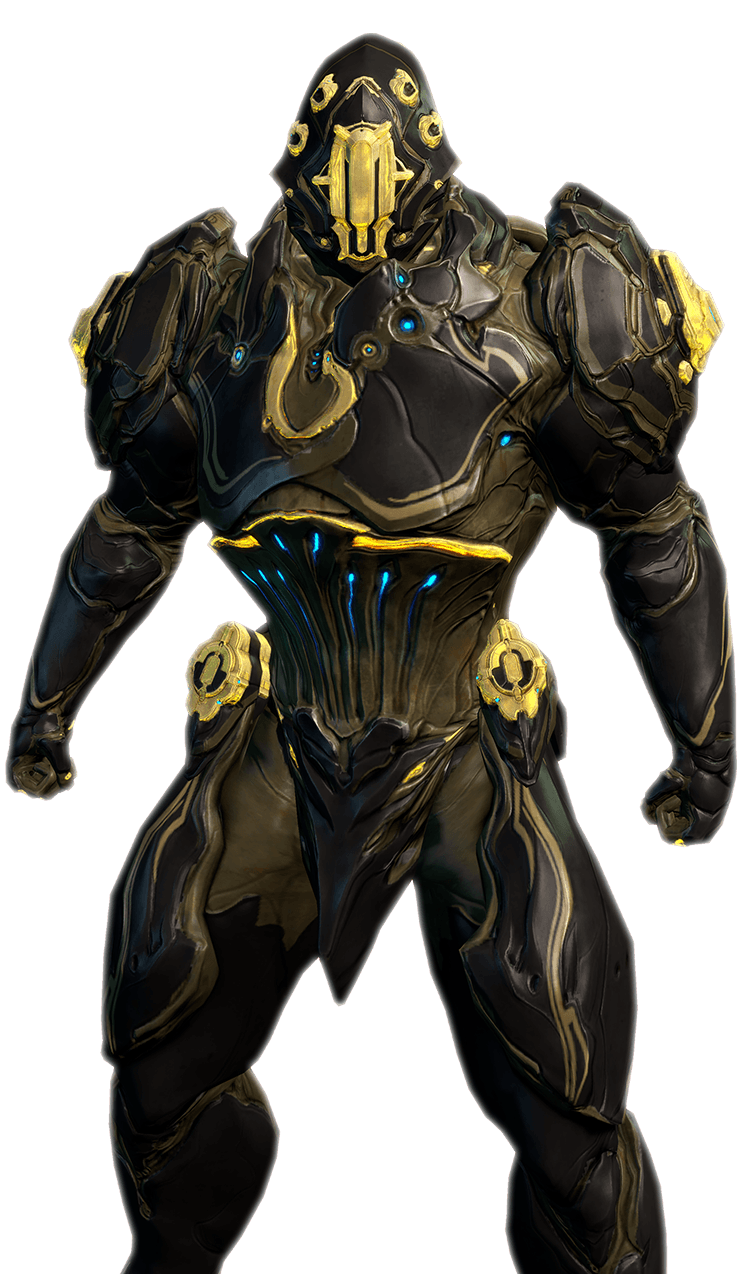 This is Rhino, an immovable force and highly resilient.
Rhino can survive alone or become the cornerstone of any squad, Tenno. The choice is yours.
— The Lotus

Rhino is one of the heaviest Warframes in appearance, mobility and stats. He is a textbook Mighty Glacier who is an offensive juggernaut who can give just as much as he gets. His skills are focused on crowd control and he can buff the damage output of his teammates to help them clean up afterwards. Until Chroma, he was the only Warframe to be EXP-locked.

Rhino was one of the first eight Warframes to be released with the game's "Vanilla" version in 2012; and Rhino Prime stampeded onto the scene with Update 12.4 before retiring to the Prime Vault with Update 15.7 in 2014. 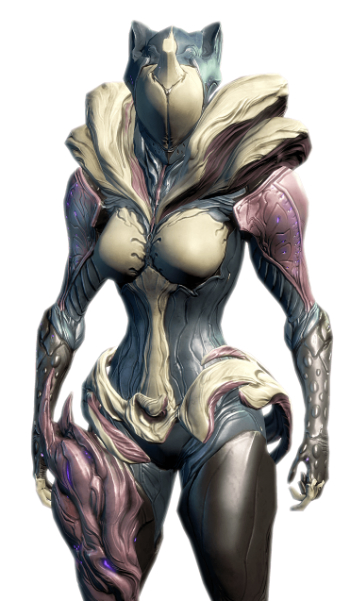 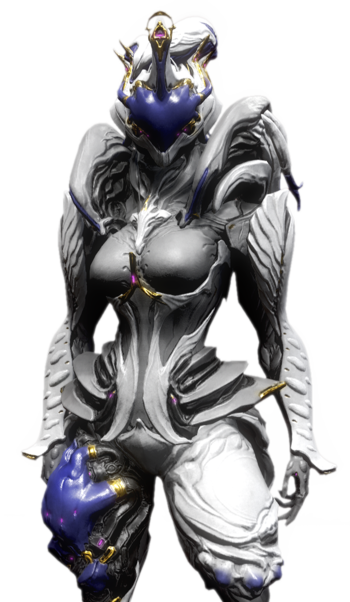 "Margulis, from your wilted ashes has sprung a field of flowers. Conceived by me. Germinated for deadly purpose. You used to dream of old Earth didn't you? Bathed in gold and solemn blue. I intend to reclaim it now, from the Spores and the Ruin. It came to me, like a proverb: Fight poison with poison.
Cure this sick horde with the greatest of plagues. I will call her... Saryn."
— Ballas, Warframe: Saryn Prime

One of the heaviest female Warframes, Saryn is a close combat beast with good defensive stats, a poison buff for her melee weapons and an instant-cast decoy ability to lose enemy attention if things get too hairy. She is also deadly against armored targets with her ability to inject them with highly corrosive toxins that bypass all their defenses. 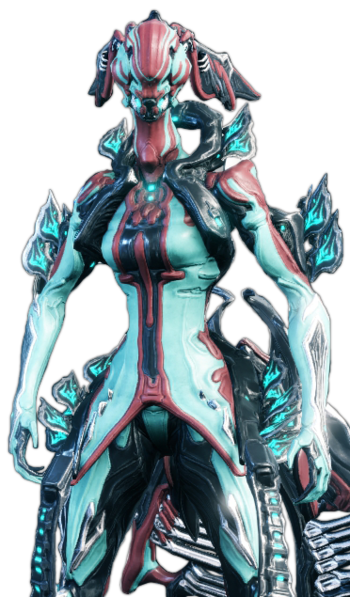 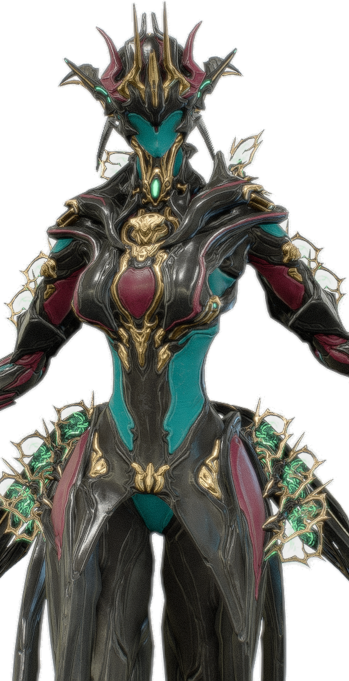 This is Titania, the pixie, the unseen.
Titania is a deadly and mischievous addition to any squad, but don't take my word for it, Tenno.
— The Lotus

Titania is a fairy-themed Warframe, fluttering in during the third of four lead-in updates to Update 19.0 in 2016, "Update: The Silver Grove". A support-oriented combatant, her skillset can lock enemies down, manipulate their aggro, and uses their 'souls' to provide various debuffs that help increase the survivability of herself and allies alike. 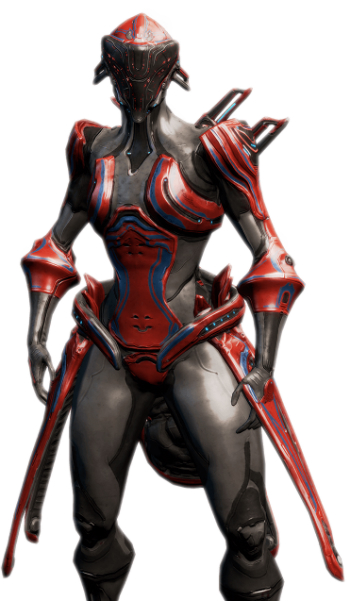 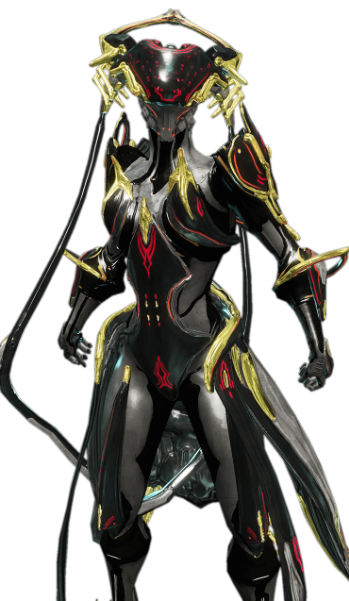 This is Trinity, the healer, the equalizer.
Trinity is a must for any high-stakes mission. She'll save your life, Tenno.
— The Lotus

Trinity is an archetypal healer with a vampiric twist. Her skillset is completely defensive and allows allies to drain both health and energy from targets or avoid damage by redirecting it back onto an enemy.

Trinity was one of the first eight Warframes to be released with the game's "Vanilla" version in 2012; and Trinity Prime was converted with Update 17.6 in 2015 before retiring to the Prime Vault with Update 21.6 in 2017. 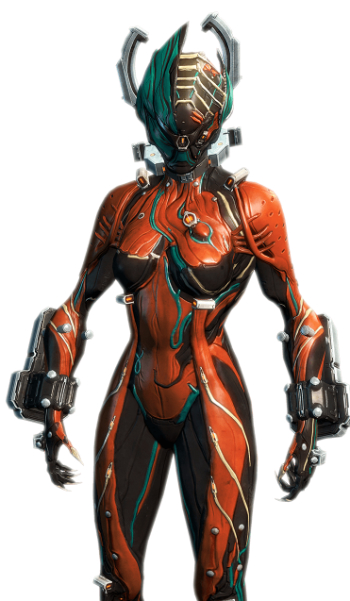 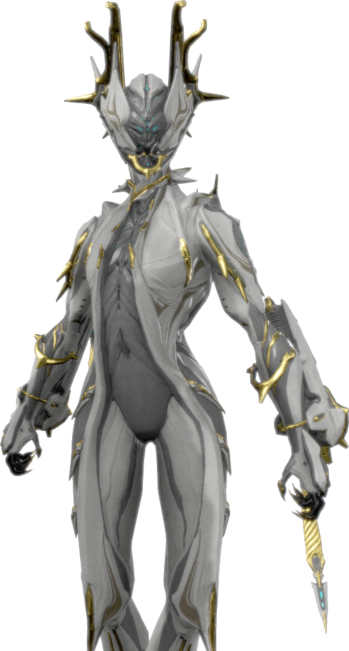 "Our long deathless winter has left us numb. Our wasted animal within, ugly and gaunt, hibernates beneath our shimmering beauty. Why do these Warframes stir us so? They burn with our lost desires, lost instincts. Tenno tamed, but only just. Cast and hunted as game. Trapped and tortured, yet they remain... animals. Less than their human seed, gnawing their limbs from the snare, devouring a banquet of suffering, obese with heat and acid... and rage.
That is why they will destroy us."
— Ballas, Warframe: Valkyr Prime

A berserker Warframe uncaged alongside Ember Prime in Update 11.0 in 2013. She is said to be an escapee from the Corpus's Zanuka Project. 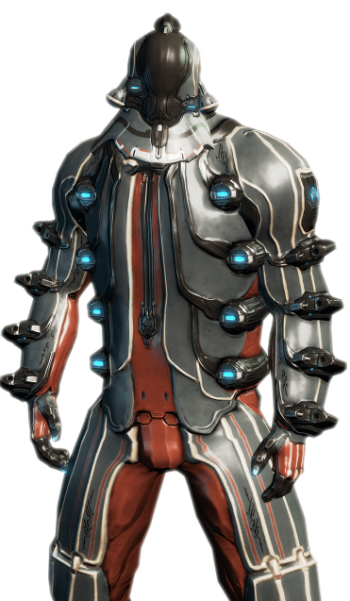 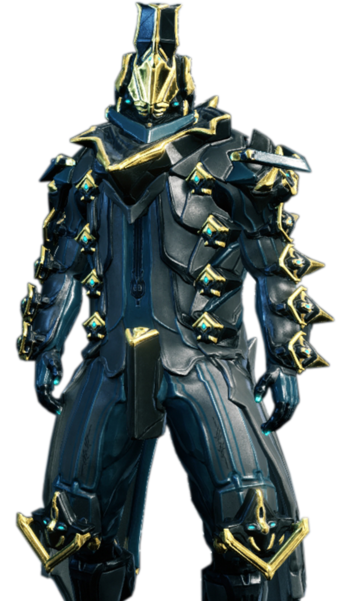 "Lust was my sin. But greed is the blight that weakens our steel. These industrialists... gorged on the harvest of our long war. Their mind-drones, their mechanizations, toil in foundries remote. For what purpose? We must set watch upon them, baiting our snares with the worms of profit. Those who kneel at the altar of commerce will be returned to the Void.
For your consideration... Vauban."
— Ballas, Warframe: Vauban Prime

The Combat Engineer Warframe deployed with Update 8.0 in 2013, Vauban has the unique twist of deploying his abilities through specialized grenades. This gives him a longer reach than most of his compatriots and allows him to fortify multiple sections of a map at once. He is currently considered the most effective of the utility-centric Warframes. His kit received an overhaul in Update 26.0. 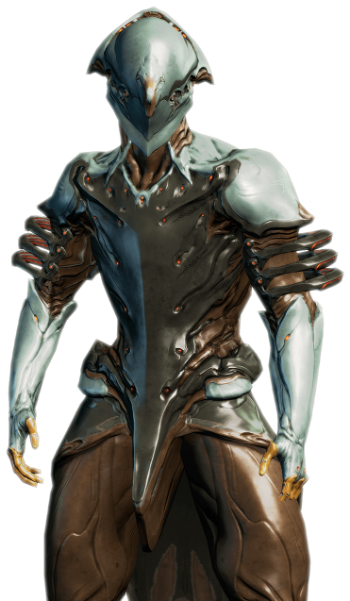 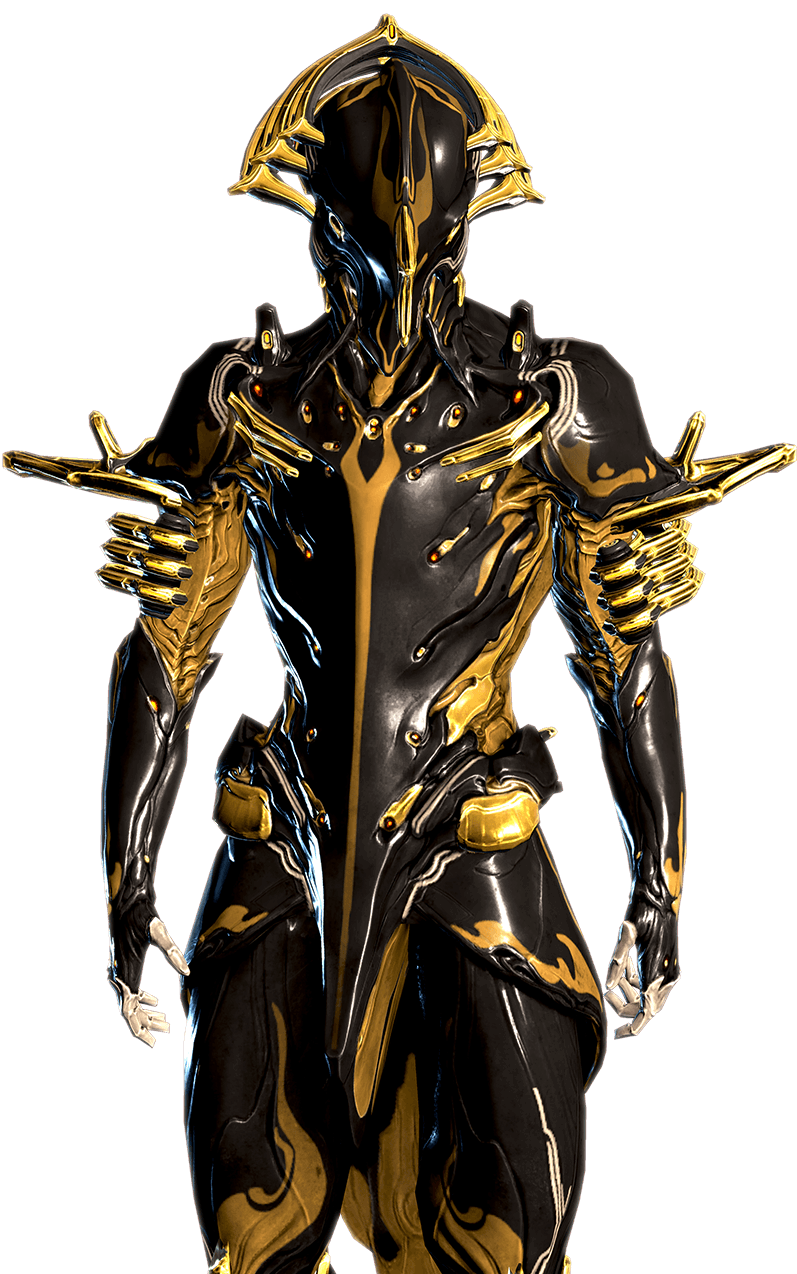 This is Volt, a versatile warrior.
Volt's arsenal is powerful and electrifying. Handle with care, Tenno.
— The Lotus

A nimble ability-oriented Warframe with the power to generate and control powerful electric currents. He is exceptionally devastating against the Corpus and their robotic proxies but while he tends to feel a bit lackluster against the other factions (which have some resistance to electric damage) his skills nevertheless offer a balanced range of utility. Volt was originally a starting Warframe before being replaced by Mag in Update 7.0, but returned to the roster in Update 14.0 replacing Loki. 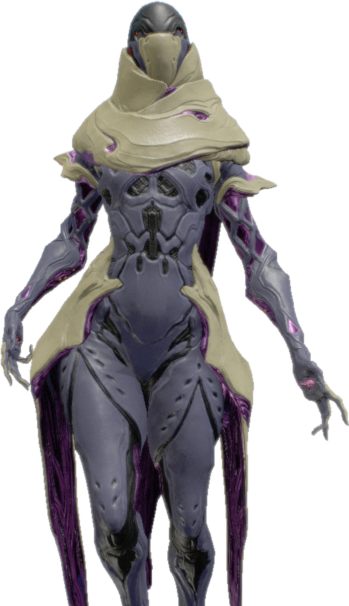 Invisible in the air, and swift on the ground, she moves like the wind. This is Wisp, summoner of the ethereal.
Her grace is balanced only by her destruction. Do not get lost in its wake, Tenno.
— Lotus

A will-o'-the-wisp inspired Warframe that flickered to life with Update 25.0 "Jovian Concord" in 2019.

This is Wukong, the enduring, the swift.
Everybody's got something to hide, Tenno. Except Wukong.
— The Lotus

A melee-focused Warframe inspired by Sun Wukong of Journey to the West fame. Fights with trickster powers much like his namesake. Got an early release in the Chinese version before journeying over to the main build with Update 17.12 in 2015, and getting a rework in Update 25.2.0 in 2019.

Xaku
Forged from the remnants of lost Warframes, they channel spirits of the void. This is Xaku, the fragmented, the restored.
In the concert of mayhem, Xaku is a law unto themselves, Tenno.
— The Lotus 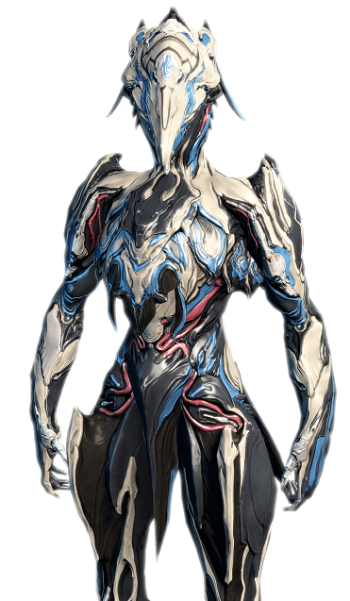 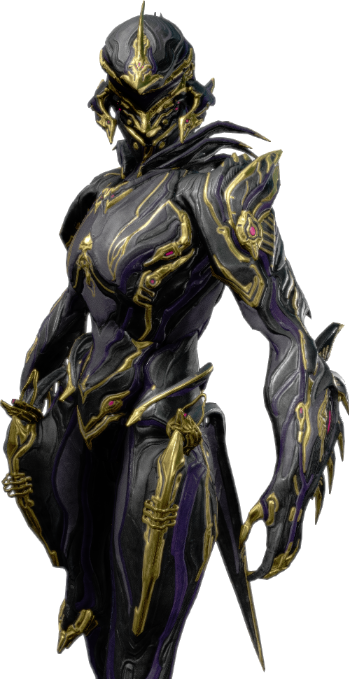 This is Zephyr, light, yet deceivingly lethal.
Zephyr brings graceful destruction to the battlefield. Look up, Tenno.
— The Lotus

An avian-themed Warframe with wind powers who soared with Update 12.0 in 2014. She is noted for her high mobility, as well as her air-support potential.