Warning: This page has contents of The Second Dream and onwards. Expect heavy spoilers.

The playable characters of Warframe.

A Proud Warrior Race of armored warriors with esoteric powers who existed during the fabled age of the Orokin Empire, which is also the source of their powered suits. The Tenno, while fighting for and protecting the Orokin people from their ancient enemies, were not part of the Orokin themselves. At the start of the game, the Tenno are being revived from cryosleep to fight once more to protect the Origin System from those who would harm the remnants of civilization.

open/close all folders
Warframes in General 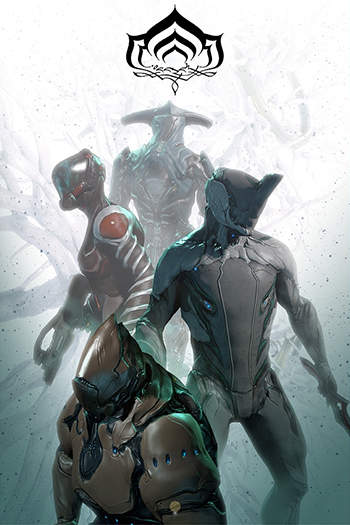 For generations, you slept. No purpose. No call to awaken you...
...We built a Frame around them, a conduit of their affliction. Gave them the weapons of the Old Ways. Gun and Blade.
—Excerpt from Orokin "Warframe" Archives

The titular frames the Tenno use in battle. Each Warframe is built with a specific purpose or "theme" in mind, such as Elemental Powers, animal themes, geographical or historical concepts, or particular weapons and fighting styles.

Player Characters (Warframes)
Due to the page's length, the Warframes have been put into their own separate pages.
Prime Warframes
The Operators (Spoilers) 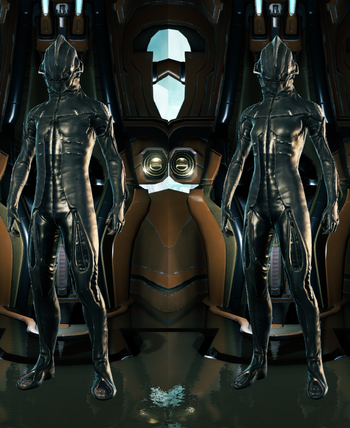 The male and female Operators in their default suit.
"This is who you really are: A Tenno. More than human, but once a child like any other."
—The Lotus

The Tenno, human children who somehow managed to survive aboard the Orokin colony ship Zariman Ten-Zero after a Void jump accident sent it listing in the Void for years before reappearing near Saturn, giving them incredible, if horrific, powers.

Necramechs
Robots created by the Entrati as precursors to the Warframes the Tenno use. 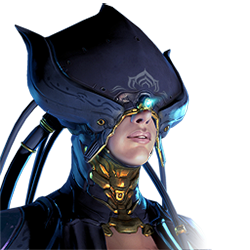 Great work. I am pleased with your performance.
Voiced by: Rebecca Ford
"I am the Lotus. I will guide you, but we must hurry."

A mysterious woman who guides you through your missions and gives you objectives. She's the one who awakened the Tenno from cryosleep in the first place. 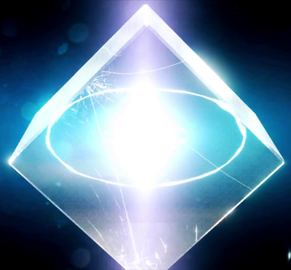 Operator? Ordis wonders... What are you thinking about?
"I am Ordis, ship cephalon, a shadow of my former self."

An AI (or rather, a Cephalon) that resides within the Tenno's Orbiter which houses their Landing Craft, stealth dropships introduced in Update 14. Players will need to rebuild the ship via the "Vor's Prize" questline.

See the Conclave entry in the Syndicates page. 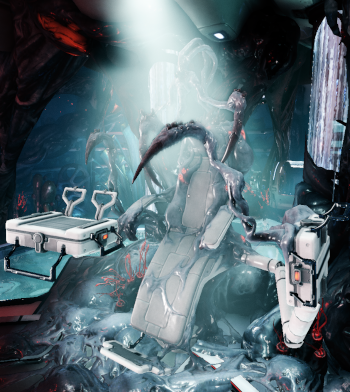 "(Living substances is our domain. How will we serve you.)"

A sentient Infested infection who dwells behind a similarly Infested door in the player's Orbiter. While Ordis is not a fan of it being on the ship, it seems to be loyal to you for whatever reason, and so he grudgingly tolerates its presence. It will only allow you into its room while playing as Nidus, which it calls "Master", or as any Warframe with a mature Helminth Cyst, which it can remove for free and inoculate the Warframe from future infection.

A Tenno cast out and separated from the rest by the Orokin, Rell was a child with an unspecified mental conditionnote Autism, according to Word of God. Notable for being the only Tenno NPC in the game so far. 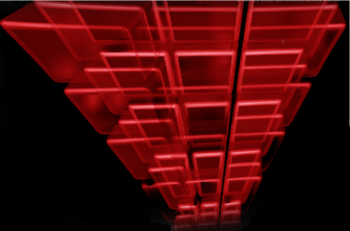 On this ship we work before we play.
"I am Cephalon Cy. You will refer to me as such."

Another Cephalon similar to Ordis in function if not in personality. Like Ordis he assists the Tenno by managing and running their spacecraft: the Sigma-series Railjack, a larger interceptor vessel capable of performing in open combat. The Tenno create his imprint after researching it in their Dry Dock, and after installing him Cy guides them in assembling their own Railjack.

General
Excalibur Umbra
Ferocious and untamed, Umbra's fury is second only to his mastery of the blade.
— Excalibur Umbra's description

The third variation of Excalibur first introduced in the Chinese build of Warframe in 2015 as "Excalibur Umbra Prime", with stats identical to Excalibur Prime as the founder's pack frame to the version's release.

He eventually arrived howling into the fray in the global build's "The Sacrifice" Update in 2018, stats matching Excalibur Prime, alternate ability and passive, and introducing the exclusive Umbra polarity.