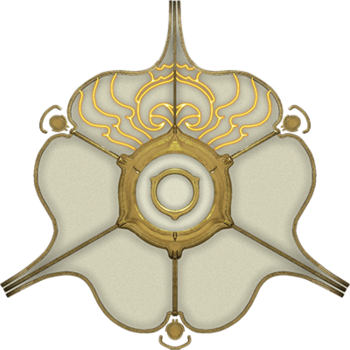 Once, the Origin System was ruled by the Orokin, a race of seemingly immaculate posthuman immortals armed with advanced technology that has yet to be surpassed or even just replicated.

Initially, they were implied to have been a glorious, prosperous society of enlightened ideals and incredibly advanced technology, which collapsed and disappeared after some catastrophe. While not entirely innacurate, learning anything concrete about the Orokin paints a darker picture. They led humanity in what was seemingly a Golden Age, in an era of science, reason, and rampant, incredible cruelty against those they considered their lessers as rulers of the System. Now long-vanished, the only living remnants of them seem to be the guardians of the Orokin structures in the Void: strange towers inhabited and defended by "Corrupted". Corrupted are Grineer and Corpus troops, with the occasional Infested Ancient, who have fallen to the tower's AI defenses and been remade into a loyal servant force.

Their nature reveals a lot of things about them that were not immediately apparent or presumed, so beware of unmarked spoilers below.

General
Margulis
A female Archimedian, she was a brilliant member of the Orokin scientist caste.
Ballas 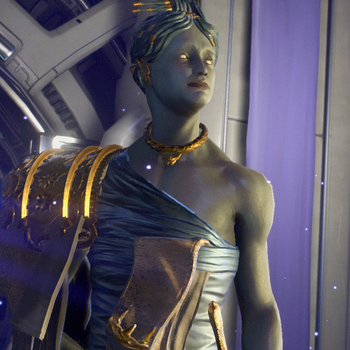 An Executor (a member of the Orokin ruling caste), lover of Margulis, and head of the Warframe Project.

Another Orokin Archimedian, a student of Margulis who served with her on several projects. Her dream was restoring planet Earth from the decayed desert it was in her lifetime. After Margulis' death, she was drafted by Ballas into his research, where she was responsible for the creation of the Titania Warframe. Later she used Transference technology to transfer her consciousness into the Orokin forests of Earth.

The son of the Dax that Excalibur Umbra was derived from. 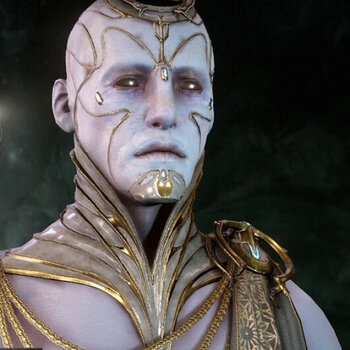 An Orokin-turned-Cephalon judge that survived the Collapse, and the main antagonist of Nightwave Series 3. A serial killer obsessed with Orokin law, who possesses an ancient method of transforming his victim's bodies into a crystalline substance, trapping their souls in "the glass". Nora identifies him as Nihil, the Orokin responsible for the creation of the Cephalons.