One of the three biggest factions in Warframe, and the first enemy faction that the Tenno will encounter.
open/close all folders
Grineer in general 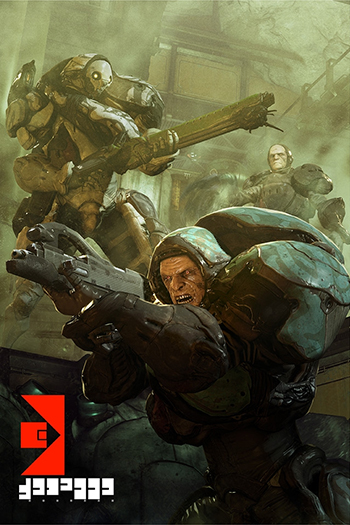 A brutally militarized race of warriors, the imperialistic Grineer depend on cloning for reproduction, and so are slowly dying out due to clone degeneration so severe that they need extensive cybernetics to even function. Motivated by a fascist ideology centered around their own supremacy and loyalty to their Twin Queens, they are determined to destroy the Tenno, the only ones with any hope to stop them.

They rely on their heavy armor, numbers, dakka-spewing rifles, and careful deployment of specialized units such as Heavy Gunners or Shield Bearers to match the Tenno in battle. Due to extensive organ failure and decay from cloning, many of the Grineer are cybernetically augmented to some degree.

According to the codex entries, the Grineer were originally created as miners and workers who eagerly served the Orokin. However, when the Orokin first fought the Infested and later the Sentients, the Grineer were repurposed as soldiers in pure desperation, with the modifications that made them able to fight as soldiers leading to them rebelling. When the Tenno finally defeated the Sentients and turned on the Orokin, the Grineer gained their freedom and became one of the dominant powers in the Origin System in the ensuing power vacuum. 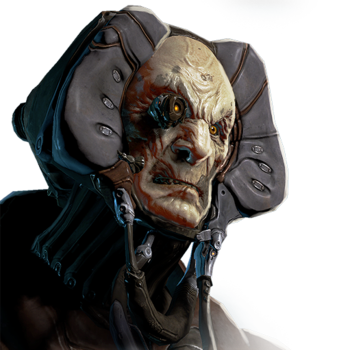 "Another dead Tenno!"
Voiced by: Kol Crosbie
"Foolish Tenno, do you realize your Lotus has sent you to die?"

The first boss of the game, Vor is the Grineer officer tasked by the Queens with locating and exterminating the Tenno before they awake. He is responsible for awakening the player character from stasis in an Orokin structure on Earth, and attaching the Ascaris restraining device on them in an attempt to capture them for experimentation. The player character has to eliminate him in order to disable the Ascaris.

He is faced on Mercury and as a dual boss on Ceres. Initially, the Lotus targeted him due to suspicion of his possessing powerful Orokin artifacts. 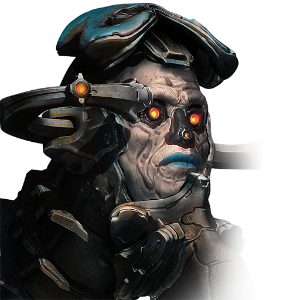 "The first Grineer who brings me the head of a Tenno will be permitted... TO WEAR ITS SKULL AS A HELMET!"
Voiced by: James Atkins
"I knew this day would come. I prepared, changed myself. I made sacrifices! Tenno... are you ready for a SACRIFICE!?"

The boss of Earth. A corrupt diplomat who has assassinated multiple political opponents, Vay Hek serves as the Grineer Propaganda Minister and is behind a number of very dangerous projects, including the Grustrag Three death squad and the growing fleet of Balor Fomorian warships, which he plans to use to conquer the Origin System.

Targeted for assassination by the Lotus as he is a hindrance to the stability of the system. Drops blueprints for Hydroid. 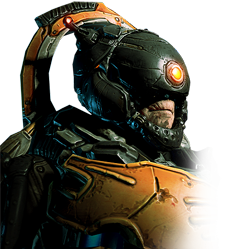 "You Tenno, you fight for treasure. You are just another Corpus machine to me!"
Voiced by: Kol Crosbie
"You think you are guardians? Grineer rule supreme! Grineer protect all!"

The boss of Saturn. Sargas Ruk is the top artifact hunter in of the Grineer, a profession which he uses to feed his addiction to cybernetic augmentation. He is also one of the people responsible for the infamous Gravidus Dilemma, in which he and Alad V went to war over a cache of Tenno found in hibernation on Mars. Drops blueprints for Ember. 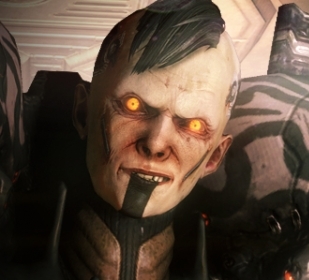 "I'll be back, right after these missiles!"
Voiced by: Cassandra Wladyslava
"This is my show, my audience! I call the shots!"

The boss of Sedna. Kela De Thaym was enlisted for mandatory military service like all other Grineer females, and loved it so much she extended her term for a decade. After an exemplary career she was allowed to act as judge for the Grineer Trial by Combat event, Rathuum. She was targeted by the Lotus on request from the Steel Meridian, in an attempt to rescue a group of Grineer dissidents Kela had captured. Drops blueprints for Saryn.

"Does that second-skin peel away just as easy as the first?"
"And I will strike down upon the Tenno with great vengeance and furious anger!"

The boss of Mars, and half of the dual boss on Ceres. A revered war hero of the Grineer whose augmentations and powers rival those of Warframes. Drops blueprints for Excalibur on Mars, and parts of the Miter, Twin Gremlins and Frost on Ceres. 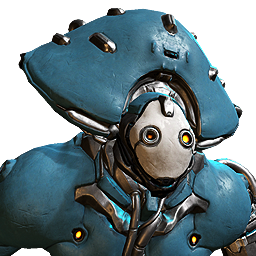 "Come for a fight? Oh, should have dressed for a funeral!"
Voiced by: Lucas Schuneman
"I'm very excited now. The anticipation, ooh! I always learn so much... from a live dissection. ...A dissection? No no no no, that sounds too humane. Your death will be... painful."

The boss of Uranus. A brilliant Grineer scientist who was working to revert the genetic decay of the Grineer, and in the process ended up awakening the Sentient Hunhow from his tomb beneath the seas of Uranus.

Targeted by the Lotus because the research he is conducting not only threatens to make the Grineer immortal, but also give birth to more dangerous clones (such as his Manic Grineer). He fights using Ack and Brunt (formerly a Cronus sword). Did we mention he's completely crazy? Drops blueprints for Equinox. 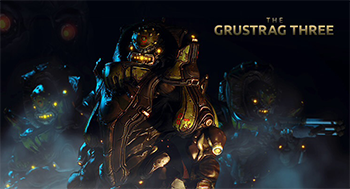 "Are we sure these are the targets? They seem so inconsequential."
"The Grustrag Three. Arrogant. Sadistic. Unstable. They are perfect for this."
— Councilor Vay Hek

Vem Tabook, Shik Tal, and Leekter make up the Grustrag Three, a Grineer Death Squad created by Councilor Vay Hek to punish Tenno who support the Corpus in Invasion missions.

A pair of cloned elite Grineer sisters. Much like the Grustrag Three, they serve Vay Hek.

Fighters picked from all over the Grineer Empire to participate in Rathuum Trial by Combat under Kela De Thaym. Their job is to provide opposition to the accused as well as making their death as entertaining to see as possible. Tenno will have to go through them in Rathuum matches before they can earn their right to fight Kela personally.

Thumpers
Quadrupedal combat vehicles employed by the Grineer in the Plains of Eidolon. They are the field bosses during the daytime, and act as a warmup of sorts for the Eidolons that appear at night.
Kuva Liches 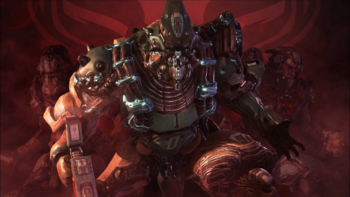 "You are the Queen-chosen, soldier. Greatness awaits you. Greatness... or perhaps death."
"We Maggots live… not long. We hope more life… work… kill… maybe Queens notice… Maybe… they share… the Old Blood. We are maggots. But eventually even maggots can fly."
Grineer soldiers infused with Kuva at the behest of the Worm Queen, giving them a measure of the same immortality she has, and thrown against Tenno deliberately to catalyze the bonding. Those slain by a Warframe, rather than dying, simply teleport away, having imprinted on that specific frame, and elevated into an elite cadre of the Queen's commanders with a personal feud with their original killer. 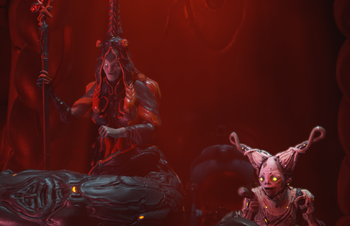 The Witch and The Worm
Voiced by: Tricia Brioux (Elder), Jex Black (Worm)
"Hush, Worm. Let the beasts do their work."
— The Elder Queen
"Relax child, you won't feel a thing. Promise."
— The Worm Queen

The matriarchal rulers of the Grineer Empire. The Sisters hail from the distant past of the Orokin Era. Despite being shunned and reviled and nearly killed from birth for being identical twins (and thus similar to Grineer slaves, very offensive to Orokin sensibilities), they were reluctantly employed by the Orokin to fight against the growing Grineer slave rebellions. Eventually, impressed with the strength they had as a familial pair, more and more Grineer (who were "identical, but not brothers") swore fealty to them until, it is assumed, they had an army under their command, with which they began their empire.

Dr. Tengus
A Grineer scientist who has a tendency for getting involved in experiments of questionable ethics.
Clem 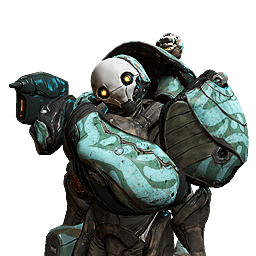 Clem. Grakata.
"He's a special guy, you know. Little weird, but a hell of a fighter."
— Darvo

A rogue Grineer marine who defected from service to the Queens and sided with the Tenno instead. Originally a joke fandom character, he was introduced into a proper canon as a part of a "Man of Few Words" quest.

A faction of rogue Grineer introduced in "The Pacifism Defect" event, who serve as the centerpiece for Defection missions. They're pacifists who are attempting to defect from the Grineer military to live peaceful lives... but unfortunately the Tenno tend to them as the last survivors of ships being overrun by the Infestation, who need to be escorted to safety.

The Wolf of Saturn Six 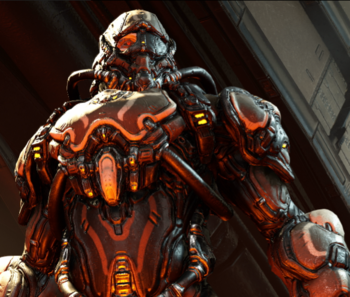 When a wolf finds its pack... they hunt.

A Grineer criminal who used to be a prisoner in an impenetrable Grineer supermax penitentiary located within the gaseous atmosphere of Saturn, the eponymous Saturn Six. Used to be - until he and his "pack" managed to break out and escape into the Origin System.

Wolf acts as the focus of the first Nightwave series. In gameplay he serves as a "field boss" akin to the Stalker, Zanuka Hunter etc., having a chance to randomly appear during missions and attack players. 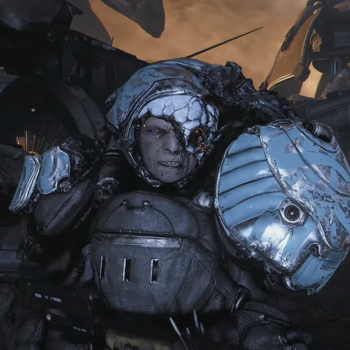 A Grineer lancer on the Plains of Eidolon when The New War begins.

A Grineer squad leader who appears with his squad in the Cambion Drift. He challenges the player to a wager to see who can kill the most Infested.