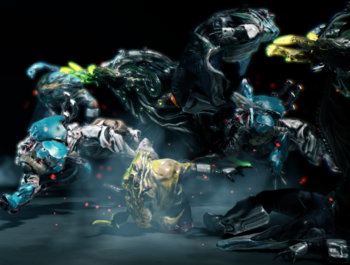 We are countless. Consume us. Be reborn.
"Infestation" describes both a disease and its victims - a metamorphic affliction without cure."
—Lore Entry on the Infestation
Advertisement:

A Hive Mind swarm created by a synthetic disease called the Technocyte Plague, which converts organic material and machinery into deformed monstrosities. The Infested spawn in much greater numbers than other factions, and swarm their enemies with powerful beasts created from the corpses of humans, Grineer, and Corpus personnel, as well as Corpus robots and massive beasts no longer recognizable as whatever they once were.

open/close all folders
General
Advertisement:
The Grey Strain
An advanced strain of Infestation that has totally subsumed Deimos, it acts as the primary type of enemies of the Cambion Drift, while also being present in the native wildlife and fish.
Lephantis 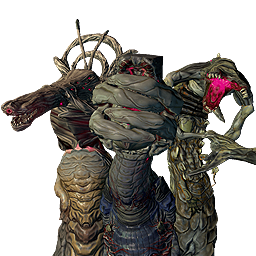 Introduced in Update 10, this is the primary boss of Deimos. Originally intended as a bio-weapon to be deployed by the Orokin to fight the Sentients during the Old War, but then the Infested Turned Against Their Masters and the rest is history. Since then, it's been absorbing and assimilating anything/anyone that stumbled upon it up until it becomes the monstrosity that you have to face in the game proper. Drops parts for Nekros. 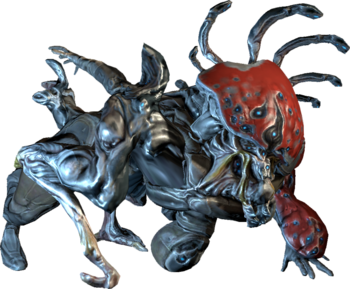 (Revoke the frailties of flesh. Let us in.)
"(We are the vessel through which immortality is achieved. Assimilate, <player name>.)"

The former boss of Eris, now appearing whenever there is an Infestation outbreak in place of the system's usual boss. A gigantic red Infested Charger with several deadly psychic powers. Drops blueprints for Nyx. 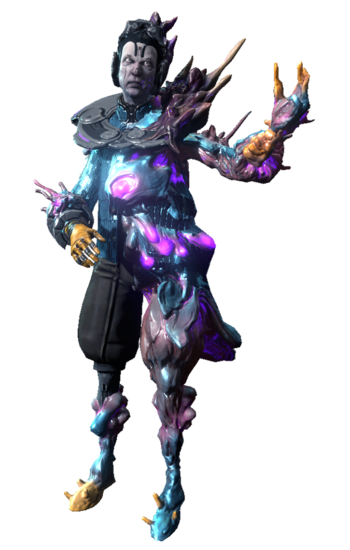 Look at me, Tenno. Don't you want this? Can't you see what a gift this is?
"Inhabitants of the Origin System! It is my singular pleasure to announce that today is the first day of a new empire. An empire populated not by Corpus, not by Grineer and certainly not by the Tenno. No, the Mutalist Empire will be populated by you. A glorious new you, baptized by Mutalist flesh. You’ve called this a disease, an infestation? I call it Unity. One army under me. Welcome to your new species."

On the run from the Corpus for bringing General Sargas Ruk's forces upon them, and the Tenno for his Project Zanuka experiments on their fellow members, the mad scientist Alad V has decided to turn to a different force for power, the Infested, and working on Mutalist technology. Now filled with further delusions of grandeur inspired by the corruption of the Infested hive mind, Alad V cares not for any lines crossed in his pursuit of ruling the stars. Tenno will have to complete the "Patient Zero" quest to find and fight him, putting an end to his mad desires. Drops parts for Mesa. 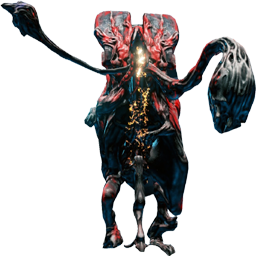 You have no idea what I am. JOIN US, AND YOU WILL.

Hello? Is this real? Did someone get my message? I hope not.
"I never wanted this! I wanted to be somewhere else! - TASTE SOMEONE ELSE!"
—Cephalon Jordas + The Infested Hive Mind

A Corpus frigate taken over by the Infestation. Originally controlled by a Cephalon named Jordas, who watched helplessly as the vessel and parts of his psyche were assimilated. Fought as the boss of Eris, and drops parts for Atlas. It turns out the Jordas Golem attacking Eris was a clone, and the fully-realized J3 Jordas Golem is creeping outside the Outer Terminus near Pluto.

Bloated Infested quadrupeds, juggernauts act as guardians for Infested broods, and are only roused by the slaughter of their kind. A stronger variation, the Juggernaut Behemoth, guards access to the Jordas Golem.

Arlo and his devotees

Arlo is a seemingly human child who lives in the orbit of Eris, surrounded by teeming Infestation and even appearing to have some control over it. He and his devotees served as a focus for the Nightwave Series 2, and his Zealoid Prelate serves as a secondary boss for Deimos.