Characters who don't fit into any of the other factions or groups listed. 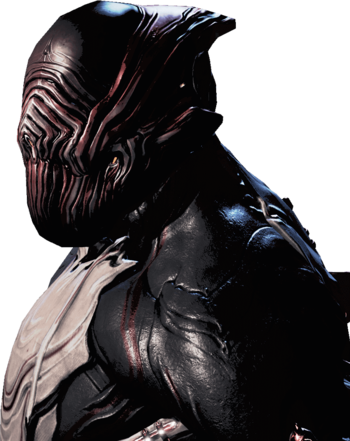 I am your reckoning!
"You can't run from your past."

A mysterious assassin in black and crimson armor who invades the missions of Tenno after they have killed at least one boss, no matter how bizarre or hateful they are, with the stated aim of avenging said boss and punishing the killer. From his appearance and weapons, it's speculated but has not been explicitly confirmed that he might be a rogue Tenno. 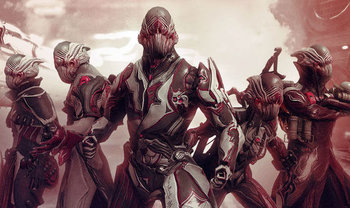 A team of hostile beings who have, for whatever reason, thrown their lot in with the Stalker. Possessing Tenno-like powers of their own and copies of the Stalker's helmet, they stalk the Origin system for goals unknown. Well, two goals are pretty well established: killing Alad V, and fighting the Tenno.
Baro Ki'Teer 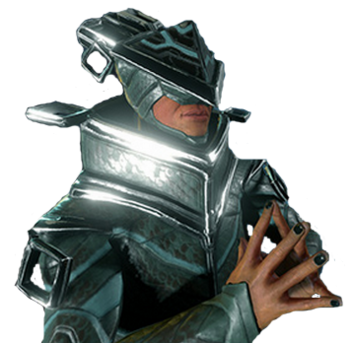 Why, hello.
"The wait is over, Tenno! Baro Ki'Teer has arrived!"

Also known as the "Void Trader," Baro Ki'Teer is a merchant who periodically appears in the various Tenno-controlled Relays around the Origin System, trading in the various Prime components that can be looted from the Void and Orokin Derelicts. He offers extremely rare items from the Void that can't be found anywhere else, assuming Tenno are willing to pay his prices. 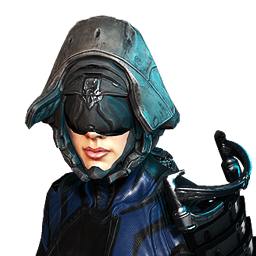 I don't take orders from anybody! Stay the hell back, you Tin-Suits!
"I'm not playing around, and I ain't got no business with a Tenno!"

A female freelance thief always on the look for more treasures to steal. She first came into Tenno attention during the Stolen Dreams quest, where Tenno had to seek her out to learn the location of the Arcane Codices she'd stolen. She is also encountered during the Project Undermine event, and recently she managed to take over an abandoned Tenno relay that she uses as a sort of free trading zone.

Mitsuki
A young girl from a remote Ostron settlement that was ravaged by the Grineer, she becomes involved in Vor's search for the Orokin artifacts and the Tenno trying to oppose him. She only appears in a tie-in comic for Warframe, where she serves as one of the two POV-characters and is arguably the comic's protagonist.
The Man in the Wall
"Hey kiddo."

A mysterious entity that may be the embodiment of the Void which reaches out to those it touches, or a psychotic delusion of the Tenno given life by their powers. 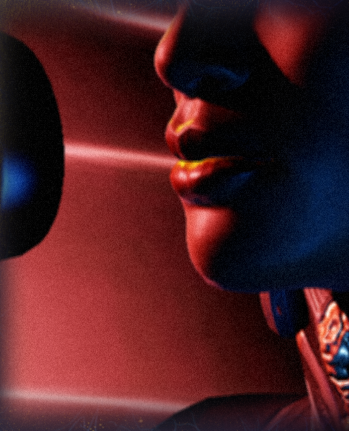 "Hey there, Dreamers. You hearin' me? I know you are. No need to say anythin'. A hand in yours, a voice for the speechless, a bedtime story for the sleepless. The name's Nora Night, and I got somethin' to say, sweet things. Nightwave is coming."

An anonymous woman putting out a radio broadcast to the system. She runs Nightwave, the reward system that replaced alerts in update 24.3.0. She first appeared after Hotfix 24.2.15.

Drusus Leverian
The mysterious curator of the museum known as the Leverian.