Comic Book / The Punisher
aka: Punisher 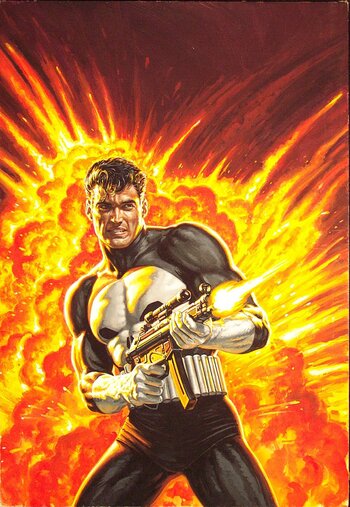 They killed my wife and my baby
With hopes to enslave me
First mistake
Last mistake
— Megadeth, 'Holy Wars...The Punishment Due'
Advertisement:

The Scourge of the Underworld. The Little Hunter. Mr. UnSmiley. The Skull Faced Guy. The Marvel Universe's Grim Anti-Hero.

The Sociopathic Hero. The Darker and Edgier Hero. The Vigilante Man.

The Punisher is one of Marvel's most reliable cash cows, a self-made Judge, Jury, and Executioner whose only passion is finding and executing criminals in the most brutal (and sometimes imaginative) ways possible. The Punisher first appeared in Amazing Spider-Man #129 (February, 1974), created by writer Gerry Conway, along with artists John Romita, Sr. and Ross Andru.

For a while, the Punisher appeared mostly in titles starring Spider-Man (see The Clone Saga). He received his first origin story in Marvel Preview #2 (April, 1975), again written by Conway. He received another solo story in Marvel Super Action #1 (January, 1976), a one-shot publication. After that Punisher returned to making appearances in titles featuring Spider-Man, Captain America, and Daredevil. In the 1980s, Steven Grant and Mike Zeck campaigned for a Punisher mini-series. But Marvel editors were reportedly reluctant. The series eventually did materialize: Punisher vol. 1 (January-May, 1986). It sold well and consequently Punisher gained his first ongoing series in 1987. The Punisher has since starred in various magazines over the years, even gaining four multi-part events that ran through various titles in the nineties, said events being Suicide Run, Countdown, and Over the Edge.

Frank Castle is a veteran (originally The Vietnam War, though History of the Marvel Universe retconned this to Siancong in 2019) who saw his wife, son and daughter slaughtered in a Mafia hit gone wrong. So he got himself a black shirt with a scary white skull on the front and a whole lot of guns, and started a one-man war on crime.

The big difference between him and, say, Batman? Castle kills the criminals that he fights. A lot. Often several dozen at a time.note His confirmed "high scores" to date are approximately 2,000 in the Marvel Universe with a nuke, and 68 in one night, with 32 in a single location in the MAX continuity. Wizard magazine also had his death count as slightly above 1,000, pre-Ennis and later in MAX, this is mentioned to have climbed to 2K. Combine all that together, and the total death toll comes around to an astounding four thousand bad guys. He uses machine guns, explosives, a certain amount of martial arts, knives, and on occasion, wildlife (most notably, the time that he punched a polar bear in the face to get it riled enough to eat some Mafia hitmen). He can be very, very sadistic. He tends not to get along with Marvel's actual superheroes, especially when he's written by comic-book scribe Garth Ennis; many fans think Castle and Ennis were a match made in heaven.

The tone of the stories vary from violent pitch-black comedy to intensively grim-and-gritty noir tales to attempts to make him a full-on Super Hero... who just so happens to kill people. His enemies have ranged from sex slavery rings to gigantic Russian hitmen augmented with cyborg body parts and enormous breasts... both of them written by Ennis.

Over the years, there have been attempts to reinvent the character in a different style. At one point he was killed and revived as a supernatural hero empowered by angels. Another storyline made him 'Franken-castle', a reanimated corpse surrounded by monsters. A third gave him a version of the Iron Man 'War Machine' armour. Each time, he’s been returned to the status quo. The Punisher (2022) series by Jason Aaron also touches on this sort of change, and sees Castle becoming an assassin with the supernatural ninja clan the Hand, replacing his iconic skull symbol with a horned demonic version.

There are two notably different Punisher series: the main Marvel Universe series and a second series created for Marvel's adults-only MAX imprint (originally titled The Punisher and referred to as Punisher MAX, before changing to The Punisher: Frank Castle and then PunisherMAX). This latter version, written almost exclusively by Garth Ennis for four years, features no superheroes and is deeply rooted in "mundane" crime — The Mafia, Irish terrorist cells, Eastern European sex slavers, gangsters and real-life wars are prominent. It is also considerably less funny than the mainstream Marvel series, though there are touches of black humor here and there. The MAX series is written much more consistently than the mainstream version, due to being almost entirely shaped by Garth Ennis' vision of the character; this series is also notorious for its moral absolutism. The Marvel Universe version may be willing to excuse himself for killing a friend's girlfriend while under the influence of a "hate ray", but the first post-Ennis MAX issue sees Frank on the edge of killing himself after believing that his instinctive shooting had led to an innocent girl's death, declaring to himself that "I must be punished."note Realizing the possibility of a setup is the only thing that lets him live long enough to exhume the body, which he finds was slain with a bullet of a different caliber from what he had been carrying. Turned out that it was a setup to get him out of the way of a local crime syndicate.

An Alternate Universe version is a major character in the Spider-Gwen books, where he's portrayed as being somewhat less stable than the mainstream version.

Three films have been based around the character have been produced to date —- one by Artisan Entertainment, with Dolph Lundgren in the role, and two others by Lionsgate: The Punisher and Punisher: War Zone. All three films are standalone and aren't linked by any continuity.

When his film rights reverted back to Marvel in the early 2010s, many wondered if The Punisher ever officially join the Marvel Cinematic Universe. Outside of a reference in All Hail the King, there weren't any immediate plans to reintroduce the character. In June 2015, it was announced that The Punisher would make his MCU debut during the second season of Daredevil, played by Jon Bernthal. After months of speculation following the release of Daredevil, it was later confirmed that The Punisher would later spinoff into his own series. It lasted for two seasons, and was cancelled along with all Netflix series of Marvel characters as a result of conflicts between the studios.

The Punisher provides examples of the following tropes:

"You know you're just one bad day away from being me..."