As a game about secrets where everyone has a hidden agenda, there are naturally loads of spoilers beyond this point. Take care.

"I never asked for this."
Voice: Elias Toufexis

The protagonist of the game. He's a former SWAT police officer turned security specialist hired by Sarif Industries to handle any threats the company might face. He was an ordinary human until a surprise attack from unknown forces left him a mauled mess, which forced Sarif Industries to augment his body. The game revolves around Jensen's attempts to find answers to why Sarif was attacked and how Megan is connected to all of this. 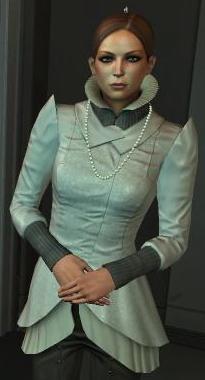 Adam's ex-girlfriend, and one of the senior scientists at Sarif Industries, who makes an important discovery regarding augmentation. 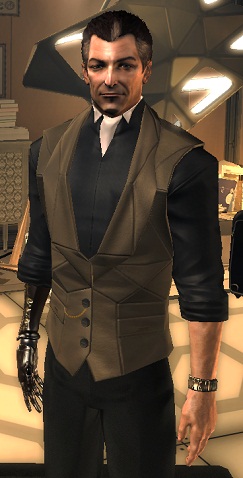 He is the founder and CEO of Sarif Industries. He pushes augmentation so much that he gets upset if Adam does not buy a Praxis kit from a LIMB clinic as soon as possible. 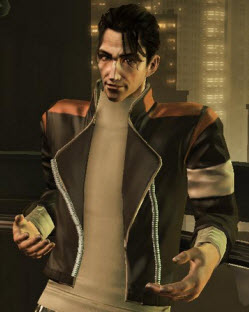 Head of Sarif Industries' IT department. His computer skills make him a highly valued employee, but his adversarial attitude towards his coworkers hasn't won him many friends among them.

An old friend of David Sarif, as well as his Executive Assistant. She is fiercely loyal to him, having worked for Sarif Industries since its founding. 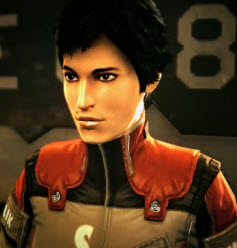 The pilot of Sarif Industries VTOL aircraft. She flies Sarif, Adam, and other company personnel wherever they need to go, and provides Adam with overwatch on some of his missions. She lived in Hengsha for a few years and has personal connections there. 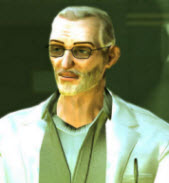 A older scientist who works for Megan. Out of the surviving kidnapped scientists, he is the most loyal to Sarif Industries. 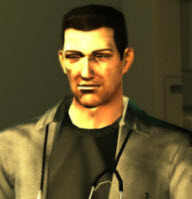 Another member of Megan's science team. He has an idea about what might be wrong with Faherty's work and suggests that a new cytometer will solve that problem... which will come with a free cappuccino maker. His loyalty is somewhere in between Nia and Declan; while he is far from happy to be at Omega Ranch, he lacks the courage to truly rebel. 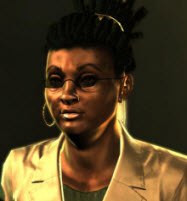 She is first seen berating a worker for dropping boxes that are worth more than his salary. She is the second-least-loyal scientist behind Megan, and adapted quite well to her new job at Omega Ranch. 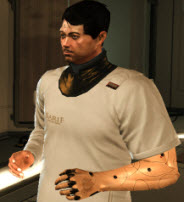 This Sarif Industries scientist is heavily involved with the Typhoon project. Out of all the kidnapped scientists, he was the most loyal to Sarif. Though it didn't save him, he did lay the groundwork for an escape plan that Adam can build upon.

A Sarif Industries lab tech who seeks out Adam's help with a personal problem: He's being blackmailed by a former Sarif employee into stealing neuropozyne from the labs, and hopes Adam will be kind enough to bail him out.

A former Sarif Industries cyber-security tech who was fired after Pritchard caught him tampering with security footage showing Tim Carella stealing neuropozyne from the labs, so that Tindall could give it away to poor augmented people free of charge. He uses the footage he edited out of the recording to blackmail Carella into continuing the thefts even when he wants out. Some chat logs and pocket secretaries confirm that Tindall wasn't entirely lying, but there's also an email in Double-T's computer talking about him supplying the Motor City Bangers with neuropozyne. He also tries to have Jensen kill/disable a couple of rival drug dealers.

The Tyrants in general 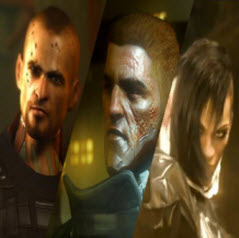 The Tyrants are a group of elite black ops augumented soldiers employed by the conspiracy in charge of furthering its aims by any means necessary. In the game, they are referred to as a special operations division of Belltower. 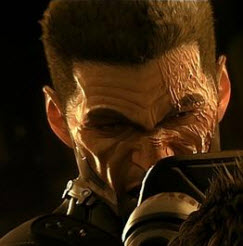 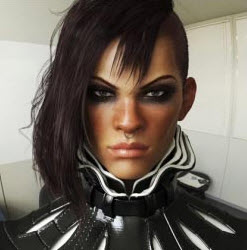 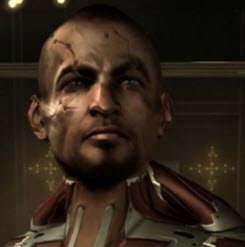 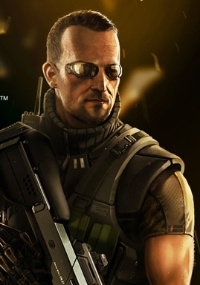 One of the deutagonists of Deus Ex: Icarus Effect and the protagonist in Deus Ex: The Fall. A former SAS trooper and Belltower mercenary, Saxon is recruited into the Tyrants by Jaron Namir after his squad are killed in action due to compromised intelligence. Although initially loyal to Namir, Saxon eventually begins to question the Tyrants' true objectives and the masters they serve. With the help of the enigmatic Janus, Saxon uncovers that the Tyrants were responsible for the deaths of his squadmates, prompting him to switch sides.

The heart and mind of Panchaea, a CPU capable of running the calculations necessary to keep the installation from being torn apart by its own weight, ocean currents, or the cold. It is — or, to be more precise, they are — the work of Hugh Darrow. The purpose Hyron was built for is not the only thing it can do, however... 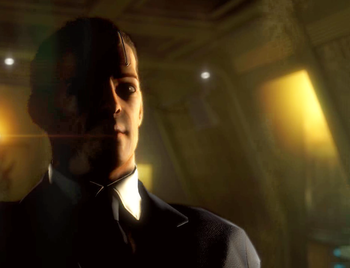 One of the few known returning characters from the original Deus Ex; he appears in the opening scene of the intro, although not by name. Also see his entry on the Characters page for the first game. He is currently the CEO of Versalife.

Belltower is an umbrella group of private military contractors who provide a maximum spectrum private military/security solution. The Conspiracy go to them regularly as one of their many arms of enforcement. Their special operation forces are under command of the Tyrants (and Pieter Burke in The Missing Link) and were complicit in the kidnapping of Megan and her team. 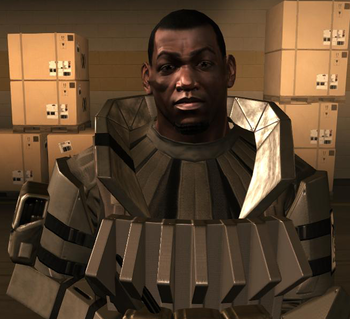 Commander of Belltower operations in Hengsha and Zhao Yun Ru's direct subordinate. Seems to have little to no regard for collateral damage resulting from the carrying out of his tasks. 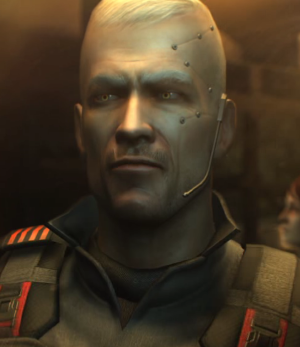 Appearing in The Missing Link DLC as it's primary antagonist, Pieter Burke is the commander of Belltower's special ops group. He's currently positioned on Rifleman Bank Station, ostensibly an offshore oil rig owned by Belltower to incarcerate criminal dissidents. In reality, the people incarcerated at the station are just swiped off the streets indiscriminately for use in the Hyron Project, which Burke is in direct command of. 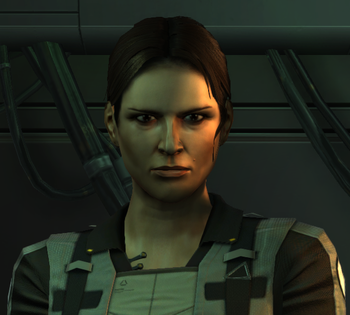 Also appearing in The Missing Link, Keitner is Burke's second in command and the director of operations at Rifleman Bank Station. She's really working with Interpol (or so she believes) to bring evidence of Belltower's corruption to light. 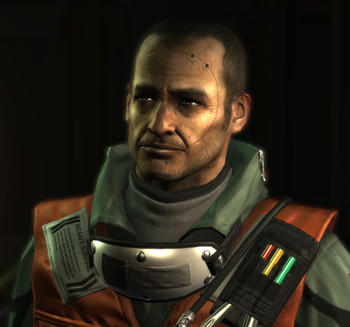 Also from The Missing Link, Quinn is the main technician at Rifleman Bank Station, and also runs a little side operation for 'requisitions'. 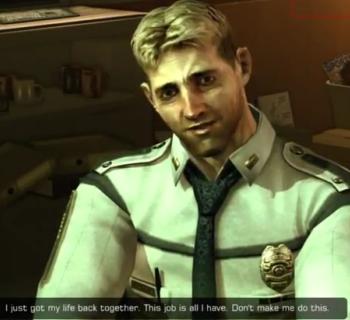 Formerly one of Jensen's SWAT team subordinates, he took up the post of team leader after the former quit over the Mexicantown Incident. That same event however, would lead to Haas's mental breakdown and his subsequent demotion to a precinct desk sergeant.

A friend of Adam's from his first four years on the Detroit Police force. Currently working undercover as a prostitute just outside of Derelict Row. 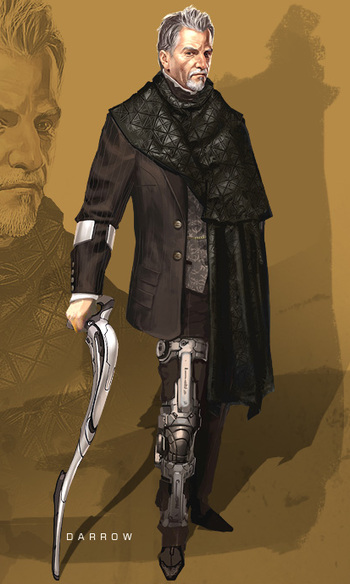 A billionaire Nobel Prize winner and a close friend of David Sarif. Considered the "father" of augmentations technology. He is currently working on a project named "Panchaea," a massive hole in the ocean that is supposed to change global warming, and has other geoengineering projects planned. Picus tries to give somewhat favorable coverage of this project (presumably due to Picus having been founded by Hugh's father). He plans to show the world what augmentation can do for humanity...

One of Darrow's representatives, involved in the Panchaea project.

She works at the L.I.M.B. clinic in Detroit. Unlike David Sarif, she believes that Adam should have more choice regarding the progress of his augmentations. 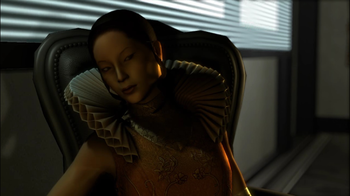 The CEO of Tai Yong Medical, a Chinese bio-tech company seeking to become the world leader in the augmentation market and a direct competitor to Sarif Industries. She warns Adam about "these men" who "control global interests on a whim," mysteriously neglecting her own involvement in said global interests. 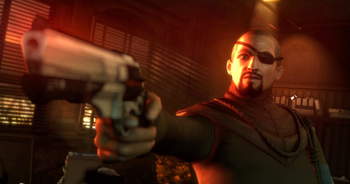 Leader of the Purity First militant organization, best-known for leading an attack on Sarif Industries at their Milwaukee Junction manufacturing plant. He has some unexpected familial connections that only become apparent much later. 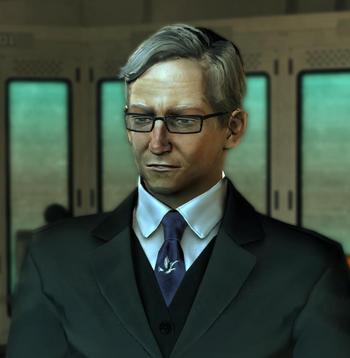 The founder of Humanity Front and the leader of the anti-augmentation movement, claiming it is a dangerous technology with unclear means of regulation that the world is not ready for until it can be safely controlled. This turns out to be more or less his true motive. The real secret is where he thinks the control of augmentation and augmented individuals should lie... 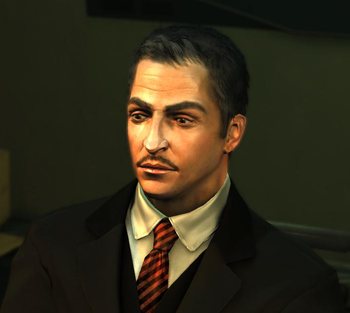 A former surgeon and currently Taggart's right-hand man. He is opposed to augmentation because of the effects he observed on his patients in the past.

Detroit's largest street gang, they are rabidly anti-augmentation and control an area surrounding an abandoned textile plant in downtown Detroit.

Detroit's second-largest street gang. Not as large as the DRB, but they make up for it by embracing augmentations to make each individual member more formidable.

This vicious triad from Hengsha is so-named because they attack augmented people in order to steal their implants, which they then sell on the black market or install in themselves. 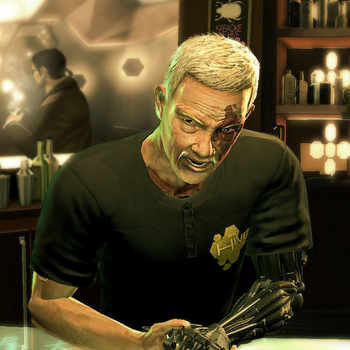 The owner of the popular Hengsha nightclub, The Hive, as well as the biggest crime lord in the city's underworld. Later revealed to be the father of Tracer Tong from the original game.

The main bartender of the Hive, who also helps to run the shadier side of Tong's business. 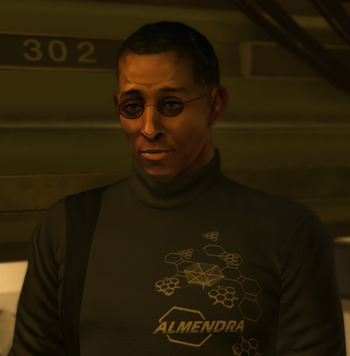 The hacker who was puppeting the infiltrator during the second attack on Sarif Industries, he uses the screen-name "Windmill" and is also called the "Dutchman" even though his accent is more Caribbean. note Of course, there are the islands of Curacao, Bonaire, and Aruba, all part of the Kingdom of the Netherlands. And that's not even counting the possibility that he could hail from Suriname.

An aged private investigator who used to be a detective. He was hired by David Sarif to do a background check on Adam Jensen. Unfortunately, his investigation attracted some very pointed attention.

Megan's mother, and dissatisfied with the investigation into her death.

The ex-boyfriend of one of Malik's deceased friends. He was the one who killed her, and Malik wants Adam's help proving it. 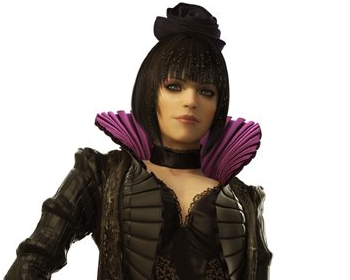 "This is Eliza Cassan, reporting to you live, from Picus."
Voice: Kim Bubbs

The global celebrity Picus TV Network newsreader, who tirelessly reads news at seemingly all times. She makes appearances as a holographic presence when unable to appear in person. Eventually Adam meets her and discovers "in person" is a relative term...

"I'm game if you are, but equally, it might be nice to take a little break from murder and mayhem and maybe stop off somewhere for cocktails."

A heavily-augmented freelance mercenary from the six-issue comic run.

This abrasive, foul-mouthed commentator tirelessly talks on his radio show at all times. He comments on practically everything, but mainly focuses on conspiracy theories and the politics surrounding augmentation. He starts out as fiercely anti-aug, but switches sides when he finds out who's controlling the opposition movement.

One of Adam's street informants back when he was a cop, this woman sifts through trash in order to find food. Her favorite drink is Maharaja Hot Devil beer.

A former nurse at the White Helix Labs, she saved Adam's life when he was a baby when a fire destroyed the lab where he was raised at.