Characters from Deus Ex: Mankind Divided. For characters who originated in previous games in the series, check the following pages:

An antiterrorist group formed by Interpol after an increasing amount of Aug related terrorist attacks worldwide. Adam joined them in the two years following the Aug Incident.

"I once thought I could save the world. Now look at it."
Voice: Elias Toufexis (English)note Other Languages:Artyom Kretov (Russian)

The former chief of security at Sarif Industries. Adam is now working for Task Force 29. For tropes relating to Adam in Human Revolution, see this page.

"Agent Jensen. Am I going to have a problem with you?"
Voice: Vernon Wells (English)note Other Languages:Vladimir Antonik (Russian) 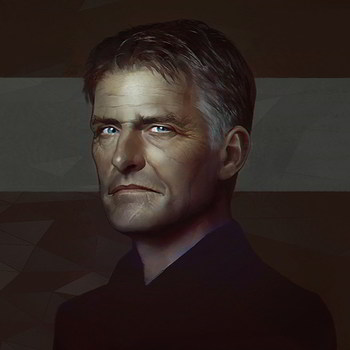 Director of Task Force 29's Prague branch and Adam's superior. He is a gay man with a family that he is currently splitting from. Adam isn't sure whether he's an Illuminati pawn or not. Miller's tough and somewhat vitriolic attitude towards Adam leads to some difficulties for the new TF 29 agent. 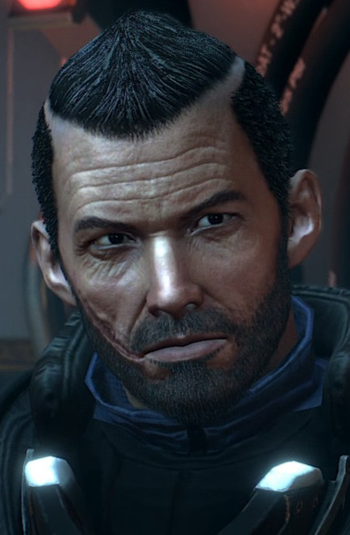 A squad leader in Task Force 29. MacReady makes no secret of his distrust of augs. He is Adam's superior but Miller tends to go over his head to give Adam's authority instead. 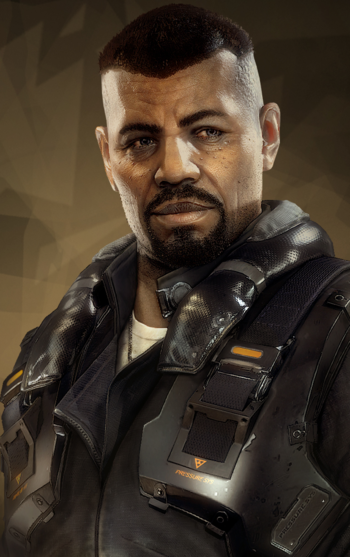 The VTOL pilot for Task Force 29. Chikane has military experience and distrusts augmentation technology after suffering a severe knee injury at the hands of an Augmented person during the Aug Incident.

Director of Task Force 29 and Miller's superior. He is deeply connected with the conspiracy and tries to stop Task Force 29 members from getting too close to the truth.

An undercover operative for Task Force 29. He is in serious risk during the mission Adam and Task Force 29 attend to in Dubai.

The former hacker and currently member of Task Force 29's cybercrimes division. He is a nervous, paranoid, and unhealthy man with a long criminal past and a rocky relationship with Interpol.

"Understanding when to pull that trigger is the single most important instinct an agent can possess"
Voice: Mylène Dinh-Robic (English)note Other Languages:Irina Kireeva (Russian) 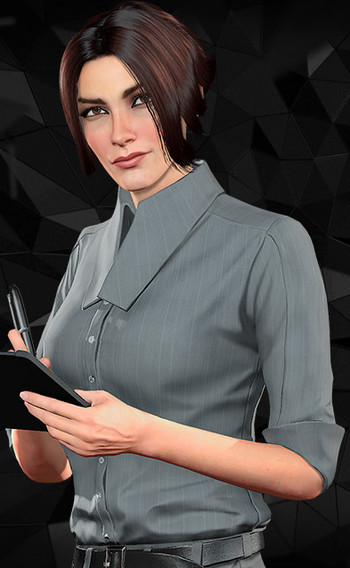 A Paris-born resident psychiatrist for Task Force 29. She is there to determine Adam and other agents' fitness for duty.

An augmented member of Task Force 29. Aria has been relegated to managing TF29's firing range because the Taskforce is reluctant to make her a field agent due to her augmented arm.

In General
An Augmented rights group that opposes the segregation of Augmented people. While ARC does not rely on violence, many of its members have gone rogue and committed acts of terrorism. As such, ARC has been placed on the terrorist watch list.
Talos Rucker

"The Augmented are suffering a genocide. It begins with demonizing us, treating us as less than human, exiling us so we are forgotten, and then exterminating us!"
Voice: Alex Ivanovici (English)note Other Languages:Andrey Sokolov (Russian)

The leader of ARC. A former humanitarian medical doctor who suffered severe injuries in a volcanic eruption that also claimed his wife's life. Task Force 29 orders Adam to abduct Rucker for his suspected involvement in a terrorist attack in Prague.

"We are human beings... each and every one of us. This must not go on. This injustice... must END!"
Voice: James A. Woods (English)note Other Languages:Anton Morozov (Russian)

A high ranking member of ARC. He is heavily augmented and a skilled combatant. He becomes leader of ARC after Rucker is killed.

A member of ARC who suicide bombs Ruzicka Station at the start of the game.

In General
A mysterious organization that Adam has been passing information to.
Janus

The mysterious leader of the Juggernaut Collective.

Adam's contact at the Juggernaut Collective. She is a former Belltower employee who is concerned about the plight of her fellow Augmented. She previously appeared in the spinoff The Fall.

In General
An organization that has been secretly manipulating the world from the shadows.
Bob Page

CEO of Page Industries and owner of VersaLife. He is one of the Illumimati's Council of Five.

The leader of the Illuminati. He has been the richest man in the world for years and has guided most of humanity's recent history.

CEO of Picus Media. He is also one of the Council of Five.

The leader of the World Health Organization. She is a close ally of Lucius DeBeers.

Another member of the Illuminati Council.

Another member of the Illuminati Council.

A scientist who may have something to do with Adam's new mystery augs. Apparently he's quite unpleasant. Not that you'd know personally. Or would you?

An Illuminati agent sent to Prague in order to monitor Alex Vega. She works in conjunction with the "Watcher" who is observing Adam Jensen.

In General
A long established Georgian crime family based in Prague. The Dvalis control most of the city's smuggling and drug dealing operations.
Radich Nikoladze

The current leader of the Dvali family.

The second-in-command of the Dvali family, Otar is a proud, traditional man who is currently at odds with Radich over the organization's current direction.

A back-alley doctor specialization in augmentations. He helps Adam with any augmentation problem since in the aftermath of the Aug Incident, legal medical services for Augs is hard to come by. He has ties to the Dvalis, but has had a falling out with Otar.

A smuggler who works for the Dvali transporting their merchandise out of Prague.

Vlasta's wife who was working with Vincent Black to escape her husband and leave Prague.

In General
An underground news publication that seeks to spread the news that gets covered up by corrupt governments and corporations and expose the truth about various conspiracies they come across. Unfortunately, with Picus having an iron grip on mainstream news and their own...unique way of writing its been an uphill battle for them to stay relevant.
K (Jared Drobny)

The official leader of Samizdat who has been spying on task force 29 and knows that their store is a front for some sort of secret organization. He agrees to back off in exchange for Adam's helping securing a secret Picus news document from a heavily guarded bank vault.

An older woman who came to Prague after being forced to relocate due to safety reasons. She writes most of Samizdat's articles which can be read on many of their publications which are scattered throughout the game.

The third and final member of Samizdat. Not much is known about him and he doesn't talk very much.

The Regional Director of Document Checking for the Office of Permitification in Prague, Drahomir is a cruel, racist, shortsighted bully of a policeman who — just kidding, he's not a cop at all, just an extortionist with a stolen police uniform. Drahomir is one of the first antagonists you face in Prague, a manipulative, scheming Con Man who operates a fake checkpoint for the purpose of bleeding augs dry until they're eventually sent to Utulek. Thankfully, you can make sure he gets comeuppance.

The detective in charge of investigating the Harvester murders in Prague. Adam meets him upon finding an augmented reporter named Angela Gunn murdered just outside his apartment. Notable for being one of only a few police officers in Prague that doesn't treat augs like the scum of the earth.

A local Sleazy Politician — or at least, sleazy aspiring politician — who's running for Head Secretary of Prague. He's very racist against augs.

The Harvester was a serial killer who murdered several Augs by pulling their augmentations out of their bodies. While the Harvester has since been executed, someone has been killing Augs in the same manner.

"Mother" of the Church of The Machine God and Nomad Stanek's daughter. She was a former EOD (Explosive Ordinance Disposal) specialist in the Czech military and is the one responsible for supplying the bombs that destroyed the train station at the beginning of the game. Unfortunately, her cult is on the eve of a planned "ascension" from the psychical realm so that they may become one with their god...and choosing to save her means passing up a chance at hitting a Versalife bank vault that contains the cure to the Orchid.

Allison's father who owns a watch shop Adam regularly visits. At first he was suspected of being the one behind the bombing at the train station when Adam found a secret room in his apartment with evidence pointing to him as the culprit. In actuality, it was his daughter Allison who was responsible for making the bombs.

Lieutenant Whittaker is the head of the Tarvos security team and main antagonist of the Desperate Measures DLC.

A Ripper (or neural-subnet hacker) operating out of Prague, trying to break into the Palisade Bank's Blade server. She first appears as the Mission Control for the Breach side-game, but Adam meets her in person during the System Rift DLC mission.
Frank Pritchard

Adam's coworker from his days working at Sarif back in Detroit. Frank's in a bit of a bind and needs Jensen's help breaking into one of the most secure locations in all of Prague. For tropes relating to Frank in Human Revolution see here.

A Criminal Past DLC

Hector Guerrero is an agent of Interpol who by 2029 has been working alone and undercover for two years. He is described as a formidable, highly intelligent improviser and polyglot.
Thomas P. Stenger

The chief guard of the Penthouse and a corrupt official involved in a Harvester scheme. He is secretly working for a criminal organization known as the Junkyard.
Frederick Flossy

A friendly prisoner who helps Adam acclimate to the new environment. He's also the mastermind of a prison riot.
Peter Wörthmüeller a.k.a. "The Fixer"

Peter Wörthmüeller a.k.a. "The Fixer"

A highly intelligent inmate who is employed by the prison as well as the prisoners for his medical expertise. He is a quiet, nervous, and apparently mentally ill middle-aged man.
Danny "Red Shoes" Brewer

An associate of Flossy and one of the key perpetrators in the riot.
Theodore "D-Town" Zenga

An augmented criminal that Adam arrested back in Detroit for sleeping with underage prostitutes who has now found himself locked up in the Pent House. He recognizes his old foe instantly upon arrival and still holds a grudge for what happened in their past.

A news anchor at Picus TV. Eliza is secretly an AI developed by the Illuminati to control the distribution of news, although she doesn't necessarily share her creators' goals. For tropes relating to Eliza in Human Revolution, see this page.

The CEO of Sarif Industries, one of the world's leading augmentation firms and the former employer of Adam. For tropes relating to David in Human Revolution, see this page.

The CEO of the Santeau Group, a company that specializes in building cities designed by Augs for Augs. Although Brown publicly supports Aug rights and opposes the Human Restoration Act, the Act would require all Augs who lack appropriate documentation to live in Aug only cities like the ones Santeau designs...

A mysterious person who contacts Adam in Prague. In reality, she is some sort of a merge between the real Eliza Cassan AI and the Hyron Drones.