Due to the nature of Deus Ex and wiki policy on spoiler tags, parts of this article contain major unmarked spoilers regarding the game's plot twists and reveals. You Have Been Warned. 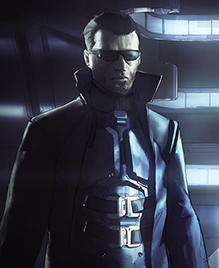 His vision is augmented.

"This is why I exist? All right, let's do this."
Voice: Jay Anthony Franke

The player character and main protagonist of the game, an augmented agent of UNATCO tasked with defeating the NSF, only to find out that the situation is considerably more complicated than it seems...

The United Nations Anti-Terrorist Coalition is an organization that operates off Liberty Island and hunts terrorists with seemingly unlimited authority.

"This isn't a training exercise, JC. Your targets will be human beings. Keep that in mind."
Voice: Jay Anthony Franke

"I do not expect you to perform as well as Agent Hermann, but the mission will require us to do more than frighten the NSF with our baggy coats that make us look bigger than we really are."
Voice: Carolyin McCormick

"I wanted orange. It gave me lemon-lime."
Voice: Jeff Groteboer

"Some say concentrated power leads to abuse, but I believe that if an institution has a solid foundation, it can survive the narrow aspirations of the people it employs."
Voice: Sean Hennigan

The Quartermaster for UNATCO and a former general.

"So far I feel more like a mechanic than a doctor."
Voice: Sean Hennigan

UNATCO's doctor and the one in charge of nanotechnology-related matters.

"You're certainly quicker on the uptake than your brother Paul ever was."
Voice: Richard Zangrande Gaubert

A helicopter pilot who works for UNATCO and later defects along with you.

"We take care of our people around here."
Voice: John Gault

The National Secessionist Forces, or NSF are a constitutionalist insurrectionary organisation classified as a terrorist group by UNATCO in the United States.

"It's all in the numbers. For a hundred years, there's been a conspiracy of plutocrats against ordinary people."
Voice: Marcus M. Mauldin

"Next thing is, I explain it 'lo bruto'. Is that what you want?"
Voice: Khary Payton

A crime boss of New York who threatens to do things "lo bruto" when he doesn't get what he wants.

"The question you've got to ask — I'm surprised you haven't — is the obvious one: Who am I? Who made me and for what purpose?"
Voice: Sean Henningan

An NSF supporter and the mastermind behind the operation of capturing the Ambrosia vaccine.

"Let's get out of here."
Voice: Gary Moody

An NSF terrorist, who is held prisoner in Majestic-12's underground facility. Accompanies JC if you get him out of his cell.

An offshoot branch of the Illuminati that has gone on to become the most powerful organization in the world. It is controlled by Bob Page and exerts a massive amount of influence worldwide.

"Why contain it? Let it spill over into the schools and churches, let the bodies pile up on the streets. In the end, they'll beg us to save them."
Voice: Cliff Stephens

The richest man in the world, head of Page Industries, and a (former) member of the Illuminati. He is the head of Majestic-12.

"I'm the more advanced model, Denton. It's time for you to retire."
Voice: Tom Hall

The head of FEMA and Page's right-hand man.

"Mr. JC Denton, in the flesh. As dark and serious as his brother."
Voice: Carolyn McCormick

The main antagonist of the Hong Kong area. A former actress and current business executive who is in league with Bob Page.

A high-ranking member of Majestic 12 JC Denton encounters in Vandenberg. He attempts to disarm the missile launch towards Area 51.

An organization that has supposedly been controlling the world for centuries but may just be an invention of the last few decades according to Deus Ex: Human Revolution. The Illuminati used to control the world from behind-the-scenes but the destruction of the Knights Templars followed by the break-away of Majestic-12 has ruined them.

Currently the most influential of the remaining Illuminati, and is Page's former mentor.

"Starting to think like us, huh? Be careful. Paranoia's a drug; you can get addicted."
Voice: Randy Tallman

A former member of the Council of Five who led the Illuminati.

"I AM THE LEADER! I brought the Illuminati up through the 20th century to the height of their power! I had presidents and premiers eating out of my hand. I am the one! Our decline is the result of my own. All we need is for me to get back on my feet."
Voice: John William Galt

The former head of the Council of Five in the Illuminati. Now resides within a cryo pod in Everett's basement waiting for Everett to invent the technology required to revive him...

"See how easily our technologies turn on us? The more power you think you have, the more quickly it slips from your grasp."
Voice: John Gault

The head of the Luminous Path Triad, Gordon Quick mans the front gate to their compound, and acts as JC's first major contact in the region, having known of Paul Denton's involvement in the past.

Leader of a group of scientists who defected from Area 51 and set up in Vandenberg Air Force Base to oppose Page.

"Password's enough, pal. Don't think you know something about the Lady I don't. My dad did tours out here."
Voice: Brent Anderson

A bum and a street informant in New York who gives JC advice on multiple occasions.

"It's the government, isn't it?"
Voice: Khary Payton

As his name implies, a smuggler in Hell's Kitchen.

A friend of Smuggler's who's been kidnapped by a mysterious organization and forced to do research related to the Gray Death. Saving him will make Smuggler give you a discount.

Owner of the (Hil)Ton hotel, all he wants is to run a peaceful business and keep his daughter out of trouble.

The daughter of Gilbert Renton. A prostitute.

A nosy reporter in Hell's Kitchen.

The owner of the Underworld Tavern in Hell's Kitchen, who provides JC with some local gossip during his initial journey through the area.

The leader of the resistance group Silhouette, located in France, and a friend of Paul's.

The daughter of the late Illuminatus Elizabeth DuClare.