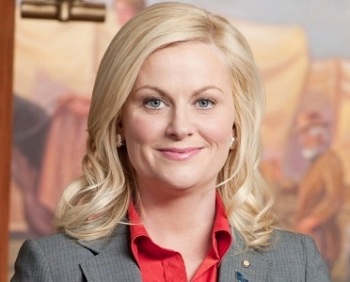 "One person's annoying is another's inspiring and heroic."
"It is my dream to build a park that I one day visit with my White House staff on my birthday. And they say, 'President Knope, this park is awesome. Now we understand why you're the first female president of the United States.'"

Leslie is the deputy director of the Parks and Recreation Department in Pawnee, Indiana. An inversion of the Obstructive Bureaucrat, Leslie is a cheerful bureaucrat full of can-do spirit. This makes her The Pollyanna in an occupation where almost everyone else is cynical and jaded to one degree or another. She is also a Determinator. 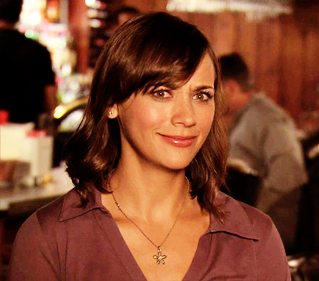 "I'm putting myself out there, meeting some new people, having some casual fun, and it is...awkward."
"The Parks Department has done so much for me that if I can help them out in any way, I will. Oh, God. Maybe I should just give them all free flu shots."

Leslie's Heterosexual Life Partner. They first meet in the pilot episode, when Ann attended a town hall meeting to bring an abandoned construction pit to the government's attention. For the first three seasons, Ann was a nurse at the local hospital, making it somewhat baffling that she seemed to spend so much time with the other characters at City Hall. Eventually, she was given a part-time job at City Hall to solve this problem. She is generally a Straight Woman. 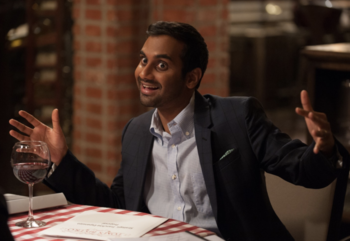 "My gravestone's gonna be a 60-inch touchscreen with a hologram of four me's singing 'End of the Road' by Boyz II Men."
"I had to call in a few favors, but if you don't call in favors to look at women in bikinis and assign them numerical grades, what the hell do you call in favors for?"

Tom is Leslie's immediate subordinate, in charge of scheduling parks activities and an aspiring media mogul. Networking, hot women, expensive suits, hot women, slacking off, and hot women are just a few of his favorite things. As of the end of Season 6, he runs an Italian restaurant, Tom's Bistro. 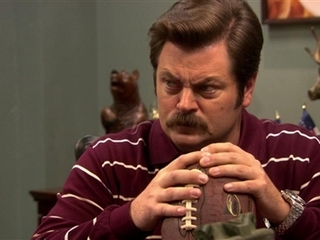 "I was born ready. I'm Ron [bleep]ing Swanson."
"I'd wish you the best of luck, but I believe luck is a concept created by the weak to explain their failures."

Leslie's manly, mustachioed, unapologetic libertarian boss who, engaged in a continuous attempt to sabotage the Pawnee government, secretly (or not-so-secretly) tries to stop anything from getting done. Leslie does his job for him, allowing him to devote his time to being a Memetic Badass. 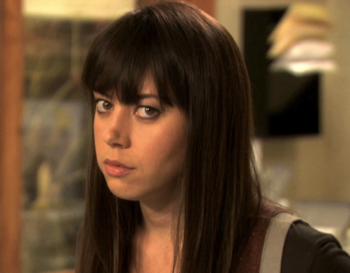 "[Dogs] should be rewarded for not being people. I hate people."
"No, I didn't win, but at least I didn't make any new friendships."

April is The Snark Knight. Originally, she was an apathetic college intern who constantly slacked off and seemed like she would rather be anywhere else. In the second season, she was hired as Ron's assistant specifically to stonewall anyone wishing to meet with him. Near the end of the fourth season, it's revealed that, while she generally hates people, April loves animals and realizes that this might be her calling. In Season 5, the incompetent Animal Control Department is absorbed by the Parks Department and April is appointed the director of the new sub-department. 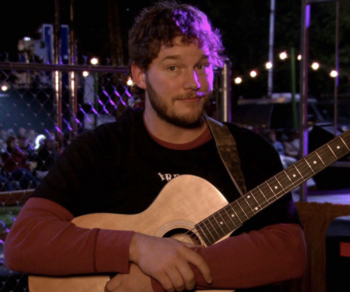 "I have no idea what I'm doing but I know I do it really, really well."
"The words that they say sound passive, but seem aggressive. I feel like there should be a term for that. Like, nice-y mean-y?"

Andy was introduced as Ann's idiotic musician boyfriend in the first season and originally intended as a temporary character. He was retained in the second season after Ann broke up with him and landed a job as a shoe-shiner at City Hall. He had a Will They or Won't They? relationship with April in the second season. In the third season, he and April married after having dated for less than a month, much to Leslie's horror. Since then, their marriage has proved surprisingly stable. At the start of Season 4, Andy leaves his shoe-shiner job and joins the Parks Department.

Donna: Andy, you're fine, but you're simple.
Advertisement:
Ben Wyatt 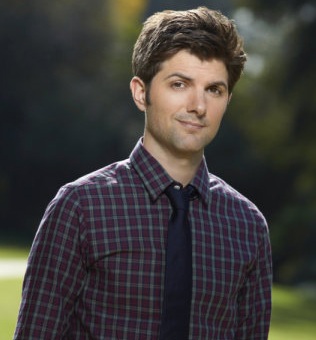 "Nerd culture is mainstream now! So when you use the word ‘nerd’ derogatorily, that means that you’re the one that’s out of the zeitgeist!"
"Well, you have to be able to make decisions like this, Leslie. You have to be harsh, you know. No one's going to elect you to do anything if you don't show that you're a responsible grown-up."

A state auditor who comes to Pawnee with Chris to evaluate the town's funds at the end of the second season. Promoted to series regular in the third season. He is blunt and cynical but has a Freudian Excuse. 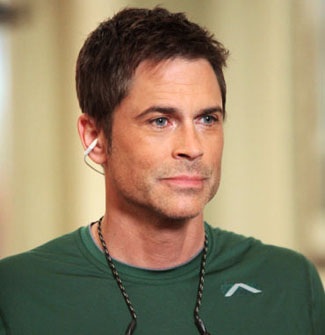 "If I keep my body moving and my mind occupied at all times, I will avoid falling into a bottomless pit of despair."
"I take care of my body above all else; diet, exercise, supplements, positive thinking. Scientists believe that the first human being who will live a hundred and fifty years has already been born. I believe I am that human being."

Ben's partner, opposite and Heterosexual Life Partner. He is cheerful and optimistic, but, in an effort to be liked, he always forces Ben to be the messenger for any bad news. Chris is also a health nut. In Season 3 the mayor of Pawnee asks him to fill in for the city manager who's recovering from a heart attack.

Although in a later episode he seems to understand that Ann is using sarcasm, but not that it's meant as a jab at him. 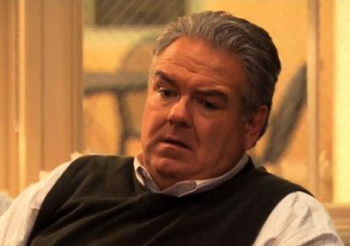 " I told them my real name was Garry, and they said "who cares?". What a fun bunch of guys."
"Well, you know it's like I always say, 'It ain't government work if you don't have to do it twice.'"

An older Butt-Monkey who has worked in the Parks Department since the 1970s. He's picked on by everyone, particularly "mean" characters like Tom and April, but also by "nice" characters like Leslie. He is regarded as a boring, out-of-touch loser, but actually seems to have his personal life squared away better than anyone else. 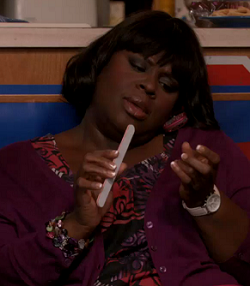 "I'm live-tweeting this dumbass conversation."
"We're not big on hospitality. The Meagles are a cold people."

A Sassy Black Woman who is the office manager for the Parks Department. Donna has expensive tastes as she apparently comes from a wealthy family (R&B singer Ginuwine is her cousin, as revealed in "Sweet Sixteen"). Her most prized possession is her Mercedes-Benz M-Class SUV, which you better not mess with if you know what's good for you. She Really Gets Around and has had a variety of weird sexual exploits, which we mostly hear about in Noodle Incident format. She eventually settles down and gets married in the final season. 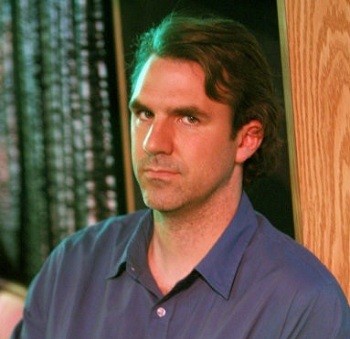 "Recently I have been thinking about maybe leaving this job, but I felt like I needed a sign. And then Ann broke up with me the week I was going to propose, the government got shut down and yesterday one of those pigeons took a [bleep] on me. And I was indoors, so..."
"I hit rock bottom that night. I mean I literally fell to the bottom of a pit and hit a rock. I remember laying there thinking, 'There’s probably a good reason why I'm down here.' And then I remember thinking, 'I need morphine.'"

A city planner. Straight Man caught in a Love Triangle between Leslie and Ann. He started off the series as a Handsome Lech, but this was quickly dropped and he spent most of his time on the show being a Ladykiller in Love. He was Put on a Bus when he joins a private company at the end of Season 2. 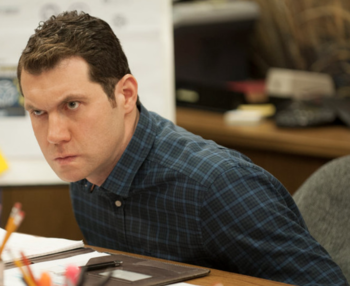 "SOMEBODY FOLLOW ME, I'M DISTRAUGHT!"
"I have a medical condition, all right! It's called caring too much! And it's incurable!"

The Camp Gay former office manager of Eagleton's Parks Department who transferred to the Pawnee department when the two towns merged. Has No Indoor Voice and prone to Comical Overreacting.