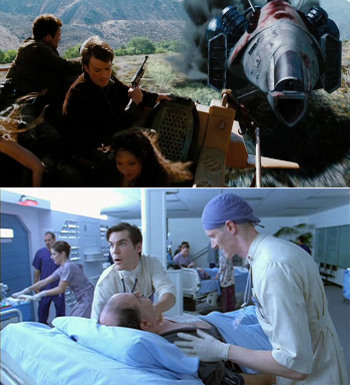 Every Space Western needs a bit of Medical Drama.
Advertisement:

Writing drama is hard. Sticking to a popular formula is easy. That's why sometimes you can create a temporary Genre Shift in a series to fill up time in your story. For example, many television shows are general drama, but... with a character who is a doctor. You know that soon enough, there's going to be a central episode for that character, complete with a medical plot.

This trope can be glaringly obvious or just a subtle genre that doesn't fit into the rest of the series. Medical Drama is used as an example because it is difficult to hide.

A good test to see whether something fits this trope: If you turned on the television or opened the book at a particular point, would you be able to guess the main genre correctly?

This trope is often paired with Mood Whiplash, and an Art Shift may kick in to better fit the brief genre change. Episodes that have these experiences usually get a Bizarro Episode reputation and may have either Fanon Discontinuity or Canon Discontinuity.note Compare the question above to the "Very Important Corollary" on that page. For a permanent genre change, see Genre Shift; when the plot starts out as something unrelated leading up to the switch it's a Halfway Plot Switch; and when a work has a chronic case of this trope it's a Genre Roulette. When a non-romance story goes out of focus (either temporarily or permanently) due to a Romance Arc, that's a Romantic Plot Tumor. See Courtroom Episode, Noir Episode, Superhero Episode, Cowboy Episode, and the rest of the Episodes page for common sub-tropes. For the same principle applied to video game genres, see Unexpected Gameplay Change.