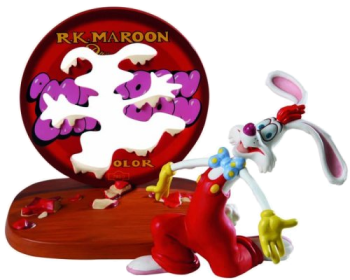 This hole, it was made by me!
"If you're like me, when you first saw this question, you might've imagined the puck leaving a cartoon-style hockey-puck-shaped hole. But that's because our intuitions are shaky about how materials react at very high speeds."
— What If?, "Hockey Puck"

Any cartoon character running towards a solid body at sufficient speed will pass through and leave a hole exactly the same shape as they are (including clothing, fur and whiskers, etc.). May be combined with There Was a Door and be played for comedy. If the character is large enough, it can become a Roofless Renovation. Can also be horizontal if falling from a great height.

Sometimes, if the surface is metal, the character will leave a perfect depressive imprint, often in impossible mold-like shapes.

For dramatic use see Crater Power. Contrast Forcibly Formed Physique where the character ends up shaped like an existing hole.

While obviously unrealistic, it's not impossible for this to happen in real life...though it will never be exact.

Bubba crashes cleanly through a wall.

Bubba crashes cleanly through a wall.