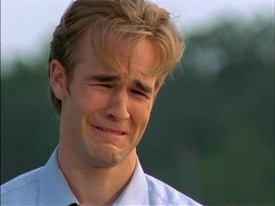 "The gang paddles frantically, with Locke yelling at them to pull (which makes no sense) or move, and I'm giggling so hard I'm going to get the hiccups. Miles says, "I think they want their boat back," and I have to pause the TV to catch my breath, even though the music is trying to tell me this is a desperate serious scene and in no way at all funny."
— Television Without Pity's recap

of Lost, "The Little Prince"

Come on, admit it... when you saw these scenes on TV, you wanted to laugh out loud, even if you weren't supposed to.

Series with their own lists: