Athena (AKA The Gladiator) 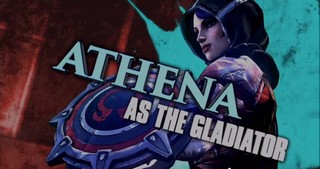 Voiced by: Lydia Mackay
"Athena, out"

A former Crimson Lance assassin, who escaped to help the Vault Hunters loot Knoxx's armory. Afterwards, she traveled around Pandora as a gun-for-hire before taking a job as a Vault Hunter for a lowly Hyperion programmer by the name of Jack, becoming one of his chief lieutenants in his rise to power.

Her Action Skill lets her pull out her Kinetic Aspis, a shield that absorbs all frontal damage, building up power before being tossed at the nearest enemy.

Wilhelm (AKA The Enforcer) 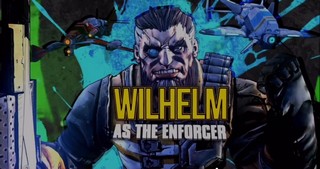 Voiced by: Todd Haberkorn (Borderlands 2); Bryan Massey (Pre-Sequel)
"Wilhelm here. Tell me what to shoot and how much I'm gettin' paid."

Wilhelm is a Hyperion cyborg who serves Handsome Jack, and who nearly defeated the original Vault Hunters after the events of Borderlands. Originally a legendary mercenary/bodyguard who became obsessed with enhancing himself via cybernetics, he signed on as a Vault Hunter under Jack after he was offered a couple million dollars.

His action skill lets him summon Wolf and Saint, two Surveyor Drones that attack his enemies and heal him respectively.

Nisha Kadam (AKA The Lawbringer; Sheriff of Lynchwood) 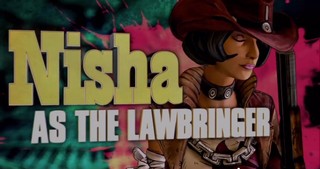 The Sheriff of Lynchwood, a Hyperion-controlled town on Pandora. She is the current girlfriend of Handsome Jack, and was given the city as an anniversary present. Formerly a bandit who hunted down other bandits, she began working for Jack for the action.

Her Action Skill has her temporarily lock onto enemies while gaining substantial buffs, locking onto critical spots when aiming down sights. 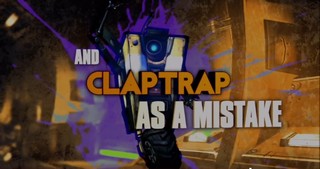 Voiced by: David Eddings (not the author); Jim Foronda (Borderlands 2 Commander Lilith and the Fight for Sanctuary DLC, Borderlands 3)
"Helloooo, travellers! I am a CL4P-TP steward bot, but my friends call me Claptrap!"

A type of Hyperion robot designed to provide assistance to settlers and newcomers to Pandora. They are almost universally hated by the population of the planet, and the bandits use them as target practice. The one who greets the Vault Hunters in Fyrestone is the most ubiquitous, and becomes a more major character in the second game, eventually becoming a playable character in the Pre-Sequel.

His action skill has him run VaultHunter.exe, a buggy program that analyses the battlefield and grants him a random ability it deems appropriate for the situation. 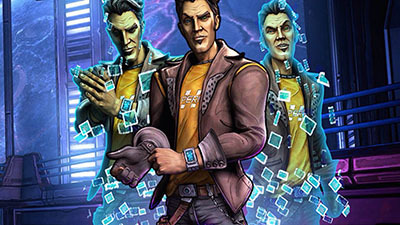 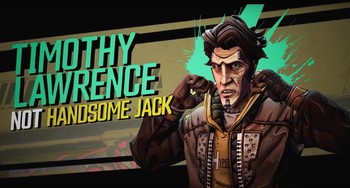 Voiced by: Dameon Clarke
“And the world just got 25% more handsome!”

An actor by the name of Timothy Lawrence who was surgically altered to look and sound like Jack to act as his body double.

His action skill allows him to summon two Digi-Jacks to attack his enemies, with another automatically spawning when one dies. His "The Hero of This Story" skill tree focuses upon making himself and his Digi-Jacks more directly powerful with grenade spam and health regeneration. His "Greater Good" tree is filled with kill skills and skills that benefit from him using his Digi-Jacks as disposable cannon fodder, capping off with a skill that makes all his kill skills trigger when a Digi-Jack dies. His "Free Market" skill tree is based around weapon-swapping and equipment management; giving him benefits for using different weapons on the same enemy or passing the benefit of one brand of gun onto another when he swaps.

Lady Aurelia Hammerlock (AKA The Baroness) 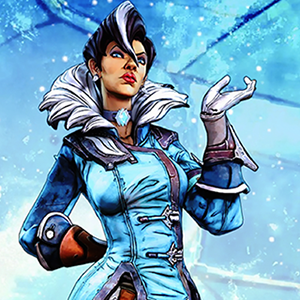 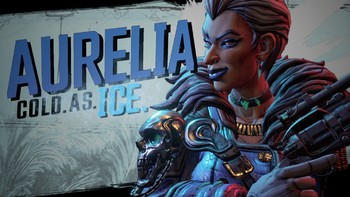 Voiced by: Kenneisha Thompson
"Darling, I'm simply going to kill you for fun. It's not personal, I just bore easily."

The sister and arch-enemy of Sir Hammerlock, Aurelia is the heiress of the Hammerlock family fortune who travels the galaxy to hunt dangerous creatures and to plague her brother's existence (often both at the same time). Growing bored, she came to Pandora on safari, eventually getting tangled up with Jack's entourage.

Her action skill, Cold As Ice, has her throw out her Frost Diadem Shard located on her left arm. The charm automatically homes in on nearby targets and attaches to them, dealing Cryo damage in an area around them.