Moserah "Moze" Andreyevna (AKA The Gunner) 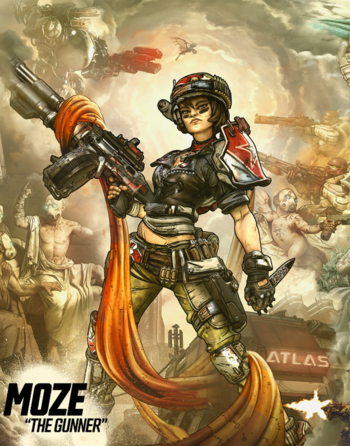 Voiced by: Marissa Lenti
"My squad leader said Darzaran Bay would be my last mission. Easy in, easy out. And afterwards, my Iron Bear-class mech would be all mine. Routine gig, he said. Routine gig my ass."

A former member of the Vladof Ursa Corps. After a disastrous One Last Job, she decided to go AWOL alongside her mech.

Her Action Skill deploys her Iron Bear mech armor that she rides in, which can be customized with a variety of weapons such as chain guns, grenade launchers and railguns.

Amara (AKA The Siren) 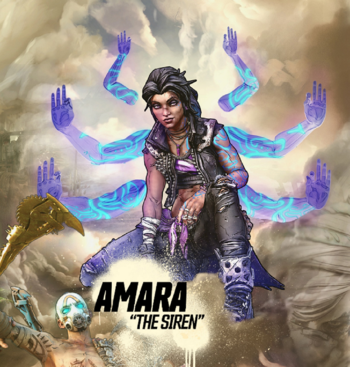 Voiced by: Zehra Fazal
"I'm always looking for a fight. A fight for justice. A fight for what's right. But at this point, I'd settle for anyone who doesn't run."

A Siren vigilante who fought criminals on her homeworld, she decided to travel the galaxy in search of greater challenges.

Her Action Skills include a Phasegrasp that holds an enemy in place similar to Maya's Phaselock, a Phaseslam that has her perform a powerful melee attack that knocks enemies away and a Phasecast that sends forward an Astral Projection to damage anything that gets in its way.

Zane Flynt (AKA The Operative) 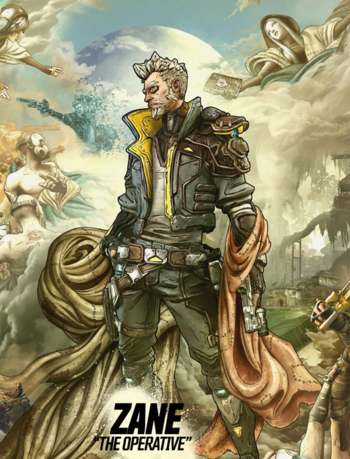 Voiced by: Cian Barry
"Listen, gorgeous, I've had a lot of jobs in my day. Janitor, exterminator, plumber, you name it. But through it all, I've been... alone."

A retired assassin who has done work for every corporation and the third of the Flynt siblings. After making too many powerful enemies, he decided to lay low on Pandora.

He makes use of various gadgets for his Action Skills such as a flying drone that attacks his enemies, a holographic decoy that can both attack and distract his enemies and a deployable barrier that both protects his allies and amplifies their damage when they shoot through it.

FL4K (AKA The Beastmaster) 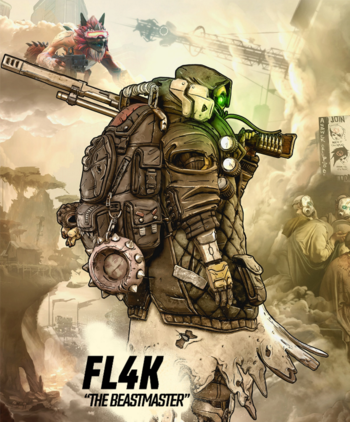 Voiced by: SungWon Cho
"But there must be an alpha. And the hunt... The hunt is never-ending."

A mysterious beast tamer. Little is known about them except that the bandits consider them "totally badass." Originally an indexing bot who served a Grand Archivist, they achieved self-awareness as well as developing a thirst for murder.

They come with the ability to have one of three pets out at all times: A Spiderant that gives them passive health regen, a Jabber equipped with a pistol that boosts their movement speed and a Skag that boosts their damage, all of which can evolve depending on certain augments. Their Action Skills allow them to summon Rakks to attack their enemies, create a radioactive rift to teleport and enhance their pets and a cloak that lets them perform three auto-crits.

The Skag; AKA Mr. Chew

FL4K's Skag, which can be upgraded through the Master skill tree and grants FL4K increased damage dealt. It can evolve into a Great Horned Skag or an Eridian Skag. The skag has a greater focus on crowd control than the other pets.

FL4K's Spiderant, which is upgraded through the Hunter tree and grants FL4K increased health regeneration. It can evolve into either a Spiderant Scorcher or Spiderant Countess. It has a bigger focus on damage and durability than the other pets.

FL4K's Jabber, which is upgraded through the Stalker tree and grants FL4K increased movement speed. It can evolve into either a Beefcake or a Gunslinger. It has the most consistent performance of the pets, and has a high focus on utility.