Axton (AKA The Commando) 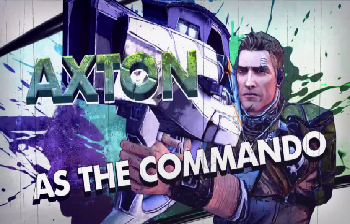 Voiced by: Robert McCollum
"Sorry, boys, I've got turret syndrome! Get it? 'Cuz of the turret...? Sorry."

A former commando for the Dahl corporation, Axton was forced out of service due to his Glory Hound ways (which resulted in far too much collateral damage), which also cost him his marriage. He became a bounty hunter until he was lured to Pandora by Handsome Jack with promises of fame, fortune, and glory. Axton's skill involves deploying his Sabre Turret, which provides supporting fire and other benefits.

Maya (AKA The Siren) 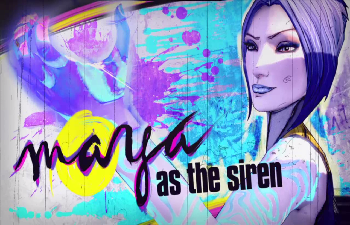 Voiced by: Martha Harms
"I'll never forget what the Head Monk told me right before I left the Abbey: "Child, you have so much left to learn" he said. I imagine he would have continued speaking, had I not pulled the trigger."

A Siren who once served as the secret weapon of an order of monks known as the Order of the Impending Storm who ruled over the planet Athenas. After learning of the monks' corruption and their plans to use her as a enforcer to keep the people of Athenas in line, she abandoned the order to seek out answers regarding her Siren lineage on Pandora. Her skill is Phaselock, letting her trap, damage, or control enemies. 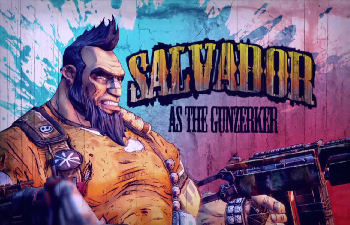 A heavily-built but not terribly huge native to Pandora who was lured into becoming a Vault Hunter by a Hyperion raid on his village, which promised him violence and challenge in equal measure. His skill is Gunzerking, allowing him to regenerate health and ammo, become resistant to damage, and dual-wield weapons.

Zer0 (AKA The Assassin) 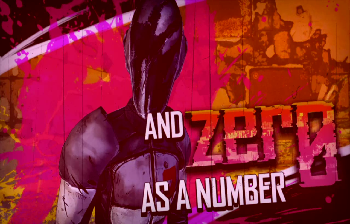 Voiced by: Mike Turner
"Your eyes deceive you./ An illusion fools you all./ I move for the kill."
An extremely mysterious assassin who came to Pandora to find a challenge worthy of his skills. Beyond that, we... really don't know much else. It's up in the air as to whether he's even human. His skill is Deception, which creates a holographic decoy while he turns invisible, allowing him to strike suddenly for massive damage.
Krieg

Krieg (AKA The Psycho) 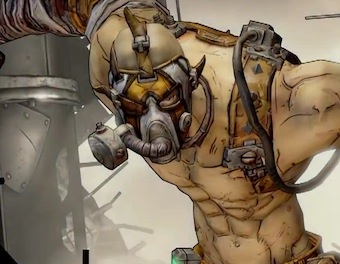 The product of horrifying experimentation at the hands of Hyperion, Krieg was once a heroic Vault Hunter. While the process did make him stronger, it also drove him almost completely insane, with the last remnants of his former self acting as a conscience to him. Encountering Maya as she waited for a train, he fell in love with her and became a Vault Hunter alongside her in hopes that she will be the one to make him sane once more. His Action Skill has him go on a rampage with his buzz axe, regaining health for every kill. 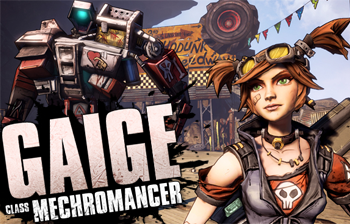 Voiced by: Cherami Leigh and Luci Christian
"I'm getting a god complex and I LIKE IT!"

A high-school engineering genius who was forced to flee to Pandora after an "incident" in her school's science fair resulted in her rival "exploding." Travels with her personal Robot Buddy, D374-TP, or "Deathtrap," which she digistructs using her specific skill.