There are many heroes and villains in the Injustice universe who have not thrown their lot in with either Batman, Superman or Grodd, going it alone on the whole. All can be found here. 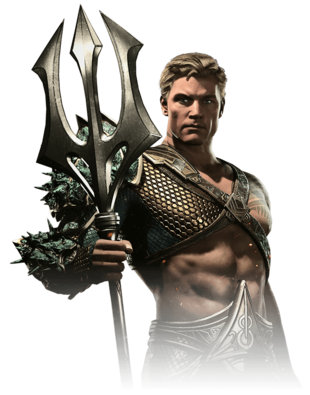 My duty is to Atlantis.

The stern, but heroic ruler of Atlantis, who has isolated his kingdom after the Regime forced it into a losing battle against Batman and his interdimensional allies. Aquaman has no love for any surface dwellers, but his ruthlessness makes him more similar to Black Adam and the Regime than he'd admit.

And despite his reputation, Aquaman is a more than formidable fighter, equipped with the lightning of the Trident of Poseidon, a kraken at constant attention, and the unflinching strength water provides all Atlanteans. 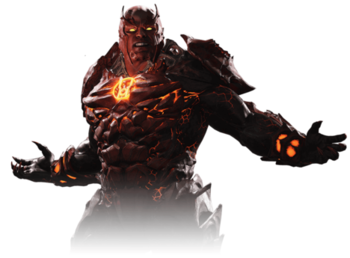 Our hellish hate will burn you all!

Once a simple family man with a wife and children, Atrocitus is the last survivor of Sector 666, the victim of a massacre by the Manhunters caused by defective programming. Since then, he has been out for the blood of the Guardians of the Universe and any who serve them, going so far as to form his own Lantern Corps, powered by the Red Light of Rage and filled with monstrously angry people who were victims of a great wrong just like he was. Sustained by his Red Lantern Ring in place of his heart and his blood replaced with molten hot plasma, Atrocitus now seeks to fulfill his long-promised revenge, punish the guilty with lethal force and fill the ranks of his corps with new members. His steely gaze now falls on Hal Jordan, prodigal Green Lantern, to be his latest recruit.

Aiding Atrocitus in his endeavors is Dex-Starr, Earth's Red Lantern — a once-ordinary cat who was filled with rage after witnessing the murder of his kindly owner. Now he aids his master in battle through plasma blasts and other assists. 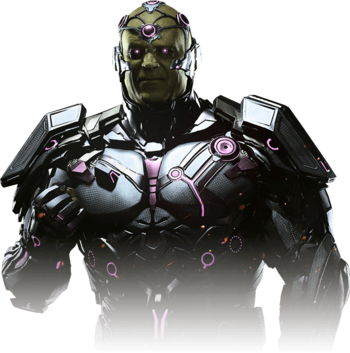 Such folly and futility in the grand design.

An alien with a twelfth-level intellect, Brainiac has amassed so much knowledge and technology from throughout the universe that the armies of Earth are nothing to him alone. He could destroy the world in an instant, but destruction is of no special interest to him. He only killed Krypton and the millions of other worlds he visited so that the knowledge he collected from them would be all the more valuable.

His tentacles are strong enough to toss around Kryptonians, his satellites are ever ready to fire into the battle, and his fists are more than able to crush the skulls of primitive species. 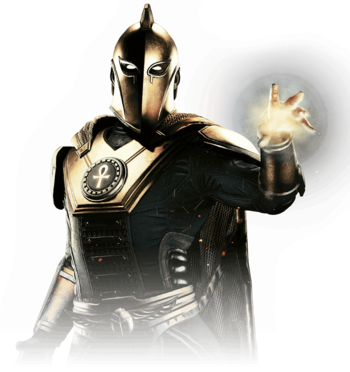 Kent Nelson is an ordinary man, but when he puts on the Helm of Fate, he becomes a powerful servants of the Lords of Order and acts to preserve the destiny of the universe. The only problem is that, in the Injustice universe, only a terrible destiny awaits the planet. From the war between Batman and Superman and the impending invasion of Brainiac, Fate only wishes to change what will come, but he is bound to let the atrocities happen so something greater than Earth will be spared. 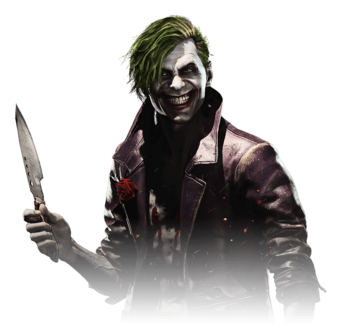 The Joker was killed by Superman before the events of the first game, but has inexplicably returned to the Injustice universe to wreak havoc once more. Whether he returned from the dead, hails from an alternate universe, or is merely a hallucination is left unanswered, but he plans to continue to plunge the world into chaos just as before.

In combat, Joker uses his revolver, knife, crowbar, joy buzzer, laughing gas canisters and a flag gun that actually fires the flag to torture his opponents. His trait allows him to get faster the more he laughs. 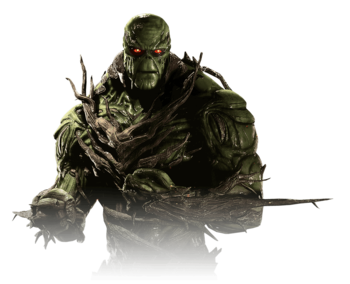 I guard the green, the plant life of Earth.

A living collection of plant matter that protects 'the Green,' plant life, from his home in Slaughter Swamp. He cares little for the wars of humanity and only allies with them when fighting a threat to the Green.

With heavy emphasis on command throws and ground combat, Swamp Thing can reach across the screen by turning his hands into vines, copy himself to combo enemies, and sprout branches to surprise airborne enemies.

Wonder why Brainiac fights himself at the end of Battle Simulator? Well, if you're okay with spoiling Brainiac's arcade ending, read about the rest of this character sheet.

Good? Okay, so in Battle Simulator, it turns out the playable Brainiac is really a disguise for Brainiac 5, a heroic descendant of, you guessed it, Brainiac. He's returned to defeat his ancestor to clear the name of his species and undo his many crimes.