Voiced in Japanese by: Chinami Nishimura
Voiced in English by: Bella Hudson (under "Erica Schroeder")

She is the first Pokémon Ash captures in Unova. After being caught in the wild, she has become Ash's standard regional bird Pokémon, but she doesn't get much attention as Ash's keeps catching more Pokémon. 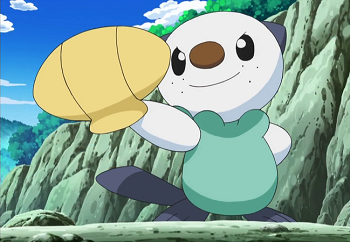 Voiced in Japanese by: Misato Fukuen
Voiced in English by: Lisa Ortiz

Originally a Starter Pokémon from Professor Juniper's lab, Oshawott got instantly attached to Ash once he complimented him for his cuteness and followed him at the early part of Ash's journey. This Pokémon is an Attention Whore that would show up in battles, but would often hide himself behind another team member when the foes appears too strong to handle. After proper training, Oshawott has become more brave...but unfortunately gets overshadowed by almost everyone on the team. 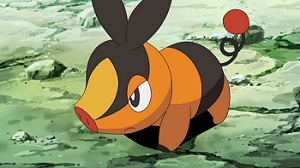 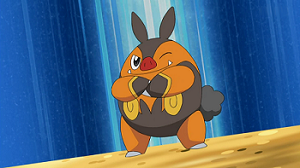 Voiced in Japanese by: Wasabi Mizuta
Voiced in English by: Marc Thompson

Ash found Tepig in a Battle Club where it was abandoned by his former trainer Shamus and almost starved to death when Don George tried to release him from a rope, but he end up his mouth tied with the rope by accident. Rather than letting him captured by Iris, Tepig decided to join Ash instead. In contrast to his fellow Unova Starter companions, Tepig is more gentle and docile. Much later on, Tepig would meet his Shamus again in a Battle Club and fights him in a Double Battle with Snivy. Due to the faith Ash and Snivy put into him, Tepig evolves into Pignite and defeats his former trainer's team and rejects him. 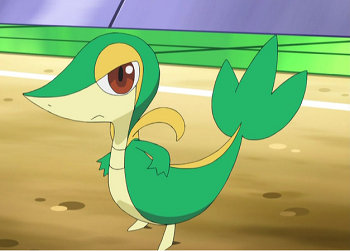 Voiced in Japanese by: Megumi Hayashibara
Voiced in English by: Michele Knotz

A female Snivy who has abandoned her previous trainer. She let herself captured by Ash once he proved to be worthy. Snivy appears cold and distant, but takes the role of the Team Mom and is very protect towards her teammates. One of her biggest strengths is that she is Made of Iron. 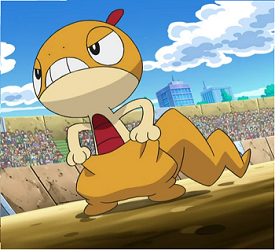 Voiced in Japanese by: Akeno Watanabe
Voiced in English by: Jason Griffith

Received as an egg from a Day Care, Scraggy hatched one day as Ash's fifth Unova Pokémon. Initially extremely aggressive, but also extremely weak, Scraggy rarely got the chance to fight in official battles. After learning Hi Jump Kick from a wild Scrafty, would later get his big moments in the Clubsplosion tournament, where he has learned Focus Blast, but was unable to perfect the move until shortly before the Unova League.

Voiced in Japanese by: Inuko Inuyama
Voiced in English by: Bella Hudson (under "Erica Schroeder")

Sewaddle was caught in Pinwheel Forrest, becoming the first Pokémon to hit over the limitation of having six party members. He evolves into Swadloon during the Gym Match against Burgh, but didn't get much focus later on until he evolves a second time. As Leavanny, he has become extremely motherly and feminine, but also fairly competent in battle. 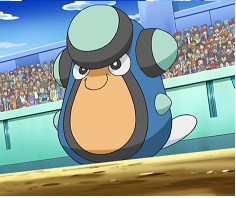 Voiced in Japanese by: Chiaki Takahashi
Voiced in English by: Carter Cathcart

Palpitoad debutes along with Stunfisk when Oshawott's was learning to perfect his Aqua Jet. After being defeated by Oshawott and Cilan, respectively, both Pokémon got captured by Ash and Cilan at the same time. Palpitoad has appeared the least among the Unova members, but all of his matches were important ones. 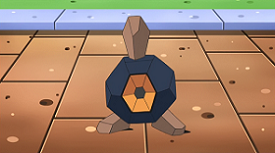 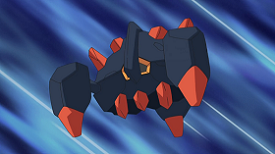 Ash first meets Roggenrola when it was looking for help to save its friends from Team Rocket. After its second battle with Tepig, Roggenrola gets caught by Ash. It would appear here and then, like when it helps to free the Forces of Nature from Team Rocket. Roggenrola eventually evolves into Boldore to win Ash's 5th Badge...but then suffers from the Worf Effect from there on.

Voiced in Japanese by: Kenta Miyake
Voiced in English by: Marc Thompson 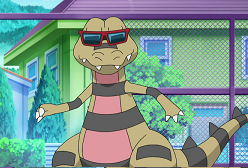 First seen as a Sandile in BW003, it followed Ash, Iris, and Cilan for a while as that and a Krokorok. He would frequently assist Ash's group, while also harboring a rivalry with Pikachu. He would finally allow himself to be caught by Ash in BW065, after following the group for 62 episodes.