The central cast of BioShock Infinite.

Booker and Elizabeth have their own pages under Protagonists section.

Warning! Due to the nature of the game, there are many, many spoilers on this page, many of which are unmarked.
Tread carefully. 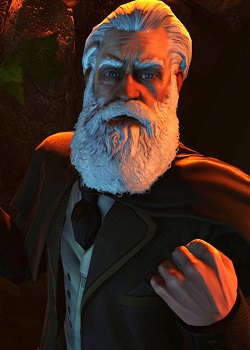 "The Lord forgives everything, but I'm just a prophet... so I don't have to. Amen."
Voiced by: Kiff Vanden Heuvel, Troy Baker (Burial at Sea)
""And the Lord saw the wickedness of man was great. And He repented He had made man on the Earth." Rain! Forty days and forty nights of the stuff. And He left not a thing that walked alive. You see, my friends, even God is entitled to a do-over. And what is Columbia if not another Ark, for another time?"

The leader of the Founders, and an embodiment of their ultra-nationalist, racist, elitist, xenophobic, and hyper-religious beliefs. Comstock is known as "The Prophet", and has turned Columbia and its people into a living shrine to himself. He is obsessed with the concept of cleansing the soul to achieve rebirth, and wishes for Elizabeth to follow in his footsteps. 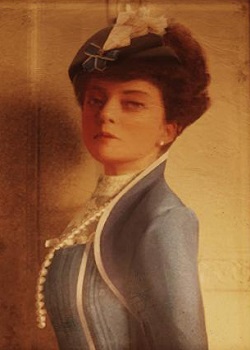 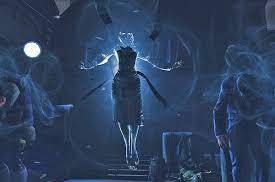 "To those who loved me, I was the most generous of souls. There was no pain I would deny them. No betrayal I would not gladly give. And when I had scorched the hearts of all who loved me, the Prophet said, 'There is nothing you can do for which I will not forgive you, for God has granted me sight, and through His eyes, even you are loved.'"

The late wife of Comstock who supposedly gave birth to Elizabeth a mere seven days after conception. She is worshipped as a martyr after her (supposed) assassination at the hands of Daisy Fitzroy. 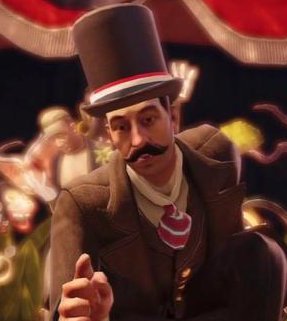 "Lately, I've been hearing a whole mess of funny new ideas. Paid vacation... Eight-hour days... Workers' compensation! Those are anarchist words, my friends! And the anarchist is the friend of hunger, the comrade of want, and the partner of disease! And I, for one, will be goddamned if I'm going to let an anarchist come between you and your livelihood!"

The major leader of industry within Columbia. Though affable, his business practices are wildly unethical, to the point where he demands sixteen-hour work days and ruthlessly exploits the underclass of Columbia in the name of profit. 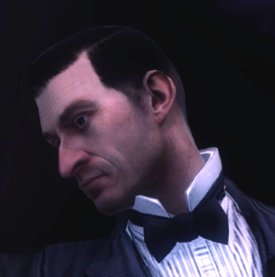 A musician by trade and brother of Jeremiah Fink. Albert was the one who introduced his brother to the use of Tears, after finding one in his studio.
Advertisement:
Songbird 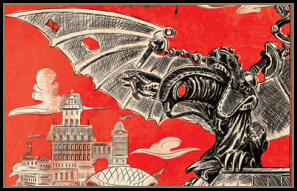 The relentless mechanical guardian of Elizabeth. He resembles a cross between a dragon and a giant bird, and seems hell-bent on preventing Elizabeth from escaping Columbia. 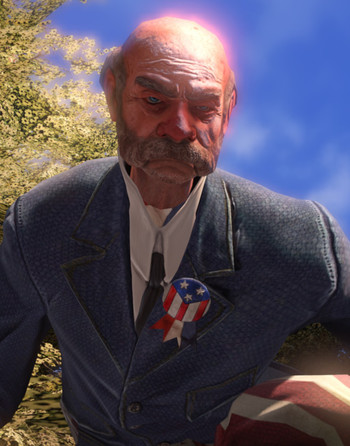 A Columbian politician, he was originally a major character. He's never seen in the final game, but is still mentioned.
First Zealot

The founder of the Fraternal Order of the Raven, affiliated with the Founders Party.

A citizen of Columbia and a high-ranking member of the city's police. 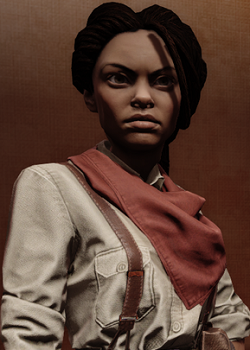 "There's already a fight, DeWitt. Only question is, whose side are you on?"

The face of the Vox Populi, working to free Columbia from the iron fist of the Founders so it can be seized by the iron fist of Daisy Fitzroy instead. Originally a hapless servant girl, she went on the run for the murder of Lady Comstock, which radicalized her. Daisy is highly intelligent and resourceful, with once-noble intentions that have been worn down over several years of fruitless fighting into an all-consuming thirst for violence. She returns in Burial At Sea where we get brief glimpses into her deeper motivations. 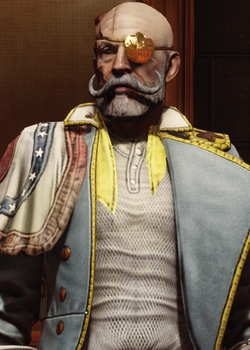 "All my men have left is a choice: Die at the hands of a tin soldier, or a REAL one!"

"Veterans! You shed your hearts' blood for Columbia, lost limb and viscera in the godless Orient! Comstock did nothing! And yet — look up! Whose image squats above you, even now? At every angle an insult! If the Prophet would make a painted whore of our past, what fresh rape does our future hold? Let us now make our stand, and fill yonder hall with true Heroes!"

A former high-ranking military leader who rebelled against Comstock after the latter re-wrote the history books of Columbia to take credit for many of Slate's own achievements. 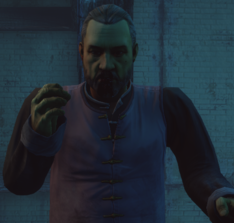 A Chinese gun manufacturer who has secretly agreed to supply guns to the Vox Populi. 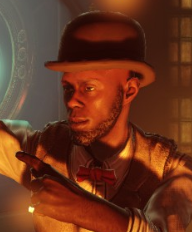 A preacher recruited off the streets of Finkton who uses his fire-and-brimstone sermons to proselytize over Columbia's radios for the cause of the Vox Populi. 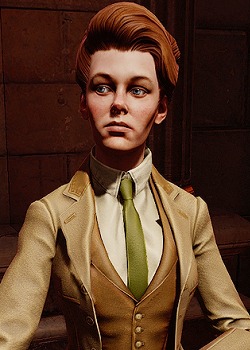 "Chin up. There's always next time." 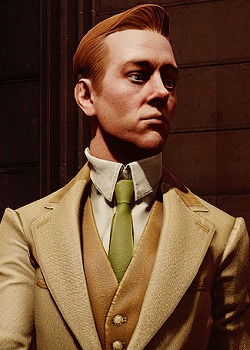 Two mysterious twins who keep appearing before Booker in the most improbable of places.

"Now he's got me huntin' down this 'Daisy Fitzroy.' Hope he don't expect me to stuff and mount her! *laughs* Yeah..."

A bounty hunter who is employed by the Founders to track down Daisy Fitzroy. He never actually appears in the game, but multiple audio diaries by him can be found, which show his gradual shift from being a bounty hunter for Comstock to a member of the Vox. A model of him is also quite obviously used for Fink's head of security. 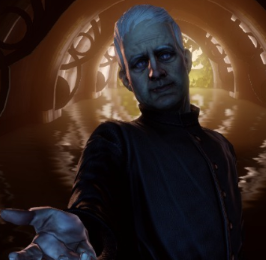 Will you be cleansed?

"Is it someone new? Someone from the Sodom Below? Newly come to Columbia to be washed clean, before our Prophet, our Founders, and our Lord?"

A blind old preacher in charge of baptism for those entering Columbia. 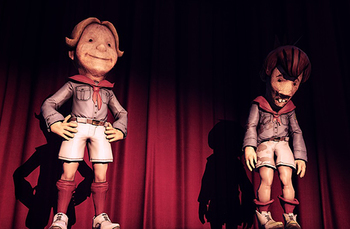 Duke on the left, Dimwit on the right
"Are you a Duke... or a Dimwit?"

Two mascots for "proper" Columbian children behavior; Duke represents the good and proper way to do things, Dimwit represents how not to do things. Their images appear all over Soldier's Field, with a toy line, voxophone players, and live stage performances. 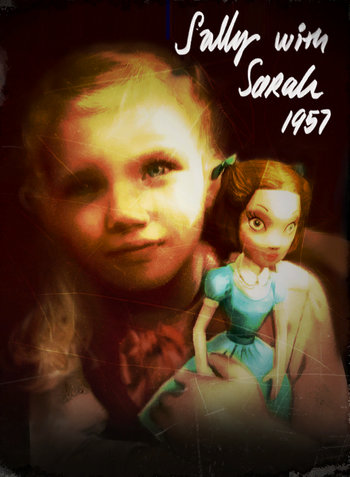 Sally is an orphan living in Rapture. Following the closure of Fontaine Futuristics, she is adopted by the Booker DeWitt of that universe. Booker lost her at one point and spent a long time trying to find her until Elizabeth approaches him with a lead on her possible location. 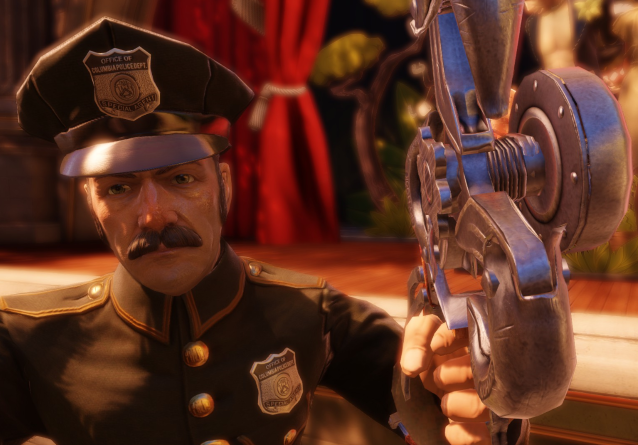 Johnny Law is the first of the hostiles you'll encounter. They carry truncheons, pistols, or even Sky-Hooks. Interestingly for Columbia's gender dynamics, many of them are female and many of the female officers are highly ranked and obeyed without question.—- 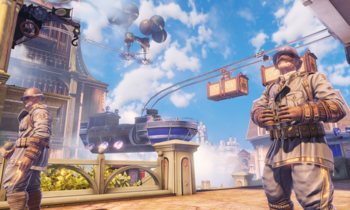 The most common foe you'll face. Many of them are from the Founders' army, but others are disenfranchised troops led by Cornelius Slate, and still others are militant rebels of the Vox Populi. 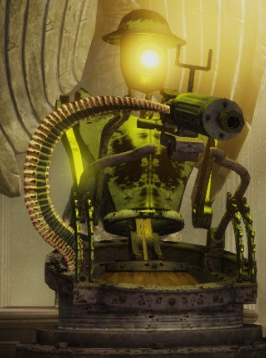 Mechanical machinations that serve as a means of security for Columbia.
Beasts 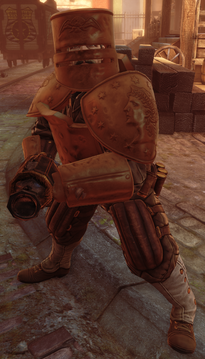 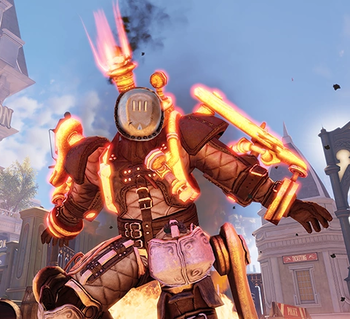 "BURN IN THE NAME OF OUR PROPHET!"

Heavily-armored members of Columbia's military. Equipped with the Devil's Kiss Vigor, they are often sent into situations that ordinary police officers or soldiers cannot handle alone.

Zealots of the Lady 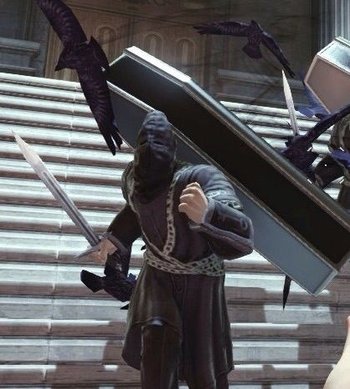 "No rest! No rest until the Lady's killer is in chains!"

Elite members of the Fraternal Order of the Raven, the Zealots of the Lady and their underlings are a religious movement that demonize Abraham Lincoln for his role in ending slavery in America and venerate his assassin, John Wilkes Booth, as a saint. While she was alive, they also worshipped Lady Comstock, hence their name; they blame themselves for failing to prevent her untimely death, and have sworn to vanquish the enemies of Columbia in their Lady's name. Furthermore, their devotion to blackbirds has led them to adopt the Murder of Crows Vigor as their weapon of choice, making the cultists challenging foes. Up close, they wield deadly swords to supplement their Vigor powers. 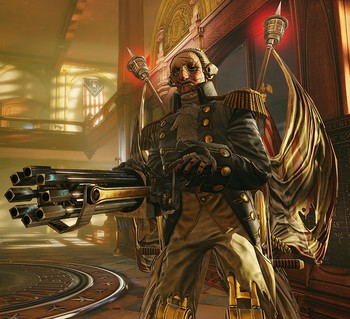 "Reap what you sow!"

A "Heavy Hitter" enemy that resembles a clockwork president. Originally designed as tour guides, they were given ridiculously unnecessary amounts of armor and firepower to help combat foreign spies, and now serve as mobile tanks. 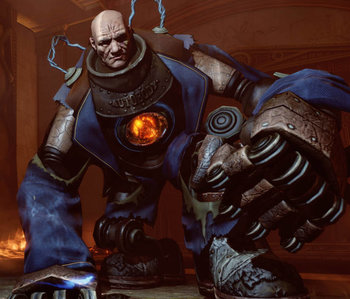 Handymen are primitive cyborgs employed in Columbia as brute labor. They are created from the merging of a crude exoskeleton (with the proportions of an ape) and human bodies, most of them unwilling. Due to the imperfect nature of the process, most "Handymen" have lost their sanity and are in constant pain. 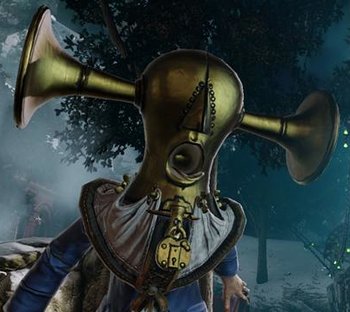 The mysterious (and creepy) guards of Comstock House. If they detect an intruder, they raise the alarm and cause all nearby enemies to attack you. 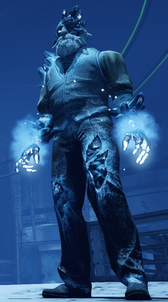 An enemy exclusive to the Burial at Sea DLC, these Splicers have consumed a massive amount of the Old Man Winter Plasmid, turning their bodies into ice.