Beware of spoilers. Only spoilers from the last two seasons (6, 7) are whited out. 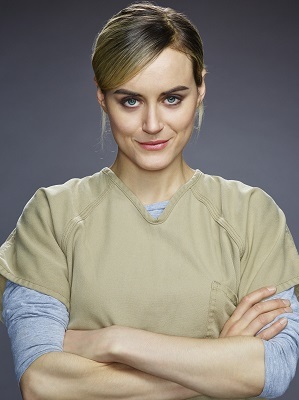 A bisexual woman who is sentenced to 15 months in prison for helping her former girlfriend Alex Vause smuggle drug money in Europe, some 10 years previously. The series shows Piper's journey through the prison system, beginning with her rough first week, during which she accidentally makes several enemies and struggles to adapt to life on the inside, as well as reuniting with Alex. 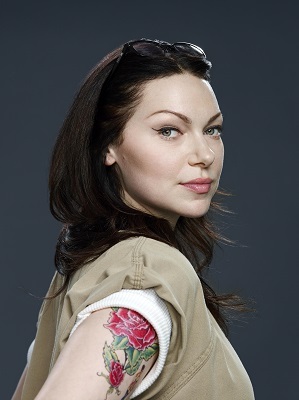 "Heroin was the best girlfriend I ever had."
Played By: Laura Prepon
"I had grand plans. Now, I can't even get past the swirling darkness in my brain long enough to land on anything."

A former drug smuggler for an unspecified international drug cartel. Years prior to the beginning of the series, she took a sexual interest in Piper after meeting her in a bar, and gradually integrated her into the drug trade while they traveled the world living in luxury. Vause once convinced Piper to smuggle cash through customs at an airport in Europe, the crime for which Piper is doing time. 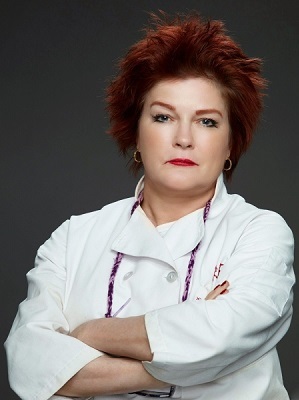 "I worked with the Russian mafia. We make the Italians look like guppies."
Played By: Kate Mulgrew & Xenia Leblanc
"The second you're perceived as weak, you already are."

A prison trustee who runs the prison's kitchen as the Master Chef and is the behind-the-scenes leader of the prison's white population. In her earlier life, she and her husband ran a restaurant and got involved with the Russian mafia. Red drew the ire of the mob bosses by punching one of their wives in the chest (rupturing a breast implant), but later impressed the same boss by offering sound advice that allowed her to swiftly climb the ranks of the organization. Red is feared and respected by most of the prisoners, and has a lot of influence with Healy. She is the closest to Nicky, with whom she has a mother-daughter relationship, and is always accompanied by Norma and Gina who cater to her needs and work with her in the kitchen. 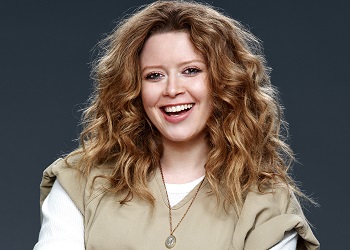 "I'm like a bloodhound for oblivion."
Played By: Natasha Lyonne
Chapman: What are you doing?
Nicky: [stops drilling a hole in the wall] It's uh, an art piece representing the futility of blue-collar labor in a technological age. And vaginas.

A former drug addict, now Red's most trusted assistant, Nicky has a loud mouth. She swiftly befriends both Piper and Alex, expressing curiosity about what happened between the two of them outside of prison. Her mother, a wealthy socialite, lived in a separate house and Nicky was raised by a nanny. This was what initially led to Nicky's drug addiction. Upon arriving in prison, Red had helped her through her worst bouts of cold turkey. For this reason, Nicky now looks up to her as a mother figure, to the point where she actually refers to her as "mom" in the presence of other inmates. 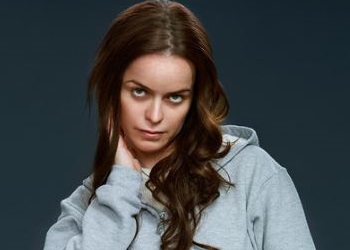 "I'm just a simple woman doin' the work of the Lord."
Played By: Taryn Manning

A former drug addict who frequently preaches about God, Tiffany suffers from very bad teeth. She was sent to prison for shooting an abortion clinic worker in broad daylight. The local press believed that it was because of her religious beliefs—leading to her receiving funding, support and even a fan base from religious right groups—but her actual motivation was because the worker had made a snarky comment about Tiffany's having had five abortions at the clinic, and Tiffany reacts violently to people "disrespecting" her. Tiffany's religious rants are often laced with racism and hostility. 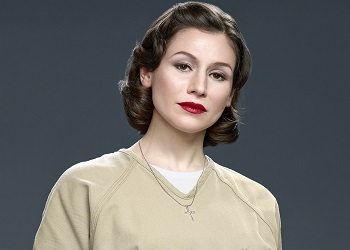 "It's like the less time you got, the slower it goes."
Played By: Yael Stone

A hyperfeminine and often racist Italian-American inmate, still hopefully planning for a wedding whose fruition is mocked by her fellow inmate, friend, and casual sex partner, Nicky Nichols. She speaks with a strong accent that inexplicably mixes regional features from both New York City and Boston. 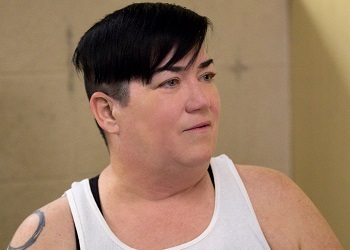 "Ain't no party like a Big Boo party."
Played By: Lea DeLaria

A prison inmate and lesbian, she has had several "wives" during her incarceration. 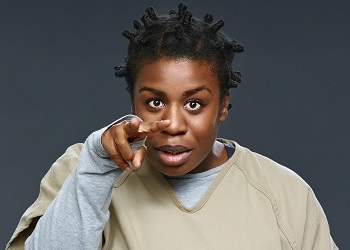 "I am not crazy. I am unique."
Played By: Uzo Aduba
"Sometimes people just don't want to play with you, and that's okay."

A mentally unstable inmate who develops an obsession with Piper. Suzanne is a lesbian who, according to Healy, has been a problem in the past, with a violent history. 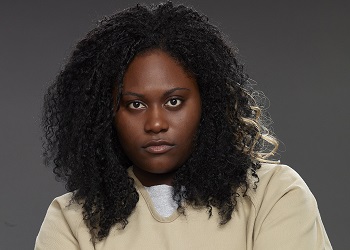 "The world ain't all sunshine and rainbows. It's a very mean place."
Played By: Danielle Brooks
"So there I am, topless, sitting in this bulldozer in like a construction site. BBQ sauce all over my titties, and I'm like, “What the fuck… again?"

An inmate and the black representative on the WAC, she works in the prison library and sports a weave made of blond hair given to her by Piper. 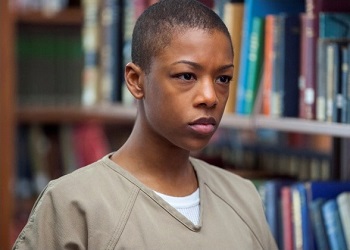 "My name is Poussey. Accent à droite, bitch."
Played By: Samira Wiley
"We all in here because we took a wrong turn going to church!"

A prison inmate, she has been in prison for two years at the start of the series and has four years left. Poussey is a good-natured jokester and is often seen with her best friend "Taystee" (whom she helps out in the library). 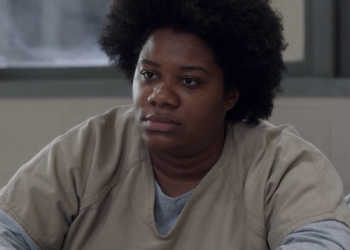 "Bitch! If grateful paid the bills we'd all be Bill Gates."
Played By: Adrienne C. Moore 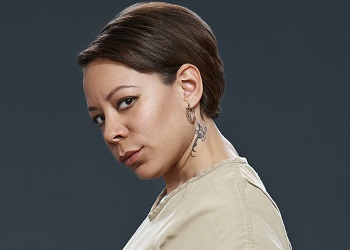 "I don't trust any of you crazy bitches. You both fuckin' scorpions."
Played By: Selenis Leyva

Red's opposite number among the Hispanic and Latina inmates, though with no organized crime connections. She is a mother of four. She organizes domino games and looks out for the other inmates, either by giving advice or by performing Santeria spells (which she refers to as "Catholic plus") for them. She is often critical of Daya's inability to speak Spanish but still accepts her as one of her own. 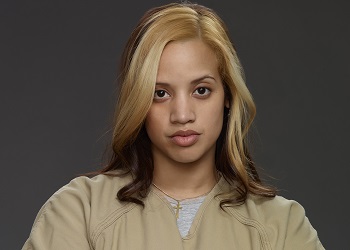 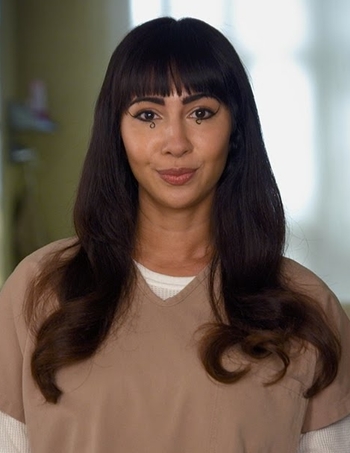 One of the Hispanic inmates, she is shown to be rather misinformed, if not totally dim at times, genuinely believing that black people cannot float due to their bone density. This leads to Maritza stating that her head is full of "caca" and Aleida referring to her as "Flacaca". She appears to be a goth, wearing gothic makeup and being obsessed with such bands as The Smiths and Depeche Mode. 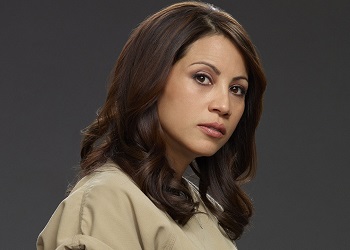 Daya's incarcerated mother. She was involved with a man who had her cutting and bagging drugs in her kitchen. In flashbacks, it is shown that she had little concern for her children and was obsessed with her boyfriend. She says during a visitation that she took a fall for him and is upset that he won't visit her. 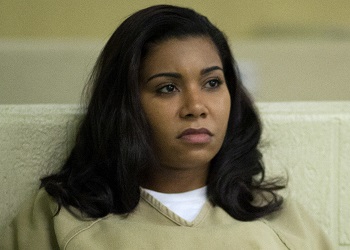 A pregnant inmate who acts as the Hispanic and Latina representative for WAC. When she goes into labor she is taken to a hospital, and later returns to the prison after having her newborn taken away from her, which elicits extreme sympathy from her fellow inmates. 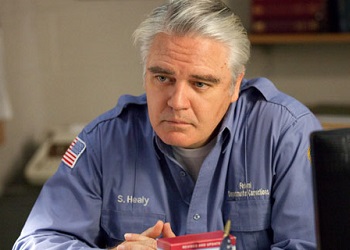 "You know what you get when you try around here? Not much."
Played By: Michael J. Harney & Zachary Doran
"Lesbians can be really dangerous. It's the testosterone."

An old prison guard and supervisor who has a Master of Social Work and acts as prison counselor to Piper and several other inmates. Healy is outspoken against lesbians and has a strange personal vendetta against them, cautioning Piper at the beginning of the series not to be involved with them. He is initially presented as someone who, though rigid, avoids confrontation and so is contemptuously referred to as "Samantha" by Caputo, who feels that Healy is not tough enough on the inmates. Healy generally appears weary and often tells the inmates what they want to hear so they will leave him alone. Early on, he appears particularly sympathetic towards Piper and even acts biased in her favor. However, he increasingly dislikes her as he hears rumors of her alleged lesbian activities. 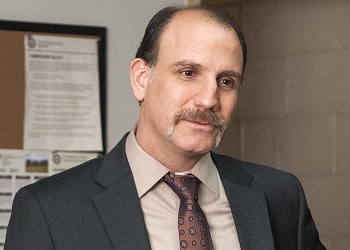 "These are complicated ladies in a complicated place."
Played By: Nick Sandow
"You have not seen crazy until you've seen two hundred women with anger issues fighting over who's going to be the ass end of a camel."

The administrative officer at the prison. Caputo directly oversees the prison's staff, dealing with concerns and often pushing for tougher control to ensure safety. Repeatedly, Caputo struggles to balance running a tight operation in the prison while also having interest in improving conditions for inmates and staff, alike. Caputo is also adversarial towards Figueroa, whose job he wants, and also has an interest in gardening.