Film / Attack of the Clones
aka: Star Wars Episode II Attack Of The Clones 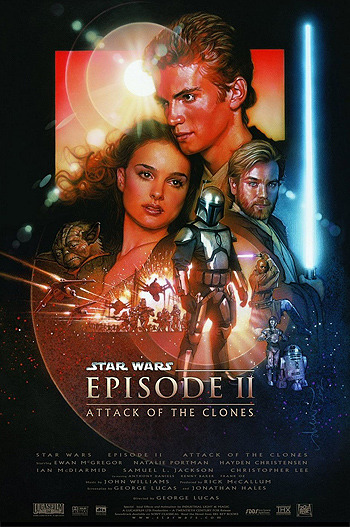 Yoda: Victory? Victory, you say? Master Obi-Wan, not victory. The shroud of the Dark Side has fallen. Begun, the Clone War has...
There is unrest in the Galactic
Senate. Several thousand solar
systems have declared their
intentions to leave the Republic.

This separatist movement,
under the leadership of the
mysterious Count Dooku, has
made it difficult for the limited
number of Jedi Knights to
maintain peace and order in
the galaxy.

Senator Amidala, the former
Queen of Naboo, is returning
to the Galactic Senate to vote
on the critical issue of creating
an ARMY OF THE REPUBLIC
to assist the overwhelmed
Jedi....
Advertisement:

Star Wars: Episode II – Attack of the Clones, or simply known as Attack of the Clones, is the 2002 sequel to The Phantom Menace and the second film in the Star Wars prequel trilogy. It is directed by George Lucas, with the screenplay by Lucas and Jonathan Hales (The Young Indiana Jones Chronicles) and the story by Lucas. It was released on May 16th, 2002.

Ten years after the liberation of Naboo, the Galactic Republic is once again in crisis as a large number of outlying systems, backed by many of the galaxy's megacorporations and led by former Jedi Master Count Dooku (Christopher Lee), announce their intent to secede from the Republic. With tensions pushing both sides to the brink of war, Senator Padmé Amidala (Natalie Portman), one of the biggest proponents of a peaceful resolution to the conflict, becomes the target of an attempted assassination.

At the direction of the Jedi Council, Obi-Wan Kenobi (Ewan McGregor) leads an investigation into the assassination, untangling a web of conspiracy pointing to the involvement of the Jedi's ancient enemy, the Sith Order. Meanwhile, his apprentice, Anakin Skywalker, (Hayden Christensen) is tasked with protecting Padmé, and the two soon find themselves struggling with their emotions for one another, forcing Anakin to confront some personal demons - and the lure of The Dark Side...

Its story is followed by The Clone Wars and Revenge of the Sith.

The film received two novelizations in English: an adult-oriented version by R.A. Salvatore, and a childrens' version by Patricia C. Wrede.

Begun, the Trope War has:

Example of:
Flaunting Your Fleets