The current President of the USA.

The monarch of the former United Kingdom of Great Britain and Northern Ireland, crowned after his father Charles was killed during the destruction of Britain by the barrier.

William's father and predecessor, ponified during the Fall of Britain. Reigned for several months, but made the best of it, as his reign oversaw the PHL's rise as a credible counterpoint to the PER - and later on, the Solar Empire itself.

A mysterious Englishman who interviews Stellar Wind in Adrift. He works for the PHL and the former British Government in some unknown capacity. As his database profile name implies, he's actually Mycroft Holmes.

The recently re-elected President of Indonesia. His tendency to blend in with civilians gets him stuck with a group of smugglers and civilians on board the Mamayev Kurgan.

Marcus's late mother. She was the very same Megan who traveled to the ponies' world many years ago, and vanquished Tirek.

A prominent industrialist operating from Rio de Janeiro, whose company specializes in the majority of the Magitek products made on Earth.

The protagonist of the Starvation side story. Works as a guard for Crowe Labs in Rio de Janeiro. Was an avid artist before the war broke out, judging from the various hobbies mentioned.

Mother of Button Mash and a refugee living and working in Brazil.

Coal Embers
Coal Embers
"I've seen shit you would not believe. I've caught rides on trains, I've outrun Wonderbolts, I've met the Dragons of the East. I ran away from my parents when the war started."
—Coal Embers herself, explaining what she's been through.
A young unicorn defector from TCB Equestria, who records her exploits for Crowe Labs. 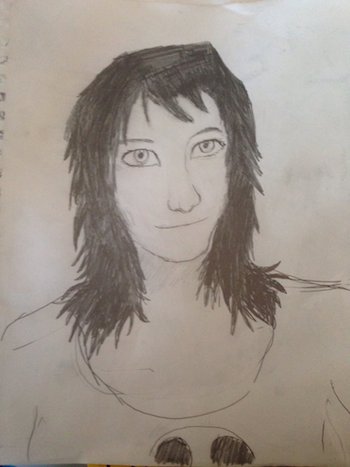 "The Pacific Queen."
A U.S. Navy Captain working to eradicate the PER all across the Southern Pacific Ocean.
Lt. Com. Thunderwing
Thunderwing

A pegasus stallion, lover of Rebecca Kleiner and one of the leaders of the Stampede Fleet

Crew of the Mamayev Kurgan

The main character of Adrift, he's a unicorn who left Equestria in order to pursue a life on Earth, only to be dragged into a smuggler group.

A young Norwegian woman, skilled with a rifle. Part of the escorts on board the Mamayev Kurgan, and the only female among the smugglers.

See The Other Side of The Spectrum - Equus Prime.

Crew and Passengers of the CPX-9782

Over the course of its journey, the last train to evacuate Halifax is host to a variety of refugees, warriors, madmen and sociopaths.

The Welsh-born conductor of the CPX-9782.

The protagonist of Last Train From Oblivion and the Prime Equestrian counterpart of TCB Dash's wingmare, who is mysteriously sent to Earth by the spiritual embodiments of the Elements of Harmony.

An earth pony Newfoal, former HLF member and the only known human seemingly not to fully succumb to the effects of Conversion.

A ten-year-old girl that became a member of the PER after her parents were killed. She initially wanted to become a pony like her companions, but gets forced to rethink her position when things start going down the drain.

Dragons of the East 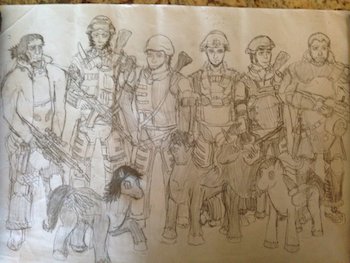 The Legends themselves. Want a bigger size? It can be found HERE

. Humans (from left to right): Khan Aitmatov, Ivan Melnik, Yon-Soo Park, Porter Stanley, Hyong-Jin Kang and Sergei Zaslavski. Ponies (from left to right): Blizzard Flurry, Firebrand, Aquamarine Glimmer and Comet Tail.
The main characters of the Asia Side-Story. By the time of the main story, they are known as one of the greatest symbols of the Asian resistance. Their members include a mixture of humans and ponies who run the spectrum from professional soldiers to civilians who've taken the call to arms. Listed below are the tropes that apply to them as a group.
Lt. Porter Stanley
Porter Stanley

An American soldier stationed in South Korea when the war began. He takes on the call to arms for especially personal reasons against the Solar Empire. He saves Yon-Soo's life and takes in Hyong-Jin, helping them train to become better fighters, unknowingly molding a group that would become a symbol of the Asian resistance.

The protagonist of the Asia Side-Story. A former celebrity from South Korea who takes the call to arms when Queen Celestia declares war on humanity.

A North Korean soldier that survived his squadron's ponification by running away. He crosses paths with Yon-Soo and Porter, and as time goes on, greatly expands his worldview.

A pegasus stallion that served as one of TCB Lyra's bodyguards before deciding to stay at the military base in St. Petersburg with Yon-Soo, Porter and Hyong-Jin.

An older Russian soldier, first seen during the evacuation of St. Petersburg alongside Melnik.

Aitmatov's partner in kicking ass, he comes along with the team after the evacuation of St. Petersburg.

A pegasus mare that fights alongside Aitmatov and Melnik.

A unicorn mare who was caught in the clutches of the Russian HLF with her pegasus daughter Comet Tail before getting rescued by Yon-Soo and his teammates.

A pegasus filly who escaped from the Solar Empire with her unicorn mother Aquamarine Glimmer and was caught in the Russian HLF's clutches before getting rescued by Yon-Soo and his teammates.

A Russian soldier that joins with the main group during and after the St. Petersburg evacuation and battle.

A refugee from Ukraine and a high-ranking member of the Bridle Path Underground. She joins the Dragons of the East.

The PER is a group of human collaborators that denounced their humanity in support of the Solar Empire. They wish to speed up the process of humanity's "salvation" by ponifying everyone, regardless of whether they want it or not.

The founder of Ponification for Earth's Rebirth. A once respected medical doctor who first pushed the ponification serum as a miracle cure, she became the founder of a terrorist cell dedicated to carrying out the Solar Empire's work. She was captured during a raid in Arizona and is currently awaiting execution.

A PER pegasus nurse with plenty of doubt weighing on her mind.

A PER woman and an old friend of Nurse Merciful Light, hailing from Portland, Maine. She gets ponified during a battle in a PHL hospital, into what can only be described as a "prototype" of a Pretty Private.

A PER woman who honestly believed in their viewpoint and voluntarily underwent ponification, only to regret her decision when it was too late. She ended up becoming the Pretty Private Nepenthe.

A PER potion bomber who joined the organization out of wanting to make the world and humanity better, only to start questioning the righteousness of his cause when Prime Equestria throws in its lot with humanity and the PHL.

The HLF is the other major resistance faction on Earth. It actually started off as the Harriet Thomas Foundation (HTF), a support group for people whose friends and family members abandoned them after taking the potion. But when the war began and more and more people became suspicious of the Solar Empire, a multitude of unsavory characters overtook the organization and militarized it. Unlike in many anti-Conversion Bureau fanfics, they're not portrayed as being remotely heroic, amounting to little more than paranoid Right Wing Militia Fanatics, Sociopathic Soldiers, or racist psychopaths. Putting it simply, they're rather useless to the war effort, serving as little more than a hindrance to humanity and Equestria alike.

The founder of the HLF, or rather the group in which the HLF had its roots. When the good reverend's ponified daughter left the family to live in Equestria, he founded a support group called the Harriet Thomas Foundation (HTF) for other people who'd gone through the same, only for things to go Off the Rails as tensions between Earth and the Solar Empire escalated.

As the HLF had its roots in a simple support group founded by a well-meaning pastor, Michael Carter (father of Verity) can be credited as the man that turned the organization into the blood-thirsty and revenge centered group it's known as today.

A former member of the HLF, mentioned a scant few times and only appearing in a flashback in Chapter 3 of Light Despondent, who was especially close to Kraber. We don't know much about him, only that he had a tendency to use chemical weapons, and he's currently somewhere in South America as of December 2022 with his brother.

An HLF unit in the middle of Truro, fighting against the PHL, they're supposedly "about the closest thing the deranged, imbecilic bigots have got to a proper special-forces unit," and deadlier than any HLF unit seen thus far. Next to The Barrier, they're likely the largest threat to CPX-9782 in Last Train, obstructing it and attacking the crewmembers.
In General
Col. Atlas Galt
Aaron Grant (Alias: Atlas Galt)

Leader of the Thenardier Guards.

Another specialized HLF unit, founded in Britain. While the other HLF units seen in the series are little more than paranoid and violent fanatics, the Reavers, headed by Maximilian Yarrow, are notable in that they refuse to attack the PHL and have been far more helpful towards the general public than the others.
In General
Maximilian Yarrow
Maximilian Yarrow

The Reavers' leader and founder.

One of Maxi Yarrow's top men and one of the few he allows to go scouting.

A member of Maximilian Yarrow's Reavers, describing himself as their "Unofficial Chaplain".

Other Allied HLF
Miscellaneous HLF units affiliated with the Reavers.

A variety of HLF units (such as the Kraken Grenadiers, the Redstripes and Kevin the Mildly Miffed) are listed as being or as having been allies of the Reavers - many of them are also listed as having been destroyed during the intervening years.

An elite HLF unit in the middle of China, containing possibly some of the most depraved individuals to be associated with the group thus far.
In General
Warlord Zhou
Feng Gui Zhou

The leader of the Blood Tigers.

A member of the Blood Tigers.

A radio show narrator from Nigeria who tells of stories on the front line of Africa, often broadcasting live.

The leader and founder of the Bridle Path Underground, a group of smugglers that help get human and pony refugees out of China.