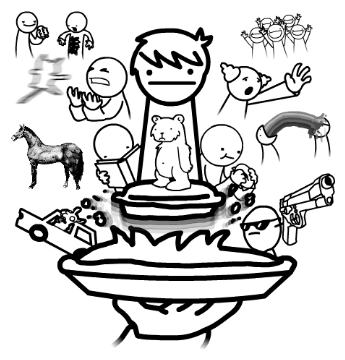 And this is just the tip of the iceberg.
"I baked you a pie!"
"Oh boy, what flavor?"
"PIE FLAVOR."
(guitar riff)
— "asdfmovie2"
Advertisement:

The asdfmovies (pronounced "ass-duff-moo-vee") are a series of short YouTube web cartoons produced by TomSka, partially adapting strips from asdfcomics, his Webcomic.

The skits are short, as are the movies overall, and their humour is random, rapid-fire and very strange, often relying on puns (usually of the Literal-Minded or visual sort), Brick Jokes, and straight-up non sequiturs, alongside the occasional dip into the macabre.

The short skits mean that knowing what's in them will spoil the gags (as they can loosely be called) very easily, so we recommend you watch the movies before reading the trope list. It won't take long.

open/close all folders
Tropes With Their Own Pages
A
B
C
D-E
F-G
H-I
J-M
N-O
P-R
S
T-Z
"Do you ever get tired of being random?"
*duckbill*
"Me neither."
Feedback