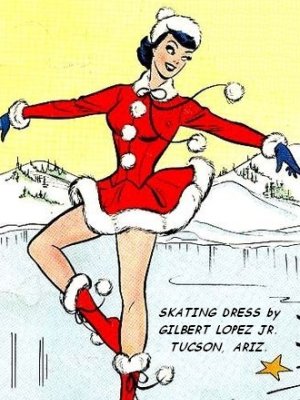 Fans have drawn so many outfits for Katy that Gil wasn't even the first to give her a white fur-trimmed skating dress.
Advertisement:

Fans are asked to send in stuff that will be incorporated into the show's Canon or Bonus Material (particularly Side-Story Bonus Art). It could range from lines of dialogue, to costume/monster/vehicle designs, to entire plot points.

A common form is to directly ask fans for stuff, and they send it in. Sometimes there is a contest for a major thing to incorporate. Credit is usually given to the senders, partly as a courtesy to the fans, and partly to avoid Plagiarism.

This may or may not be considered a good thing. If fan-created elements seem to take over the show, it can be seen as the writers going creatively bankrupt (like there is Running the Asylum). On the other hand, some elements help the fans feel like they are part of the show, helping old and new fans stay invested.

A Sub-Trope of Audience Participation (this trope requires a process to submit and apply, unlike the other forms).

Compare Caption Contest, Contest Winner Cameo, Make-A-Wish Contribution, Harpo Does Something Funny (having the actors submit stuff that wasn't in the script), Throw It In, Promoted Fanboy, Approval of God.