A group of rebel magicians who joined Solomon before he became king in order to free the non-human species that were enslaved by the humans and overthrown Alma Torran's Orthodox government.
General 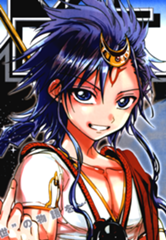 The king of Alma Torran and the leader of La Résistance in his youth. He's related in some way to Aladdin. 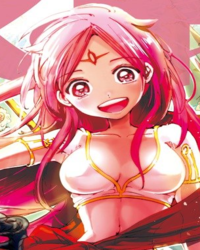 A little girl who was saved by Solomon when she was about to die from giving energy to a Mind-altering tower and the viewpoint character of the Alma Torran arc. At first, she's a fundamentalist who hates all non-human species, but eventually grows out of it and becomes a member of La Résistance and Solomon's worshipper and later, lover.

David Jehoahaz Abraham
The leader of the Magicians from Alma Torran, and the first Senator in the Orthodox's "Council of Elders". He is Solomon's father. 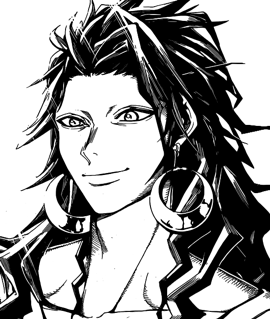 Creatures Of The Rift

Mother Dragon
An ancient dragon who resides in the rift between continents on Alma Torran.
Ill Ilah
The creator of Alma Torran.

A young manticore who befriends Sheba.

Wahid and Falan's son. At first he is just a baby, but we later see him grow older.

Staying in a dungeon until that particular dungeon is captured, they bestow their great power toward their capturer. Usually have elemental powers of some sort.
General
Ugo / Uraltugo Noi Nueph
Aladdin's djinn, stored in a flute, and his first friend. He is currently in the "Room of Fortitude", the place from where Aladdin came to this world.
Voiced by: Toshiyuki Morikawa (Japanese), Patrick Seitz (English)
Amon
A fire Djinn, unintentionally captured by Alibaba. He is known as the "Djinn of Stern and Dignified Spirits of Etiquette."
Voiced by: Hidekatsu Shibata (JP), R. Martin Klein (EN)
Paimon
Hakuei's Djinn, the Djinn of Maniacal Love and Chaos, and a Djinn of fertility. Because of this, she is capable of creating a large household of over 100 people.
Voiced by: Sayaka Ohara (Japanese), Karen Strassman (English)
Vinea
Kougyoku's Djinn and the Djinn of Sorrow and Isolation.
Zagan
Hakuryuu's Djinn, and the Djinn of Loyalty and Purity.
Voiced by: Hiroki Takahashi (Japanese), Doug Erholtz (English)
Baal
Djinn of Wrath and Heroes, Baal is one of Sinbad's 7 Djinn.
Voiced by: Hiroki Touchi
Focalor
Djinn of Rule and Submission, he's one of Sinbad's 7 Djinn.
Zepar
A Djinn of Sound, he's one of Sinbad's 7 Djinn, previously owned by Princess Serendine. He's the Djinn of Spirit and Manipulation.
Barbatos
Mu's Djinn of Nobility and Hunting, employs Power magic.
Leraje
Kouha's Djinn. She's a Djinn that uses Strength/Power magic.
Voiced by: Miki Nagasawa
Astaroth
Djinn of Terror and Meditation, he uses Fire Magic, and one of Kouen's 3 Djinn.
Voiced by: Kenta Matsumoto
Agares
The Djinn of Fortitude and Creation and one of Kouen's 3 Djinn. Uses Strength/Power magic.
Voiced by: Junji Tachibana
Phenex
One of Kouen's 3 Djinn, uses Life Magic. She is the Djinn of Kindness and Mediation.
Dantalion
Koumei's Djinn, she uses Light Magic.
Valefor
One of Sinbad's seven Djinn, he is an Ice Djinn and the Djinn of Falsehood and Prestige.
Voiced by: Kappei Yamaguchi (Japanese), Ben Diskin (English)
Belial
The Djinn of Truth and Conviction and Hakuryuu's second Djinn. Wields Life magic dealing with the five senses and mind.
Alloces
The Djinn of Darius Leoxes, King of Sasan. Grants power over barriers.
Cerberus
The Djinn of Severity and Fascination, captured by Dianus Artemyria. Has power over Fire magic, but also Lightning and Ice.
Vassago
The Djinn of Amarkhan Amun-Ra, king of Eliohapt.
Forneus
The Djinn of Rametoto, king of the Imuchakk.
Purson
The Djinn of Ignatius Alexius, implied to have Water Magic at his disposal.
Glasya-Labolas
The Djinn of Arrogance and Massacre owned by Barbarossa, uses Strength/Power type magic to manipulate Metal.
Caim
The Djinn of Acute Hearing and Absolute Sharpness, belonging to Takeruhiko Yamato, king of Kina. Seemingly controls Water magic.
Crocell
One of Sinbad's 7 Djinns.
Furfur
One of Sinbad's 7 Djinns, the Djinn of Ecstasis and Absolute Darkness.
Vepar
The last of Sinbad's 7 Djinns.