Character sheet for the supporting cast of Inuyasha. 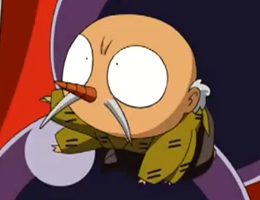 Myoga the flea youkai was once a servant of Inuyasha's father, and tries to help Inuyasha and his friends by providing useful information, although he is a coward and a bit of a lecher. He claims Inuyasha's blood is delicious, and often appears by biting Inuyasha to drink some of his blood, usually resulting in getting squashed by Inuyasha.
Voiced by: Kenichi Ogata (JP), Paul Dobson (EN), Daniel Abundis (LA SP), Mino Caprio (IT), Hughes Boucher (FR) 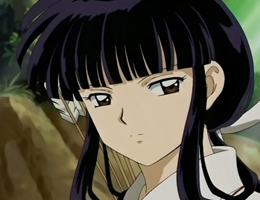 As a miko and the Shikon Jewel's guardian, Kikyo's responsibility was to purify the Shikon Jewel and keep it out of anyone else's hands. Falling in love with Inuyasha, however, led to her death, and she had the Jewel burned with her body in order to protect it, causing it to reappear within the body of her reincarnation, Kagome. However, this is not the last we see of her...
Voiced by: Noriko Hidaka (JP), Willow Johnson (EN), Georgina "Gina" Sánchez (LA SP), Francesca Guadagno (IT), Claire Beaudoin (FR)
Sesshomaru 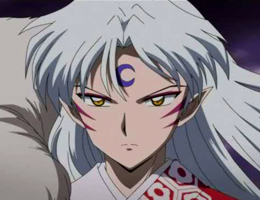 Sesshomaru is Inuyasha's elder half-brother, and unlike Inuyasha is a very powerful full-blooded youkai. He initially appears in pursuit of the sword Tessaiga, which their father had created from his own fang and left for Inuyasha to inherit; although Sesshomaru also inherited a sword, Tenseiga, he feels he has no use for it since it is a healing sword which cannot wound anyone.
Voiced by: Ken Narita (JP), David Kaye (EN), Michael Daingerfield (EN, The Final Act), Alfredo Basurto (LA SP), Niseem Onorato (IT), Phillpe Leroy (FR)
Kohaku 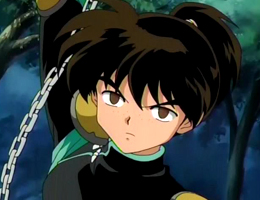 Kohaku is Sango's younger brother. Apparently killed along with the rest of the youkai hunters, he reappears not long afterwards under the control of Naraku, who uses him in frequent efforts to manipulate Sango. 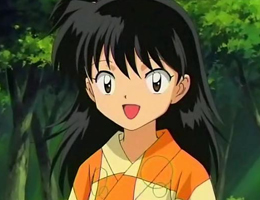 Rin is a young orphan child who encounters Sesshomaru while he is recovering from being beaten by Inuyasha. In spite of Sesshomaru's coldness, she shows no fear of him and instead develops a case of hero worship. For his own reasons, Sesshomaru allows her to accompany him and Jaken thereafter. 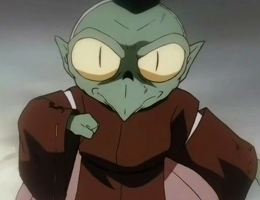 This goblin-like youkai is Sesshomaru's longsuffering and loyal retainer. He is not a very powerful fighter, but can wield the Staff of Two Heads in order to assist Sesshomaru when needed. 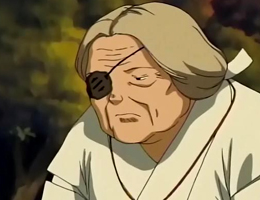 Kaede is Kikyo's younger sister and assistant. Following her loss of an eye and Kikyo's death, she became a miko herself, and is an old woman when Kagome arrives in the past and unseals Inuyasha. She recognizes Kagome as Kikyo's reincarnation, and assists Kagome and Inuyasha by providing advice and information. 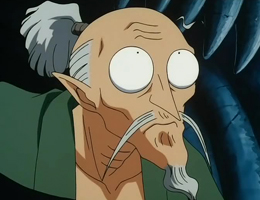 Totosai is a youkai blacksmith, the one responsible of forging Tessaiga and Tenseiga from the fang of Inuyasha and Sesshomaru's father.
Voiced by: Joji Yanami (JP), Richard Newman (EN), Paco Mauri (LA SP), Giancarlo Padoan (IT), Yann Guillemot (FR)
Kouga 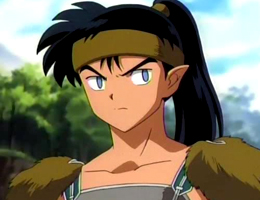 Kouga is the leader of a tribe of wolf youkai. He has collected several Shikon Jewel shards, which enable him to run incredibly fast and to execute powerful kicks. He kidnaps Kagome due to her ability to sense Jewel shards, and soon develops a crush on her, much to Inuyasha's annoyance. 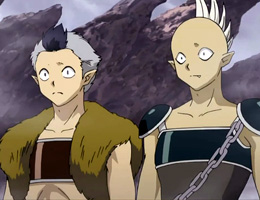 Two demon wolves of the Yoro tribe, always following Kouga around. They mostly serve as his sidekicks. 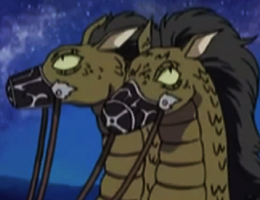 A two-headed dragon youkai and Sesshomaru's beast of burden, he had no name until Rin came along. Though typically used as a means of transportation, he is capable of fighting when the situation calls for it. 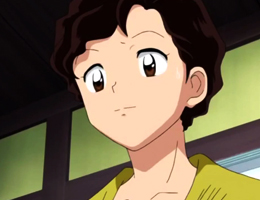 The mother of Kagome and Sōta, Mrs. Higurashi is extremely supportive of her daughter and takes much of the bizarre nature of her trips to the Feudal era in stride. 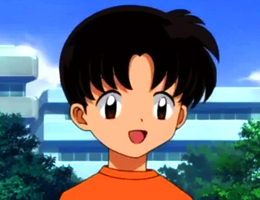 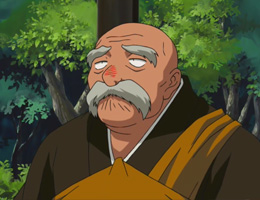 An old, fat Buddhist monk who greatly loves saké. He's Miroku's foster father and master, as well as the only person who can take care of his Wind Tunnel. 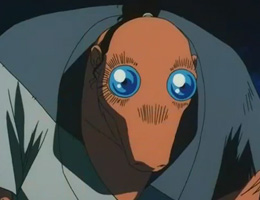 A huge half-human, half-demon character who owns a field of healing herbs along with his old, human mother. Despite his large, intimidating appearance he's a gentle and shy creature. 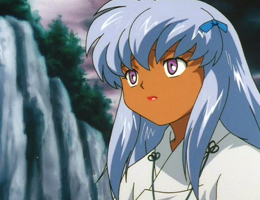 A young female half-bat demon who was kidnapped by her paternal grandfather, Taigokumaru, and forced to power their tribe's Deflector Shield. It's through her that Inuyasha gains the Red Tessaiga. 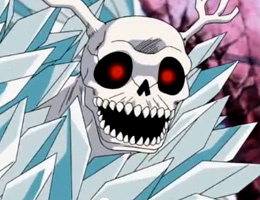 An elder oyster youkai who made faboulous gemstones while alive, including the black pearl leading to the demon's netherworld. After his death, he took a fragment of the Shikon Jewel with him to protect it. 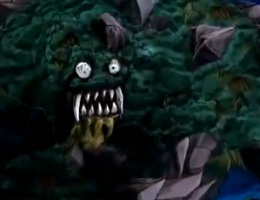 An elder mountain demon, whose aura-sealing stone was stolen by Naraku, who used it to conceal the aura of the Infant. Desperate, he asks to our heroes to help him, but is offed by Goryomaru's disciples before they can help him. 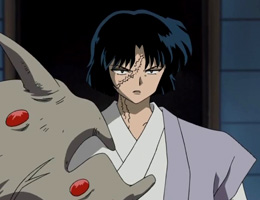 A mysterious, scarred monk with a demonic, laser-spitting arm. He takes care of some orphaned children and equips them with demon-slaying weapons, so that they may avenge their parents.

Voiced by: Masaki Terasoma (JP), Ross Douglas (EN), Emiliano Coltorti (IT)
Kinka and Ginka
The two heads of a particular youkai, who fight for control of their body. This is how their race is born, and usually the weaker head is kill long before maturity, but in their case, the two are equally matched.
Yorei Taisei 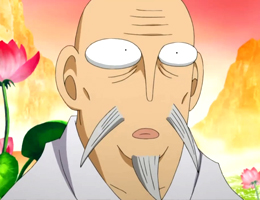 A guru demon of great wisdom and power, he tests Inuyasha and teaches him about the Yoketsu (Demon Hole), explaining him how to properly use the Dragon-Scaled Tessaiga. 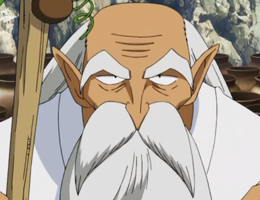 A "Master of Potions" whom Inuyasha's group consult to repair Sango's Hiraikotsu. He also gives Miroku a potion to nullify the pain of his miasma poisoning. 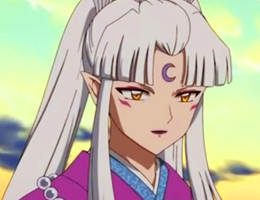 The mother of Sesshomaru, whom he consults for advice on how to perfect the Meidō Zangetsuha. 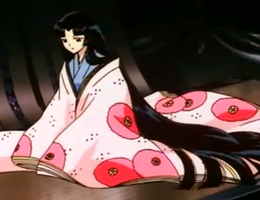 Inuyasha's mother, she fell in love with a demon and gave birth to Inuyasha. She raised him alone in the court of nobles and was herself a noblewoman who's family had fallen into ruin. Sometime before the series, she died through unknown circumstances. 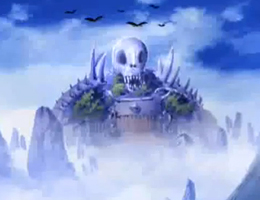 Inuyasha and Sesshomaru's father, a great demon lord who was known throughout Japan. Though he died shortly after Inuyasha's birth according to the third film, his presence is felt throughout the series in the trials and weapons he leaves to his sons, and the legacy they (especially Sesshomaru) aspire to.

While he never appeared in the anime or manga save for the corpse of his demon form, he appears in the prologue of the third film on the eve of his death. 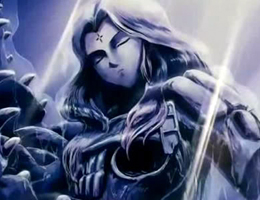 An extremely powerful miko and the creator of the Shikon Jewel.

The Twins and Baby 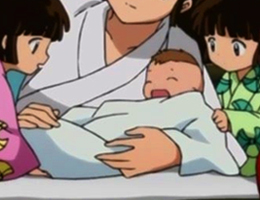 Miroku and Sango's three children, twin girls and a boy. They are introduced in the final chapter of the manga.