Click here to return to the main character index.

"It's not a question of can or can't. There are some things in life you just do."

The main character of Final Fantasy XIII. A former Sergeant of Cocoon's Guardian Corps who resigned so she could be free to rescue her beloved sister Serah from the clutches of the Pulse fal'Cie. Her weapon is a transforming gunblade called the Blazefire Saber. Her Eidolon is Odin.

She changed her name to "Lightning" after the death of her parents as part of an effort to change herself into a stronger, more confident person capable of protecting both herself and her little sister. While her new Stoic personality was perfect for the Guardian Corps, she ended up developing a Married to the Job Ice Queen persona that hindered her relationship with Serah and distanced herself from her.

The first game centers around the defrosting of this persona as she is forced to confront her failings as a caretaker and as a sister. 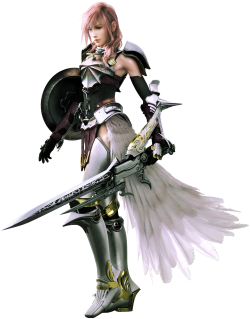 In XIII-2, Lightning has gone missing and is assumed dead by all but her sister Serah. The reality is that she has been whisked to the timeless plane of Valhalla, where she has ascended to become the protector to none other than the Goddess Etro. 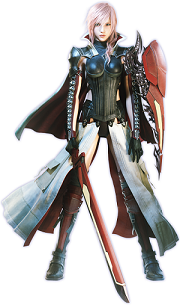 After the events of XIII-2, she crystallized herself for five hundred years so she would come back again in a later and more proper time. Now, she has to save the world from Chaos. She is the only playable character in the game.

Her personality has changed a bit from the first two games. She now is more emotionless and distant, but she still has a kind and good heart deep within her which slowly resurfaces as she does good and heroic deeds. 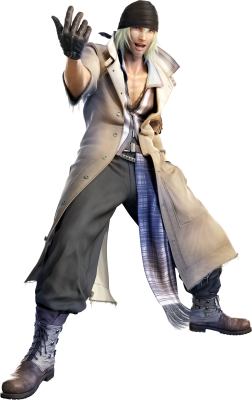 "Since when have heroes ever needed plans?"

Snow is the leader of NORA, an armed neighborhood watch that fights local monsters. When the Purge starts, they rebel against the Sanctum. He is engaged to Lightning's sister, Serah. Snow fights with his bare hands and Ice magic. His weapon is a special coat developed by the government which can alter the strength of the wearer. His Eidolon is the Shiva sisters, Stiria and Nix.

General tropes and those present in the first game:

In XIII-2, Snow has put his marriage to Serah on hold while he looks for the missing Lightning at his fiance's request. He soon disappears altogether, having been whisked into the vortex of time. 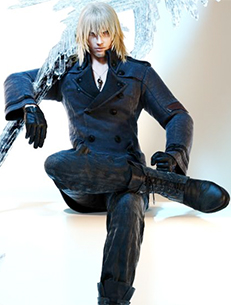 After somehow making it out of the Void Beyond where he was trapped in XIII-2, Snow becomes the Patron of Yusnaan, described as the "City of Revelry" by becoming its protector as the last of the cursed l'Cie. 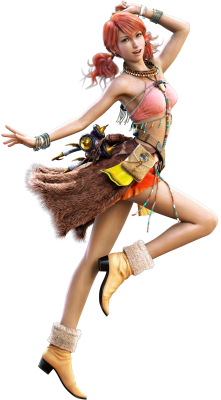 "Wishes can come true. But not if you just wait for miracles. Miracles are things we make for ourselves. Here, and now."

A mysterious girl with red hair tied up in pigtails who, despite facing hardships, is an upbeat and caring person. Her weapon is a strange kind of fishing rod. Her Eidolon is Hecatoncheir.

A professional airship pilot from Cocoon, he tags along with Lightning so that he can confront the fal'Cie. His weapons are dual pistols. His Eidolon is Brynhildr.

Running an airship flight service, Sazh and Dajh were sucked into a temporal distortion. The "Heads or Tails" XIII-2 downloadable content shows that after spending some time in the casino at Serendipity, a place that is beyond time, they then enter a time gate and wind up even further in the future, and he aids Serah, Noel, and Hope as an airship pilot.

Sazh now lives in the burnt-out wreck of a crashed airship in the northern reaches of the Wildlands. Between games at some point, Dajh's soul was fragmented and he fell into a coma. Sazh has been looking for the fragments to get his son back, but hasn't found a one. 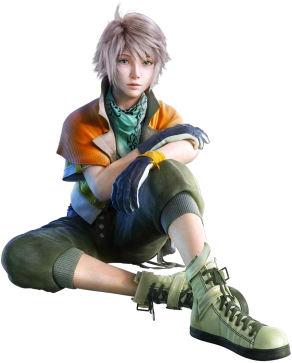 "And what if that gets people around you involved? What happens when your actions end up ruining someone's life? What if someone dies? What then, Snow? How do you pay for what you've done?"

Hope is a young boy originally from a upper-class family, which included his parents Bartholomew and Nora. His mother was killed while volunteering to help Snow and NORA, so for that he bears a grudge against Snow. His weapon is a boomerang. His Eidolon is Alexander.

In XIII-2, the 24-year old Hope is the director of the Academy, a scientific organisation born from the new provisional government of Cocoon. Together with his fellows, he is working on building a future for humanity based on human technology.

"Hope watches over Lightning from his base in the Ark, guiding the savior as she tries to carry out all-mighty Bhunivelze's divine mission. As Lightning's trusted partner, Hope provides key information throughout the quest. Mysteriously, Hope is no longer a grown man, but has instead turned back into the boy that Lightning first met." 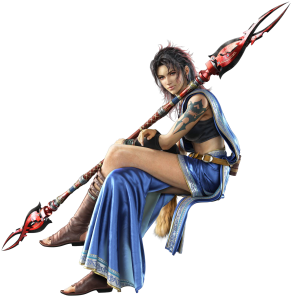 "Let Cocoon get what's comin' to them! They hate us for being l'Cie. What's it to me if they die? Better that than watch a friend go Cie'th!"

A mysterious woman from Pulse who grew up with Vanille. Her weapon is a double-bladed spear that can be split into a three-section staff. Her Eidolon is Bahamut.

After Sazh rescued her and Vanille from the Crystal Pillar at the finale of XIII-2, Fang reappears in the Desert Dunes of Nova Chrysalia, now the leader of a brigade of thieves called Monoculus.

As A Whole
Eidolons are servants of the goddess Etro, sent to l'Cie when they begin to falter on their path - not necessarily their Focus, mind.
Shiva

Snow's summon, Final Fantasy's classic ice summon manifests as a pair of Twin Sisters, Stiria (the dark one) and Nix (the light one). The first Eidolon to appear, they manifest in Lake Bresha to save him from a horde of PSICOM soldiers before turning on him for the trial.

Their Gestalt Mode turns the sisters into a motorcycle, which spreads ice when Snow burns rubber.

His Gestalt Mode turns Odin into a horse, whereupon Lightning takes up his Gagnrad and mounts him.

Although Lightning is no longer a l'Cie, she manages to forge a new pact with Odin upon arrival in Valhalla. Meanwhile, the memory of their first battle influences a paradox in Vile Peaks, leading to the manifestation of Twilight Odin.

After the end of XIII-2, the Eidolons no longer had anywhere to reside. However, Odin manages to make an appearance... The Angel of Valhalla, a white-and-green chocobo that roams the Wildlands, is the form he has taken.
Brynhildr
Sazh's summon, a flaming woman of war with a massive double-edged weapon. An original summon to Final Fantasy XIII, Brynhildr manifests in Nautilus after Sazh learns that Vanille is responsible for Dajh being branded as a Sanctum l'Cie.

Her Gestalt Mode turns Brynhildr into a sports car, with Sazh at the wheel to deploy caltrops and bombs.

Bahamut
Fang's summon, Final Fantasy's recurring dragon shows up with a humanoid structure to strike foes down with. Bahamut manifests in the Fifth Ark when the party intends to defy their fate, in response to Fang intending to follow their Focus alone.

Tropes only present in XIII-2 and Lightning Returns

Bahamut is the only Eidolon allowed to enter Etro's temple in Valhalla. Unfortunately, one of those who have summoned the dragon is Caius Ballad, who can perform an Incarnate Summon to manifest Bahamut in his own body.
Alexander
Hope's summon, Final Fantasy's big holy tower takes the form of a massive humanoid in gold and white. Alexander manifests in the Vallis Media on Gran Pulse when Hope starts to despair about his seeming worthless to the rest of the party.

In Gestalt Mode, Alexander takes the form of an extending wall covered in guns that Hope climbs atop to command.

Hecatoncheir
Vanille's summon, a hundred-handed giant born out of the earth. An original summon to Final Fantasy XIII, Hecatoncheir manifests in the Mah'habara Subterra when Vanille is trying to deceive Fang about their previous Focus to become Ragnarok.

In Gestalt Mode, Hecatoncheir takes the form of magitek armour that Vanille mounts to fire off.