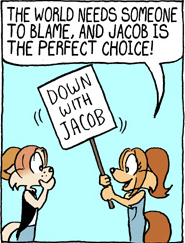 I bet Jacob wrote this caption - that's why it isn't funny.
"If we leave this to the police they will choose a culprit, right or wrong, and they will hang him. It'll probably be Mr. Marquez, for no other reason than his name is Marquez. Or Doctor Arbuthnot for the colour of his skin. You are the only one who can bring justice!"
— Bouc, Murder on the Orient Express (2017)
Advertisement:

A scapegoat is one who, willingly or otherwise, takes the blame and/or punishment for something for which he or she wasn't responsible — though depending on where the Sliding Scale Long Name is, the relative innocence of said scapegoat will also vary. Any poor sap who runs afoul of a Powder Keg Crowd can become this, especially if they have Torches and Pitchforks; 0% Approval Rating governments seem to execute nothing but innocent scapegoat victims just for the spectacle of it or to keep up the appearance that the government is tough on crime; the Glory Hound will find a subordinate to take the blame for any failure. The idea comes from a practice of the ancient Hebrews, who would send a goat carrying the sins of the people out into the wilderness as part of the Yom Kippur ceremonies.

A especially popular way to do this is through pulling off a Deceased Fall-Guy Gambit, since a dead person (bonus points if they are amongst the victims of the disaster/crime they are being blamed for), for good reasons, cannot defend themselves nor can they be tempted to attempt to point their finger at the actual culprit(s).

Sometimes, in a Distant Finale, the scapegoat is finally cleared, if not in public, then at least in the eyes of those who cared for him or her and at least hoped, if not always believed, that this scapegoat was innocent.

Compare Guilty Until Someone Else Is Guilty (where someone is the Scapegoat until the true culprit is revealed), Silent Scapegoat (where the Scapegoat volunteered for the job), Zero-Approval Gambit (where this is part of a greater scheme), Wounded Gazelle Gambit (where "Gazelle" wounds (or pretends to wound) himself to frame someone else) and Convicted by Public Opinion (where the Scapegoat is already declared Guilty Until Someone Else Is Guilty by the public because they are disliked). See also Misblamed, in which the scapegoat gets all the blame for the mistake. If the product itself is blamed for a public screw-up regardless of whether or not it's inherently flawed, that's a Disastrous Demonstration.

Contrast the Windmill Political, who among other things can be used as the scapegoat for something that hasn't even happened! Closely related to Fall Guy and Karmic Misfire if the scapegoat does not willingly take the blame and/or punishment. May overlap with Not Me This Time if the scapegoat has a legitimately deserved bad reputation that makes them an easy target for blame, and Burn the Witch! if they are accused of causing the misfortune through some sort of supernatural power. An Overzealous Underling may be used for this, (or a boss may claim that someone is an Overzealous Underling) if the boss wants to appear to keep their hands clean and reputation intact.