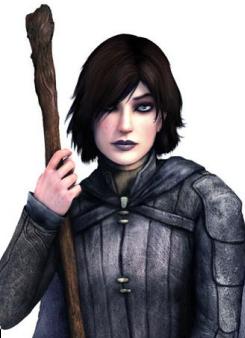 The main character of the original game, April was an Ordinary College Student living in Stark when she found herself thrust in an adventure in which she was destined to save both her world and Arcadia, the world of magic, from the machinations of Jacob McAllen and his followers, the Vanguard, using her powers as a Shifter, which allowed her to travel between the worlds. Her journey came to an unexpected end and ten years later, by the events of Dreamfall, she has become a jaded and bitter woman fighting a guerrilla war against the occupying Azadi Empire in Arcadia.

Cortez a.k.a. Mannie Chavez a.k.a. the Red Kin

A mysterious old man that tended to hang outside April's boarding house, Cortez at first seemed akin to a crazy hobo. But as the story unfolds Cortez is shown to be much more than that and winds up being April's mentor in her quest to restore the Balance.

A friend of Cortez, Father Raul looks out for his congregation at the Hope Street Cathedral in the slums of Newport.

One of April's best friends.

April's best female friend and a student at the Venice Academy Of Arts like her.

April's rude neighbor that lives across from her in the Border House.

A hapless detective whose life April tended to inadvertently ruin on her quest to save the Balance.

An obnoxious, but intelligent and experienced hacker and tech specialist. Flipper aided April in trying to get inside Jacob McAllen's headquarters.

Jacob McAllen's right-hand man, Gordon is an emotionless and cruel man that the Vanguard sought to make the new Guardian.

The sinister and charismatic leader the Vanguard, who has risen to considerable power and wealth as the head of the popular new age religion, the Church of Voltec, a front for the Vanguard's activities in Stark.

April's plucky avian sidekick whom she saved from a greedy con-man. He tends to be rather scatterbrained, but he considers April a true friend and proves to be instrumental in her quest.

The original White Draic'Kin, one of the four that created the two worlds ages ago. She first appears in a dream of April's early on the game, her importance is not fully realized until much later.

The original Blue Draic'Kin. He sleeps at the bottom of the sea and is worshipped by the Alatien and Maerum as a god.

Like April, Brian is a denizen of Stark that has journeyed to Arcadia, but unlike April he is not a Shifter so he can't return home. In the original game he lived in his seaside home in Marcuria where he languished his days away with drink. After aiding April on her quest, Brian decided to turn his life around and leave Marcuria to explore the rest of Arcadia.

An evil alchemist who has stolen the wind and has a habit of turning people who gets too close to his floating castle into stone.

The Venar ambassador to Ayrede. While the Venar usually exist out of time, Abnaxus remains in the present so he can serve his people.

The owner of the Journeyman Inn. Benrime helps both April and Zoë on their journeys.

And old storyteller living in a cozy cottage, with knowledge of April's adventures. 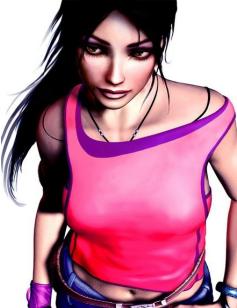 The main character of Dreamfall, Zoë is a college dropout living with her father and is Desperately Looking for a Purpose in Life. Zoë gets roped into Stark/Arcadia problems when she begins looking for her ex-boyfriend, who was investigating WATICorp's Project Alchera. 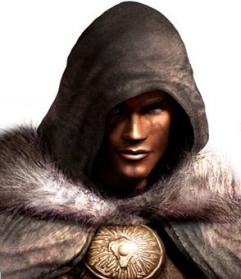 The second new playable character in Dreamfall. Kian is an assassin and missionary from Azadi, sent to Marcuria to hunt down "The Scorpion". Kian is deeply religious man, but is not blind in his zealotry, unlike his compatriots.

Zoë's ex-boyfriend and an investigative journalist.

Zoë best friend. Liv is a hacker who owns and operates Alien the Cat, a technology store in Casablanca.

A WATI programmer that Reza contacted.

Zoë's Watilla, a toy bot. She has owned Wonkers since she was four.

The founder of WATICorp who still commands his company after 150 years.

Peats's second in command and the public face of WATICorp.

A scientist working for JIVA. Zoë's adventure began when Reza asked her to pick up a package from Helena.

A Marcurian beggar whom Zoë meets in front of the Journeyman Inn. He is not actually blind, but he could be, so his full name is Theoretically Blind Bob—he just often omits "Theoretically" because it's so long.

A mysterious robed figure in Marcuria who seems to represent the Six.

The newborn White Dragon April helped hatch in The Longest Journey, currently living as a human in the Dark People's Library.

The commander of the Azadi forces stationed in the Northlands. Born to a noble family, Vamon has had a chip on his shoulder about Kian for as long as he has known him, due to his low birth and quick ascension through the military ranks despite this status. He also appears involved in a mysterious conspiracy, sometimes meeting with the Prophet and Sister Sahya in secret...

The Azadi governess of Northlands, ruling from the Great Azadi Tower in Marcuria. Like Vamon she apparently has a hidden agenda that she is trying to keep secret from the The Six.

The Six, Empresses of Azadi

The heads of the Azadi Empire and the Goddess religion.

A Zhidmari healer who recently joined April's rebels against the Azadi.

The mysterious and apparent caretaker of Dreamtime.

A mysterious girl that keeps appearing before Zoë to ask her to save April Ryan.

The Undreaming is unchained.

. She appears as a playable toddler in the first interlude at the end of Book One.

Owner of a robot junk shop in Europolis, Stark and an acquaintance of the late Burns Flipper from TLJ and the late Olivia de Marco from Dreamfall. Originally from India, now in her late 20-ies.

Zoë's psychotherapist who helps her restore her lost memories.

A food vendor in Propast, with whom Zoë tries to be friends but their different political agendas can put a strain on their relationship (Nela is a Marxist, Zoë supports social democrats).

Reza's editor at the Hand That Feeds and Zoë's admirer.

The de facto leader of the teenage gang, "The Dragonflies", in Propast, who disappeared several days before Queenie asks Zoë to find her. She is a Dreamer like Zoë, although her powers are presumably a lot weaker.

A "Corporate Jäger", i.e. a Bounty Hunter employed by corporations to take care of dirty, off-the-books business. He haunts Zoë as she is trying to establish a new life in Europolis.

The Samare leader of the resistance.

A Dolmari resistance member with a old grudge against Kian that he is still hoping to pay back some day.

The nephew of Benrime Salmin. He used to be a merchant who frequently traded with the Azadi, but after his aunt was imprisoned in the previous game, Jakai realized the error of his ways and joined the resistance.

The publican of the Rooster & Kitten Pub. He works as an informant for the resistance

A Dolmari street urchin who assists the resistance. His parents were taken were taken to the prison colony by the Azadi.

A female Banda who is the leader of Marcuria's criminal underground (pun fully intended).

A young lady from Marcuria who meets with Kian in Book Two.

One of heads of the Azadi's military.

A former teacher of Kian's and Anna's, Mother Utana is an elderly woman traveling with the First and General Hami.

An engineer involved in the operation of the machinery running all throughout Marcuria.

The leader of The National Front for Faith and Family. He is currently running for the post as Leader of the City Watch in Marcuria and it is a Open Secret that he is a collaborator with the Azadi.

The administrator of the Azadi concentration camp on Ge'en.

The first Dreamer, and the creator of the universe.