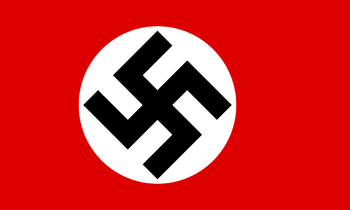 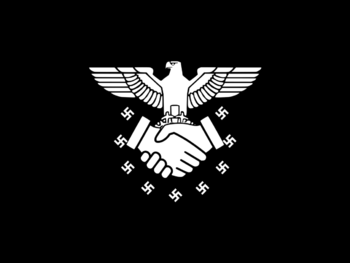 Official Name: Großgermanische Reich der Deutschen NationTr. Great Germanic Reich of the German Nation, Schutzzone Germania (Speidel's Germania), Deutsche Sozialistische Republik (RAF's Germany)
Ruling Party: Nationalsozialistische Deutsche Arbeiterpartei
Ideology: National Socialism
After a series of stunning victories against France, the Soviet Union and the United Kingdom, Adolf Hitler's new order was to reign supreme for a thousand years. Instead, cruelty, arrogance, corruption and incompetent leadership has brought the Reich to the brink of economic and military collapse. As the new decade turns, Germany's status as a dominant world power is threatened by an increasingly bloated military, a dysfunctional economy reliant on slave labor and a vast number of enemies both external and internal. Now as the Führer's life draws to an end, ambitious men plot to take over the crumbling empire by any means necessary.
General Tropes 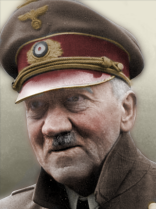 Party: Nationalsozialistische Deutsche Arbeiterpartei
Ideology: National Socialism
The most influential man of the 20th century and the architect of the Nazi empire, Adolf Hitler found peace in retirement. As a result of his deteriorating health and his exacerbation with the toxic politics of the Reichstag, he's become something of a figurehead for the German government while relegating more and more work to his underlings. Even with all the disasters that have befallen the Nazi Empire since the war, Hitler has remained a potent symbol for the German people to rally behind. However, as the Führer's myriad health problems worsen, many people fear that Germany will be torn apart by rival factions in their desire for absolute power. Germany silently awaits Hitler's decree of choosing his successor, but it is obvious that there are a lot of people in the Reich who won't agree with their leader's final decision...
Albert Speer 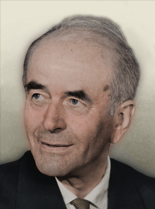 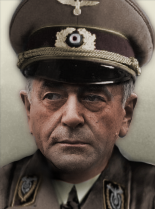 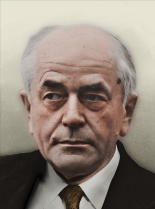 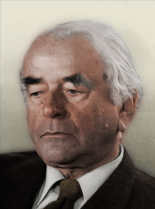 Party: Nationalsozialistische Deutsche Arbeiterpartei - Reform
Ideology: Fascism
Once, Speer was but a simple architect in post-war Germany. But he managed to earn the trust of Adolf Hitler, and became Germany's chief architect and minister of armaments throughout the Second World War. Mastermind of Germany's slave system, he built a war machine that ought to have been unbreakable. Of course, it was not, and with the collapse of Germany's economy, Speer came to believe that the slave system was to blame, and began calling for the abolition of his own creation.

Unbeknownst to him, this would mark another unexpected turning point for him: he has managed to tap into the fury of the German youth, who have grown up in a system utterly destroyed by the Nazi empire. With Speer as their champion, they rally to end the system that destroyed their future. Time will tell if Speer can rally his followers to reform Germany towards a humane future, while preventing the order of old from dragging it back into the darkness... or burning the Reich down for good. 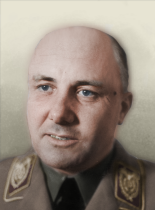 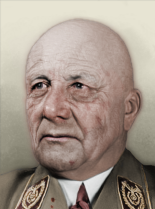 Party: Nationalsozialistische Deutsche Arbeiterpartei - Konservativ
Ideology: National Socialism
A veteran of German court policies and one of the closest confidants of the Führer, Parteikanzler Martin Bormann emerged as the leading voice of conservatives in the Reich and one of the most popular politicians among the German people. Beloved by the common folk for his simple messages of preserving safety and stability in the country during such tumultuous times and feared by his rivals for his cunning nature, Bormann proved himself to be an efficient power player, but one can wonder if one man is enough to keep Germany strong as it was before and live up to his promises of stability when the Reich is crumbling under its very foundation...
Hermann Göring 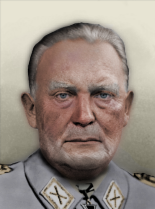 Party: Nationalsozialistische Deutsche Arbeiterpartei - Militarist
Ideology: National Socialism
The former Minister of Aviation, Reichsmarschall Hermann Göring has become the public face of a large group of hardline militarists from both the military and the Nazi old guard, united by their beliefs that Germany can bring the Glory Days back by launching a new series of military adventures around the world. Göring initially attached himself to the hardliners in an attempt to bolster his own power, but has found himself becoming their puppet instead. As the militarists grow in power and embolden by the day, Göring finds himself in increasingly deep waters. 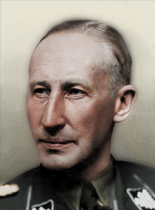 The brutal and fanatical Reichsführer of the German SS, Reinhard Heydrich is utterly loyal to Heinrich Himmler and the principles of the Burgundian System, and desires to totally reshape Germany into a Spartanist state.

For his tropes, see his dedicated subpage. Unmarked Spoilers Ahead! 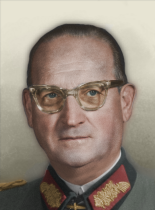 Party: Oberkommando der Wehrmacht
Ideology: Despotism
A proud Wehrmacht general, Speidel first acquired his fame across Germany for his coup against the rebellious Eastern SS divisons during the West Russian War, an act which managed to prevent civil war between the Reich and the SS in the 50s. The rising star of the German military, Speidel has managed since then to secure the Wehrmacht from a militarist takeover by Schörner and earn love from the population for his military valor, overshadowing his former master Erwin Rommel. Speidel is not a man of politics and doesn't associate himself with any of the factions that are thirsting for power in the Reich, fearing that military rule over Germany would bring the country to ruins, but there is no doubt that Speidel will make a stand for the interests of the German people, not party bureaucrats, when the imminent political turmoil hits.
Ferdinand Schörner 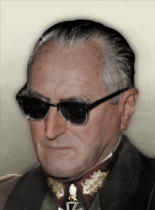 Party: Nationalsozialistische Deutsche Arbeiterpartei - Orthodox
Ideology: Ultranationalism
Ever since the Second World War, Field Marshal Schörner has desired glory and power for himself, but his plans have always fallen short. Speidel outsmarted him during the West Russian War, preventing him from seizing control over the German war machine. Now, humiliated yet unbroken, Schörner has secured a position of leadership within the German militarists, and manipulates their powerless figurehead Göring to do their bidding. As tensions rise and conflict approaches, Schörner will have many more opportunities to reach the heights he was always destined for.
Otto Ernst Remer 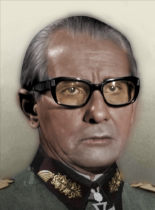 Otto Ernst Remer, once a career soldier in Germany's Heer, found his way into the position of Schörner's right hand man following the German market crash. Ambitious and opportunistic, Remer is considered to be the maddest of the Militarist mad dogs, his vision of conquest matched by few in the Reich. 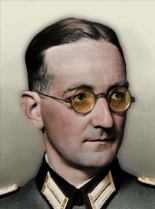 See his entry on the Southern Africa subpage under Reichskommissariat Zentralafrika.

The Wehrwirtschaftsführer are the leading military industrialists of the Greater German Reich, directly controlling the vast amounts of industry across Germany, and holding millions of underclass populations as forced laborers. 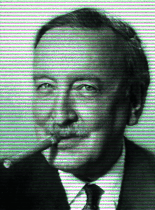 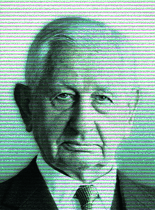 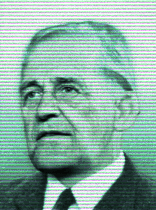 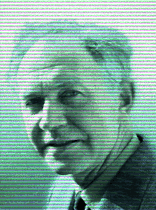 General Tropes
Party: Nationalsozialistische Deutsche Arbeiterpartei - Abtrünnig
Kurt Georg Kiesinger, Helmut Schmidt, Ludwig Erhard, Henning von Tresckow. The main political allies of Albert Speer since the 50s, they become the leading figures in the politics of Germania when he wins the German Civil War. Putting their talents to use for the benefit of the Reich, they come as the main force behind Speer's reforms.

While the Gang is a tower of strength for Speer's reformist beginnings, their service to the Führer is a double-edged sword, as each of the ministers has a vision of his own, often misaligned with those of their leader. It won't take take long for contradictions between the Gang and Speer to expose itself. 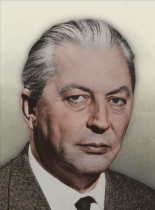 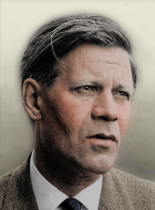 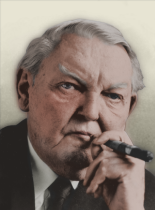 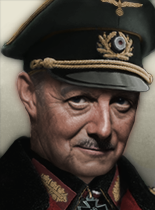 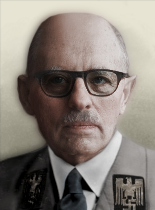 The chief of the Reichsnachrichtendienst, the main foreign intelligence agency assembled under the reign of Speer. 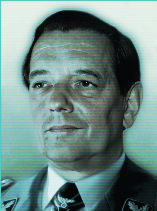 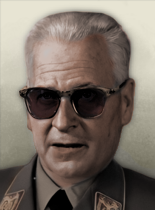 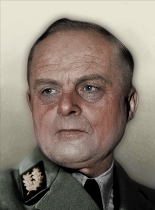 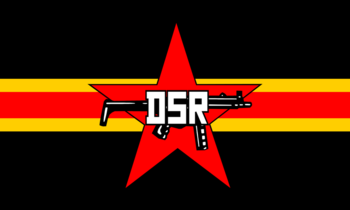 Flag of the Deutsche Sozialistische Republik

Speer's support base is a wide and varied one, among which includes liberals, reformists, and radical student activists. Of the latter, the Red Army Faction is the most radical among them all, their revolutionary fervor and ideological radicalism considered troublesome even within Speer's movement. Though initially willing to work with Speer, the Red Army Faction may decide to take things into their own hands if the German Civil War collapses into the nightmarish German Anarchy... 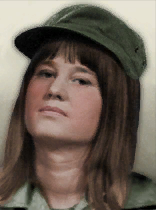